From Islam in Israel to Catholicism in Little Rock 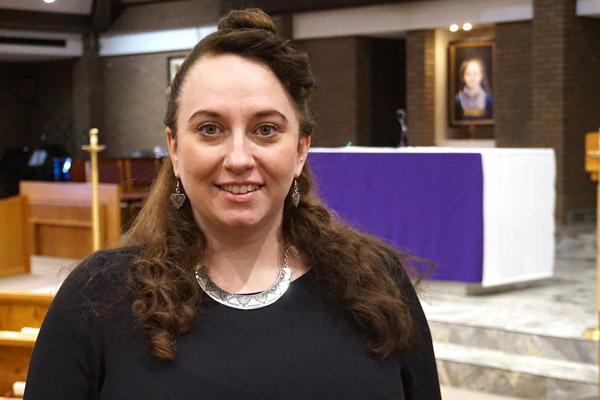 Aprille Hanson
Yasmin Hamad smiles in the sanctuary at St. Theresa Church in Little Rock. The 32-year-old said she feels “comfortable spiritually” in the Catholic Church and is converting from Islam.

Aprille Hanson
Yasmin Hamad smiles in the sanctuary at St. Theresa Church in Little Rock. The 32-year-old said she feels “comfortable spiritually” in the Catholic Church and is converting from Islam.

When Yasmin Hamad first stopped wearing hijab, it was more than just removing her head to toe covering. She was leaving behind her Islamic traditions.

“Once you start covering, it’s part of you. That’s how you are identified. They don’t see your body and they have to identify with your mind and who you are. At first it was, it was really hard,” Hamad said. “I remember the first day I went out without hijab, I actually took one with me and put it in the seat of my car because I didn’t know if I could do this all day long.”

Hamad, 32, attends RCIA at St. Theresa Church in Little Rock and will join the Catholic Church this Easter. She was born in Palestine, growing up in Gaza where she practiced Islam. Her father was Palestinian and her mother Cuban.

“Where I was from in Gaza we were under occupation the whole time. It was bad, but we kind of had our own little area. If everything was good, it was good. But when it was bad, it was really bad,” she said. “I remember the sirens; we’d have drills and stuff for air raids.”

Hamad was 4 years old when her father died from pneumonia, caused from declining health after being shot amid the fighting while traveling across the border to work in the West Bank. They went to rural Cuba, a place of beauty that Hamad loved, where her mother’s family raised sugar cane. Her mother died from cancer four years later.

When Fidel Castro announced in the early 1990s that he would not prevent refugees from leaving Cuba, Hamad’s family sent her with Amnesty International at 9 years old.

“Everyone was afraid to speak any language other than English,” she said of fellow refugees. She is fluent in Arabic and knew little Spanish when placed with a foster family in Virginia. “I just had to really learn English very quick.”

Another foster family in West Virginia adopted her at 13 years old. She didn’t follow a religion as a teenager, though her adopted mother, now her best friend, is a Southern Baptist.

“I believed in God, I knew there was a God, but I didn’t understand the whole concept of different religions,” she said.

While attending the University of Missouri in Columbia, majoring in international studies with a minor in religious studies, a close Palestinian friend invited her to the mosque.

“Then I got immersed into the Islamic religion. When I first walked in, it was almost like I felt this is where I’m supposed to be,” she said. “I just remembered the sounds and everyone speaking Arabic, it almost felt like it was normal, like home. Like all religions, it has its good and its bad.”

She married a Muslim man, who is half Arab, and had a son, now 13. He wasn’t as strict with Muslim tradition, but “he did require me to cover” with only her face showing and had the final say on decisions. They eventually divorced and she moved to Arkansas with her family where she attended the University of Arkansas Little Rock. She met and married another Muslim man from Saudi Arabia in 2014. Besides requiring her to cover, she could only work in a female-dominated environment. She could not have conversations with men unless he was there.

“There was just really no freedom. I know a lot of times it was just culture, but I started to see the sides of Islam that were not really part of my mindset, my thinking,” she said.

When she left her second husband, she considered exploring a new religious path. Hamad discussed various faiths with her religious studies professors and attended services, including a Buddhist service.

About a year and a half ago, a friend introduced her to Alberto Basilio, originally from Mexico, who attended St. Edward Church in Little Rock.

“At first I was very nervous because I was not used to talking to any guy,” she said. “His family was very welcoming, and they were the ones who were like, ‘Come to church with us.’”

She lives closest to St. Theresa and began attending RCIA. Two things that stuck out most were “in Catholicism they believe that anybody from any religion can go to heaven” and giving the sign of peace at Mass, which is the same greeting in Islam, “As-salamu alaykum.”

“I just really love it. Everything about it makes me very comfortable; comfortable spiritually,” Hamad said of Catholicism, including different cultures coming together to worship in the universal Church.

She is still dating Basilio and his aunt is her RCIA sponsor.

“Jesus is not a prophet anymore; he’s the Son of God. Other than that, it’s been a very easy transition,” she said.

However, Hamad has lost some Muslim friends.

“One of the biggest sins in Islam is to turn away from the religion. They talk about it on the news sometimes, if people turn away from the religion in other countries, especially overseas the punishment is beheading,” she said, but that moving toward a new faith “is just a stepping stone for me to freely express how I feel. I didn’t have the opportunity to do that in Islam, so it’s nice. It’s almost like a deep breath.”

At the Rite of Election March 10, Hamad said meeting Bishop Anthony B. Taylor “was almost like meeting a superhero … someone who has devoted his whole life to make other people happy.”

Looking toward Easter, she’s excited to freely accept Jesus and the Catholic faith.

“I didn’t have a reason to fear anymore. Christ was going to be the one that gave me the option of whether I was going to heaven or not.”