Sacred Heart’s Bailey Roscoe is the ‘I’ in team 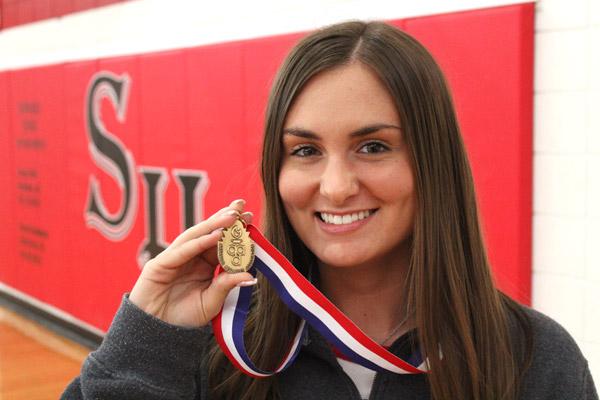 Dwain Hebda
Bailey Roscoe displays her state swimming gold medal, four years in the making. Roscoe founded the swim team at Sacred Heart School in Morrilton and for four years has been its only athlete.

Dwain Hebda
Bailey Roscoe displays her state swimming gold medal, four years in the making. Roscoe founded the swim team at Sacred Heart School in Morrilton and for four years has been its only athlete.

Like all current senior Rebel athletes, Bailey Roscoe’s banner-sized portrait hangs in the Sacred Heart High School gym. Among basketball players a-plenty — baseballers and softballers, too — Roscoe’s portrait stands out as the only one up there for swimming.

She’s rather used to it by now.

“I’m the only one, I’ve always been the only one,” she said with a sly half-grin. “But I did start my own team.”

That’s right: Bailey Roscoe is not only the lone senior on the squad, she was the lone freshman, sophomore and junior, too. In fact, she’s been the lone aquatics emissary here for as far back as anyone can remember.

“You’re not going to improve as long as you keep comparing yourself to other people. You just have to love what you do.” Bailey Roscoe

“They did not have a swim team here,” Roscoe said. “In ninth grade, I decided to start my own.”

Roscoe started swimming in elementary school and showed the natural talent coaches always clamored for. And there were many: Her military household moved so often, by middle school she’d competed for clubs from New Jersey to Hawaii.

Settling in Conway, Roscoe enrolled at Sacred Heart in eighth grade, a homecoming of sorts. Both maternal grandparents are longtime Morrilton educators; her grandfather, Brian Bailey, is former principal at Sacred Heart and her mother, Jennifer Roscoe, is now school counselor. If Bailey ever felt like a fish out of water, it quickly disappeared like ripples in her wake.

“It’s a family,” she says of her small school, warmly.

But it was a family without a pool, let alone a swim team, until Roscoe’s Conway club coach agreed to sponsor her program. Club practices doubled as school team workouts and what workouts they were — in the pool at 5:30 a.m. and in the evening until 9:30 p.m., for two to four hours every day.

“Nobody wants to get up at 5 in the morning. Not any kid,” Jennifer Roscoe said. “But I never had to force her to go to practice.”

Roscoe wasn’t just committed, she was good. So good, she could analyze her form in the water, which was handy considering her club coach only attended post-season meets. During the regular season, she was on her own.

The combination of natural talent, work ethic and precision tuning paid off: As a freshman, Roscoe took second at state in the 200-yard freestyle; then silvers in the 200 free and 100-yard butterfly as a sophomore. She also excelled in club meets, advancing to multi-state competitions against some of the nation’s best talent.

Roscoe wasn’t a machine, however. Commitment and natural ability did little to overcome a chronic lack of confidence expressed in crippling pre-race nerves or scathing self-analysis.

“For a long time, I would have breakdowns before big meets. I could not handle the pressure,” she said. “Technique in the water, I’m a perfectionist. Everyone’s like, ‘No, that looks fine,’ but I know better. I want to make it the prettiest stroke I can. I’m very judging on myself on that.”

Mental and physical demands caught up with her junior year when a shoulder injury and shingles forced her worst state showing (top five in two events, but no medal). She wondered if she’d played out her string.

“I almost quit swimming,” she said. “I had a meeting with my coach and told him ‘If I don’t love it (senior) season, I’m walking away.”

Roscoe qualified for the 2019 state meet but her 200-yard
freestyle, traditionally her strongest event, finished a disappointing third. This did little for her confidence going into the 100-yard butterfly final, scheduled practically on top of the freestyle.

“It was hard,” she said. “I had to get myself recovered and mentally prepared in 20 minutes.”

As she’d done many times before, Roscoe turned to prayer for strength and calm. The cradle Catholic was famous for writing verses on her wrist and on top of her feet, to be the last thing she saw before the liquid cocoon enveloped her. She can’t recall how many times she whispered something skyward, but she’ll never forget the day God talked back.

“When you train every single day for so long, you know what a good day is, what a bad day is, how your body feels,” she said of that final race. “It was the best I’d felt in a long time.”

Roscoe exploded in :59.50, winning by nearly 2.5 seconds, a runaway in swimming terms. Touching the wall, the literal one-woman team had exorcised the demons of her own expectations, propelled for — and by — her entire school.

“Everyone was so excited; word got out fast. By the time I changed and walked outside, I had 30 or 40 messages,” she said. “It was crazy. It was like everything you’ve been through just all came together.”

As she heads to Hendrix College in Conway, where she signed to the swim team, it’s unlikely another Rebel swimmer follows Roscoe’s lead. A few peers were inspired to look into the sport but, “when you tell them practice is at 5:30 in the morning, it’s ‘I’m out,’” her mother said.

Bailey is philosophical about the medal she worked so hard for. It’s smaller than she imagined; other people are more excited by it, actually. She’s more grateful for the lessons learned chasing it.

“Believing in yourself is easier said than done,” she said. “I’ve always had a problem with carrying everything with me. All my losses, wins, it all just piled up inside me. I critiqued myself so much it got to where I thought I wasn’t good enough. I thought I never would be good enough.”

“What I learned is, you have to be happy with what you’re doing. If you don’t enjoy what you’re doing, it’s never going to go far. You’re not going to improve as long as you keep comparing yourself to other people. You just have to love what you do.”