James is moved by the spirit in more ways than one 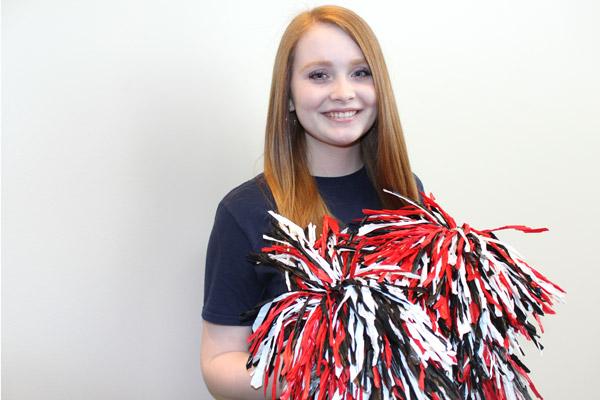 Dwain Hebda
Pocahontas’ Abbey James shows off the pompom skills that are part of her repertoire as a member of her high school’s sideline and competitive cheer squads. James has participated in the sport since grade school.

Dwain Hebda
Pocahontas’ Abbey James shows off the pompom skills that are part of her repertoire as a member of her high school’s sideline and competitive cheer squads. James has participated in the sport since grade school.

You’d think for a cheerleader as experienced as Abbey James, there wouldn’t be anything about the sport that fazes her anymore. A junior at Pocahontas High School, she’s been whipping up crowds on sidelines and wowing them at competitions since she was a fourth-grade tot.

But some things, she said, you just never get used to. Tryouts, for example, which are an annual fact of life even for a stalwart veteran such as herself.

“I swear it gets more nerve-wracking every year,” she said. “It’s just the fear of what if I’m not good enough to be on it this year.”

“I just love being on the team with such a close group of girls. I love cheering on the football boys and the basketball boys. I get to watch the game up-close and also it makes you feel a part of it when they win.”

“In YAC, you have to act silly and be a leader in front of all these kids. I feel like cheer helps that.” Abbey James

Cheerleading is a sport that doesn’t get a lot of respect and few people outside of the athletes themselves or their families appreciate the amount of time and work that goes into it. For James, 16, the yearly routine of practice, competition, camps and games has been a labor of love. Even the injuries — and there are lot of them — don’t dilute the joy or commitment she feels for her squad.

“I haven’t been majorly injured, but once I had a (fellow squad member) land on my head and knocked my neck out of alignment. I had to go to the chiropractor,” she says matter-of-factly. “Lots of bumps and bruises.”

Her participation started as much out of a distaste for basketball as a love for cheer, as these were about the only things open to a fourth-grader at St. Paul School where she attended through sixth grade. She landed on a pee-wee squad that cheered during local football games and was hooked.

In seventh grade she made her first tryout sideline squad and earned a spot on the competition squad as a freshman, both of which she’s continued ever since. This bumped her practice commitment from four hours a week and a summer cheer camp to every day and cheer competitions throughout the school year.

“Competition is completely different from sideline,” she said. “During competition, we start practicing in June and we have at least one practice a week to work together. And then we have a competition coach come in and help with our team. Once school starts, we have competition practices every day throughout the week from 3:30 to 5:30 p.m.”

All that practice paid off with a top five showing at the state cheer championships last year, something she called a competitive highlight. But it’s also given her additional opportunities to put her faith on public display as well.

“Every time a stunt would go wrong, I would just sit there and pray about it or I’d have my own separate time where I would sit there and talk to God about the competition,” she said. “On the team, there’s a few other Catholic girls, so usually before every competition we’ll get in a big group and we’ll pray. That’s just a special bond with all the girls. It’s really great.”

Cheer also brought out James’ leadership qualities and she’s put these skills to work in her faith life, too. As a member of the diocesan Youth Advisory Council, her time on the squad helped her get into the swing of the group’s activities.

“I have been going to these YAC events since I was in ninth grade and I just loved all the energy and how outgoing they all are,” she said. “I loved the close friendships they have, so I decided to do it because I like to meet new people. I like to do outgoing things. I also wanted a way that I could get closer to the Church and closer to God, so I decided to try out for YAC and I love it.”

“I would definitely say (cheer) helps me get more comfortable in front of crowds because when you compete, you have to go out in front of tons of people. Then in YAC, you have to act silly and be a leader in front of all these kids. I feel like cheer helps that.”