A Catholic you want to know: Lee Bass

When it’s a good cause, the Holy Souls parishioner just can’t say no 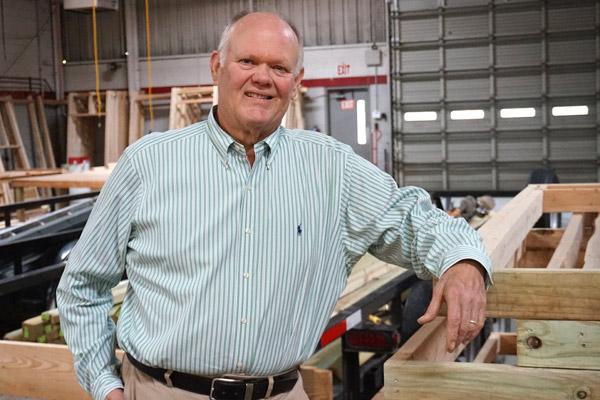 Aprille Hanson
Lee Bass, a board member for Habitat for Humanity of Central Arkansas, stands in the Habitat warehouse in Little Rock where lumber is stored and prepped before houses are built.

Aprille Hanson
Lee Bass, a board member for Habitat for Humanity of Central Arkansas, stands in the Habitat warehouse in Little Rock where lumber is stored and prepped before houses are built.

Why you want to know Lee Bass: A cradle Catholic and farm boy from Southeast Arkansas, Lee Bass has lived out his faith by rarely saying no when asked to help. Most prominently, he has volunteered with Habitat for Humanity of Central Arkansas the past seven years. He served on the construction team and for a year as interim executive director until March. He is now back on the board of directors. He has helped with the construction of about 70 houses, mainly as part of a group of older volunteers known as the “Over the Hill Gang.” As a 44-year parishioner of Our Lady of the Holy Souls Church, he currently serves as a Eucharistic minister and along with his wife Agnes, they began the sponsor couple program for marriage preparation, which has since spread throughout the state. He still has a farm in Gillett (Arkansas County), growing rice and soybeans.

Parish: Our Lady of the Holy Souls

Education: Bachelor’s degree in civil and structural engineering from the University of Arkansas.

In his own words

What feeds you spiritually?
I realize God has sent me several messages that said “Lee, I’m giving you these talents and skills,” not that I’m anything special. “But I’ve given you these talents and skills and I expect you to use them.” … I try hard not to say no to people in need. Because I realize, “by the grace of God, go I.” There’s so many good causes, so when Settled Souls calls and says “Lee, can you help with pickup?” or when Jericho Way calls and says, “Lee, I’ve got these people that are sleeping on the ground, can you help?” “Lee, Helping Hand needs groceries for this, can you help?”

Your wife encouraged you to get involved with Habitat for Humanity after one of several retirements. What has it meant to you?
I thought they give these houses away to people who probably don’t deserve it … I figured out that many of these folks are working two or three jobs just to make ends meet. Habitat, when you build a house for somebody like this they typically are renting a place for close to $1,000 a month and it’s lots of times (a place) you or I would not live in. And we can put them in a brand-new house with top quality equipment, air conditioning, very energy efficient, a great house and their mortgage payments are between $300 to $400 a month.

You helped build the Pope Francis House for Habitat in 2015 (which an out-of-state donor paid for to honor the pope). Is there anything that Pope Francis has said that has really impacted your spiritual life?
When I started reading about Pope Francis and his love for those that are underserved or underprivileged, again it goes back to I realize I’m no better than anyone else. “To those who much has been given, much is expected.”

What are your hobbies?
I’m an administrator of Woodruff Community Garden over behind the Boys and Girls Club … I get to can and put up vegetables and use my mama’s recipes for canning pickles and sauce … My wife and I love to travel each year. We’ve got a bucket list that seems to never end, but we always knock something off.