Activist priest, once labeled a ‘troublemaker,’ dies at 91 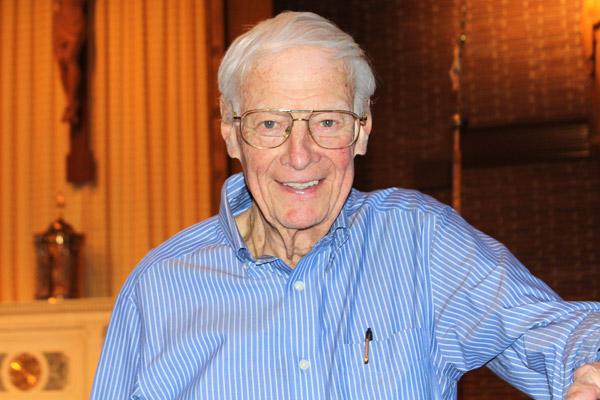 Dwain Hebda, Arkansas Catholic file
Msgr. John O’Donnell is pictured in the St. John Center chapel in May 2014 when he celebrated his 60th anniversary of ordination.

Dwain Hebda, Arkansas Catholic file
Msgr. John O’Donnell is pictured in the St. John Center chapel in May 2014 when he celebrated his 60th anniversary of ordination.

Msgr. John F. O’Donnell, a champion for social justice and a diocesan priest for 65 years, died April 20. He was 91.

Msgr. O’Donnell was born Jan. 29, 1928, in Philadelphia to Irish immigrants Henry and Bridgett O’Donnell. Though he dreamed of military life, World War II ended before he graduated from high school. Msgr. O’Donnell said during a 2014 interview with Arkansas Catholic on his 60th jubilee as a priest that the nuns at Northeast Catholic High School in Pennsylvania always talked about vocations.

He attended St. John Home Mission Seminary in Little Rock and was ordained May 27, 1954.He began as associate pastor of St. John Church in Hot Springs. After spending a year at Catholic University in Washington, he taught five years at Catholic High School in Little Rock. Throughout the years, he served in several parishes, including Our Lady of the Holy Souls and Our Lady of Good Counsel, both in Little Rock, St. Patrick Church in North Little Rock, Holy Cross Church in Crossett, St. Peter Church in Wynne, St. Joseph Church in Pine Bluff and spent the last 20 years of his ministry at Immaculate Conception churches in North Little Rock and Fort Smith. He retired in 2006.

A staunch advocate for civil rights, Msgr. O’Donnell marched for support of integration in Little Rock. In 1965, following the first wave of marches from Selma to Montgomery, Ala., where black people were protesting for their right to vote with no restrictions, Msgr. O’Donnell walked on the infamous Edmund Pettus Bridge. Msgr. O’Donnell, along with a handful of other priests, was considered a “troublemaker,” he admitted in a 2015 Arkansas Catholic article, when it came to speaking out for social justice and being involved in interreligious dialogue.

“My viewpoint was that we ought to be at the forefront of peace and racial justice and common sense and respect,” Msgr. O’Donnell said. “Jesus said we’re supposed to love each other and this is supposed to be the land of the free, the home of the brave, the United States of America.”

Despite the pushback at the time, he was a social justice pioneer who loved his parishioners and they loved him in return. He was embraced wherever he went.

“Practice what we preach and what we preach is the brotherhood of mankind. We’re all brothers and sisters under God and the Church always preaches justice and cooperation and reaching out to the disenfranchised, taking care of the poor people,” Msgr. O’Donnell said in 2015.

A memorial Mass will also be held at Immaculate Conception Church in Fort Smith at 7 p.m., Friday, April 26.