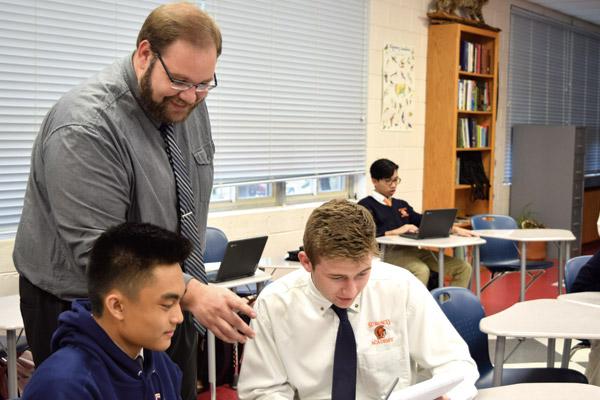 Five Catholic principals and teachers are about to become the first class of Arkansas graduates in Catholic school leadership master’s degree program.

The new partnership with St. Louis University is also expanding to allow professors to teach in Little Rock and to start a new doctoral program.

“I think it’s a wonderful program. I think it really prepares our principals to be good principals in a Catholic setting,” said Theresa Hall, superintendent of Catholic schools.

The virtual classes were available twice a month on Saturdays at the diocese’s House of Formation in Little Rock. After one more course in June, the educators who will earn their degree include Mary Kay Jones, principal at Blessed Sacrament School in Jonesboro; Rebecca Kaelin, principal at St. Boniface School in Fort Smith; Jared Schluterman, a science teacher at Subiaco Academy; and Sarah Wendel, a fourth-grade teacher at Christ the King School in Little Rock. Alice Stautzenberger, principal at St. Vincent de Paul School in Rogers, attended classes on the St. Louis campus.

The educators were able to use the video equipment already set up at the House of Formation, where seminarians have used the technology for seminary studies.

The educators attended virtual classes with others from the dioceses of Oklahoma City and Dallas cohorts.

Dr. John James, program administrator at SLU, said instructors would travel to Dallas to teach because “our faith is incarnational,” adding that because Jesus “came to us in the flesh,” it’s imperative professors make that human connection.

“I think it’d be egregious to do a program and never have a physical presence with the students. That is a hallmark of our program … it’d be counter to our theology,” he said.

The 33-hour program began in the fall of 2017 and included 11 three-hour courses. As a further incentive, the classes were offered at a discount, about $1,200 per three-hour course, $13,500 total for the program.

“They start with the mission of the Catholic school and where Catholic schools started, so you learn the whole history of Catholic education even before you get started in really taking the classes,” Hall said.

While Jones admitted balancing principal duties, homework, projects and travel time has been a challenge, the program has made a difference.
“I feel I am much more confident after these past two years. I feel very good about the ministry of being a principal, because it is a ministry, not a job,” she said.

All Catholic school principals are required to have a master’s degree in educational leadership or Catholic leadership. Jones holds a bachelor’s degree in business administration. While still praying about applying for principal in 2017, she realized the master’s program was through SLU, her alma mater.

“So when I learned that I said, ‘Well that’s the Holy Spirit telling me I should go ahead and apply for this position.’ So my education has come full circle,” she said.

Jared Schluterman, who teaches AP statistics, world religions and biology courses at Subiaco Academy, is in his fifth year teaching. He earned a bachelor’s degree in fisheries and wildlife biology at Arkansas Tech University in Russellville. He said he’s grown in communication with his students, getting them more involved in the subject matter and offering constructive feedback.

“One big thing is it allows for me to understand the administration how they think and the reasoning behind things,” Schluterman said. “… Before I was just in my classroom, I would get an email, ‘OK, do what he asks,’” without delving into the reason behind changes.

Jones added, “It’s worth it … the benefits you receive personally, not just professionally, that’s what it’s all about; To be able to grow and deepen your own relationship with Christ in this program, which I have.”

While Schluterman had to drive 2½ hours from Fort Smith to Little Rock, being a part of the class virtually instead of strictly online was beneficial.

“This was a nice way to bridge the gap be able to interact with them regularly and see them face to face instead of all through emails,” he said.

Hall said in January, SLU professors were approved through the state Department of Education to come to Little Rock to teach. When the next cohort begins, a professor now could be in Little Rock and teach virtually to students in Missouri, Oklahoma or Texas.

It’s the first year the Diocese of Little Rock has worked with SLU. Previously, master’s degrees were offered through the University of Dallas, but that program is no longer available. SLU is in the process of registering more educators for a master’s and doctoral programs in the fall.