Musical a farewell tribute to chapel and drama adviser 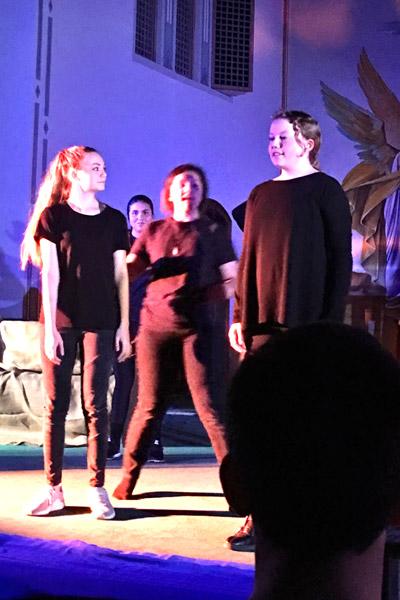 The young actors played out Jesus’ baptism and parables, such as the widow and the judge, the unforgiving servant, the Good Samaritan and the prodigal son, combining humor with Gospel teachings, to an enthusiastic audience of family, friends and Benedictine sisters. During the passion and death of Jesus, the stage was bathed in light, first blue, then red, and the chapel became somber.

“Godspell Jr.,” would be the last time the former chapel would ever be used, ending 90 years of daily Mass and liturgy of the hours, hundreds of religious professions and funerals. The sisters moved into their new monastery earlier this year but haven’t announced their plans for their six-story former building.

After the resurrection and the final anthem, “Long Live God,” the somber mood lifted. The sisters now have a new monastery where daily Mass and prayer continue.

For drama teacher Jo Elsken, who directed Trinity’s drama club for five years after her retirement from Southside High School, the show was a loving farewell to a 50-year career. “I’m kind of emotionally checking out. When I left Southside I cried uncontrollably for the whole time. I am working to where I will be happy. It is a rough thing. I defined myself as a teacher, and when you leave it was like ‘Who am I?’”

“Bryson likes music and is really energizing the singers, and he and Claire connect well with the kids,” Elsken said.

In a touching tribute to Elsken, Porter recognized her 50 years of teaching and thanked her for all he had learned from her. He said he and Hollenbeck “would love to help out and do ‘Godspell Jr.’ next year.” He hoped that Elsken would come at least once a week to provide her advice and support.

The young cast of seventh graders and two ninth graders was feted at a post-production reception hosted by their parents.

“This show was fun for the kids, and this being ridiculous and funny; they connected with it. Oved (Esperanza) was supposed to be a pig, and he grabbed a Razorback hat and got down on the floor,” Elsken said. “It was commedia-style acting. I hope if Trinity does it again next year all the actors should represent apostles and do research on their characters.”

Marsh, who coached the actors in ensemble and solo singing, said, “Working with these amazing students has been a fabulous experience. Their energy, creativity and willingness to give anything a try, theater-wise, are remarkable.”

“The very best thing about our drama club is that it gives some kids who may really find their talents lie in that area a place to perform, belong and shine and Ms. Elsken is so wonderful about pulling those talents out of kids who maybe didn’t know they had that expertise,” Hollenbeck said. “She can find them a role, a job to do and she’s just so good and such a blessing to us.”

A Catholic you want to know: Manuel Ordoñez

At milestone win, coach looks back on Catholic school time