Parson Simmons diving into sport few know much about 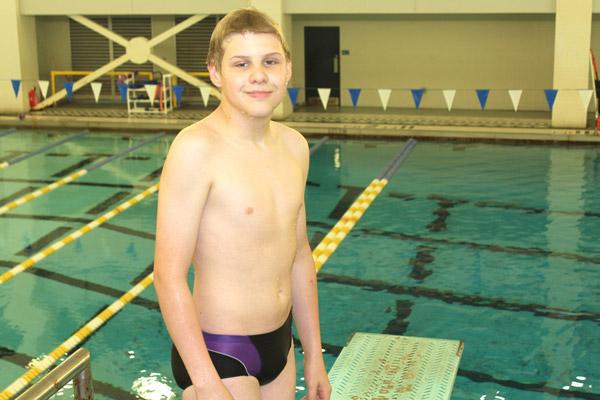 Dwain Hebda
Parson Simmons, 13, takes the high board during a recent practice in Little Rock. The eighth-grader has been diving competitively for five years and has plans to represent Catholic High starting next season.

Dwain Hebda
Parson Simmons, 13, takes the high board during a recent practice in Little Rock. The eighth-grader has been diving competitively for five years and has plans to represent Catholic High starting next season.

Kellye Simmons remembers being more than a little skeptical the first time her son Parson showed an interest in diving.

Kellye trained the camera on Parson striding onto the diving board of the family’s backyard pool, attempting a twist that landed him smack on his back. It was not the kind of debut that inspired visions of greatness, she recalls, but what happened next did.

“I said, ‘Hey, buddy. Was that the plan?’ He said, ‘No. That’s not what I meant to do, but I can do this. You’re going to want to record it now,’” she remembers. “So, I pulled out my camera and he did a full twist and a full flip when he was 8 years old. I thought ‘Golly, maybe this is something.’”

Five years into his competitive diving career, Parson has an armload of diving medals and big dreams about the future even though he has yet to clear eighth grade. In the soupy humidity of the aquatics center at UA Little Rock, he’s here with a handful of other middle schoolers executing practice dive after practice dive. Everything about him is unperturbed, flinging himself effortlessly off the platform into thin air and coming back smiling.

“I’m a huge daredevil. I have been for basically my whole life,” Parson said nonchalantly. “I was 10 or 11 the first time I went off the 10-meter board, which is about 30 feet.”

“I compete as a novice on one-meter and three-meter (board heights). It has some pretty difficult dives.”

Parson hones his natural ability by relentlessly training. His practice regimen is 90 minutes each, after school three days a week, plus additional training to strengthen and improve flexibility.

“It’s five hours a week on the board during the school year, but he also has an extra hour and a half of dry land training time,” Kellye said. “It’s building strength and flexibility; just looking at some of the things that they have to do, they have to have incredible flexibility. Yoga is a big part of it.”

The time spent has paid off for the youngster, who attends Christ the King School in Little Rock. To date he’s won a dozen golds, seven silvers and a bronze in diving competition, even though he winces at the memory of his first meet.

“Oh, I did terribly,” he said. “I got gold in both of (my events) because I wasn’t competing with anyone else in my age group, but my scores were terrible.”

Nevertheless, the hook was set with that first meet and he’s competed in six to eight contests per season since. Competition takes a measure of commitment similar to training; not only is the season long, but in order to dive for his club team, the Arkansas Eagle Rays, Parson and his family pack up and head west to Texas where the sport enjoys much higher participation than in Arkansas.

“All of my dive meets are in Texas. There’s meets all over Texas. Some of my favorites are in Corpus Christi and at SMU,” he said. “There’s none here in Arkansas.”

Given this fact, it’s no surprise that Parson’s success has gone largely unnoticed by his peers. In fact, until a local magazine did a piece on him recently few of his classmates even knew of his chosen sport, let alone that he won so much. This fact hasn’t fazed him though; he’s looking forward to diving for Little Rock Catholic High School next year and even bigger things after that.

“I plan to do it through college,” he said. “I want to be in the Olympics one day for diving.”

Parson has other reasons for competing for Catholic, even though it’s likely he’ll be the sole member of the diving team. His brother Jackson, who’s a junior and a member of the Rockets lacrosse team, provides ample motivation.

“I’m really competitive with Jackson,” he said. “I always try and outdo him but most times, it doesn’t really work.”

That may be, but watching practice it’s immediately clear the pool is Parson’s turf. Sailing through the air, he effortlessly bends and corkscrews before slicing into the water like a blonde javelin, leaving only a gurgling pile of bubbles to mark his point of entry. It’s the ultimate leveling agent over his taller, burlier brother or anyone else who climbs the ladder to contest him for that matter.

“It’s a special thing that (Parson) has that none of the rest of us have,” Kellye said. “My other son is 6’2” and 210 pounds; he’s a big lacrosse player. We joke that he’d look like a big giraffe out there on the board.”

“Parson is small and he’s struggled with being small for a while. But when he learned that this is what God made him to do and this is why he’s made the way he is and the shape he is, he loves it. He’s thrilled about it.”