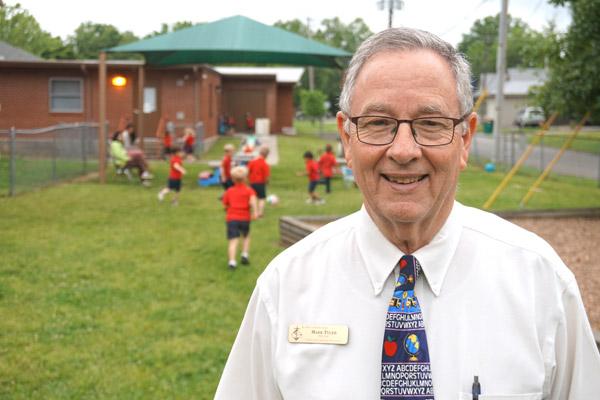 Aprille Hanson
Mark Tyler smiles on the playground at St. John School in Russellville May 8. He is retiring after nine years as principal at the school and 42 years overall as an educator.

Aprille Hanson
Mark Tyler smiles on the playground at St. John School in Russellville May 8. He is retiring after nine years as principal at the school and 42 years overall as an educator.

RUSSELLVILLE — At 7:45 a.m., principal Mark Tyler is ready to welcome the students and teachers starting their day at St. John School in Russellville.

“I personally greet everybody that comes through that door when they come out in the morning. I’m out in the car line talking to parents. I’m out on the playground at recess time … I think it’s important that they see you there and that you care about what’s going on in the classroom. You care about the learning and you care about the teachers teaching. That’s part of the art” of teaching, he said with a southern drawl, a kind smile across his face.

Tyler, 65, a parishioner at Sacred Heart Church in Morrilton, will retire in June after spending 42 years as a teacher, principal, superintendent in the public and private schools, the last nine at St. John School.

“Let me quote the country singer Kenny Rogers, ‘You’ve got to know when to hold ‘em and know when to fold ‘em.’ All we’ve got to leave behind is our, you hate to say this, but our legacy or whatever. You want to leave well thought of and kind of at the top of your game still. And when you get older, you start slipping a little bit, so I want to go out on a high note,” he said. “Sports is full of examples of people that stayed to long — Brett Farve, Muhammad Ali, just tons of them. Joe Namath. They stayed a little too long and didn’t retire at the right time. And I thought this was probably the right time.”

“Deep down they really want to learn. If you can figure that out and figure out how to reach them and bring them to where you want them to be, I think I’ve done something.” Mark Tyler, retiring principal of St. John School in Russellville

Tyler’s first taste of education was Catholic, attending all 12 years at St. Joseph School in Conway. In college he earned a bachelor’s degree in education with an emphasis in social studies and English, a master’s degree in history and later a doctorate in school administration.

“With history, you could do law school, you could be an archivist at a museum or you could teach. And teaching seemed like the most practical thing to do. But I developed the love for children,” Tyler said.

At 23 years old, he walked into his first classroom at Sacred Heart School in Morrilton.

“In those days, you had no internship. You were a finished product … You got your grade book, your plan book and you went to work,” Tyler said.

He taught in public and private Catholic schools, typically seventh through 12th grade.

“Deep down they really want to learn. If you can figure that out and figure out how to reach them and bring them to where you want them to be, I think I’ve done something,” he said.

Camping out at school

In 1984, he became principal at St. Joseph School in Conway for two years. Tyler spent the rest of his career primarily as a public school principal in Morrilton, Bigelow, Winthrop (Little River County) and Mineral Springs (Howard County), including four as a superintendent for East End Schools in Bigelow.

“You get to work with a variety of kids. I like working with all the other teachers sharing what I know and if there’s any way I can help, I love to help. I just think leadership is an important thing,” he said. “… To tell the truth too, I had a wife and four kids and I had to make some money. And administration was where it’s at. But I loved it.”

Tyler and his wife Sharon, who are the parents of Father Jason Tyler of Fayetteville, have a home in Morrilton, but he’d make the roughly 180-mile one way trip to Mineral Springs on Sundays, living in a camper in the bus pen during the week to serve as principal in 2007.

“I lived in a gated community because there was a gate on the bus pen,” Tyler laughed. “I thought about submitting it to the redneck yard of the month on the Jeff Foxworthy show.”

When his wife got a job as a secretary with the school district, they lived in a doublewide trailer for two years, going back to Morrilton on the weekends.

“South Arkansas is probably 70 percent at-risk children … We spent our time working to pull everybody up to the basic level,” he said.

“The support of the people, the family atmosphere,” sets the school apart, he said. “There’s not a high maintenance teacher in that group here, and they’re really dedicated to the kids.”

Tyler’s leadership and ability to champion his school have made a lasting impact. Enrollment was 62 in 2010 when he arrived, rising to 88 the next year. Today it’s 96, with 103 enrolled for next year.

“When Mr. Tyler came, it really gave our school stability. We had been kind of floundering for a few years, so Mr. Tyler came and really gave us a good foundation so that we could grow,” said fifth grade teacher Terri Kobs. “We had two fifth graders and we went from zero to two to now here we are with 11.”

Father Jack Sidler, pastor at St. John Church in Russellville, said, “Mark is Mark and everything about him points to his faith in God … in making sure the children are taken care of spiritually,” he said. “… He’s just very consistent in his faith. When his wife got sick, he’d say ‘It’ll work out, it’ll be OK.’”

In January, Tyler’s wife was diagnosed with breast cancer and underwent a double mastectomy in March.

“She’s a big part of my school life, a big supporter … she’s my hero,” Tyler said.

Tyler said he’s leaving the school “in good hands” with principal Vivian Fox, a parishioner at St. John Church, who in the past served as principal of St. Joseph School in Paris.

“Did I tell you what I’m going to do? I’m going to be a substitute teacher,” he said for St. John’s and other area public and Catholic schools.

Though he likes to work, it always comes back to the children who touch his life.

“When they come up and give you a hug, it lifts you up this high, promise,” he said, raising his hand. “Intangibles.”

Be vulnerable, do not hide emotions in prayer

COVID-19 is a chance to get closer to God