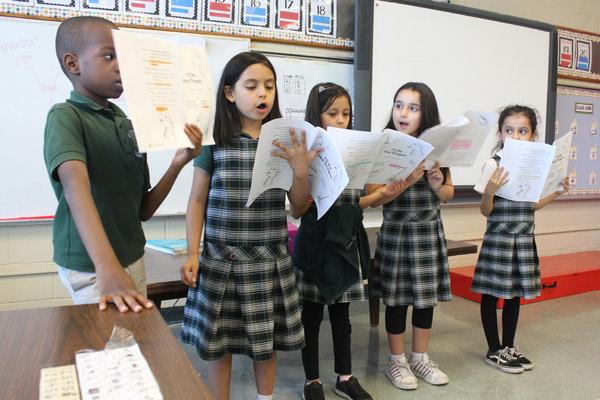 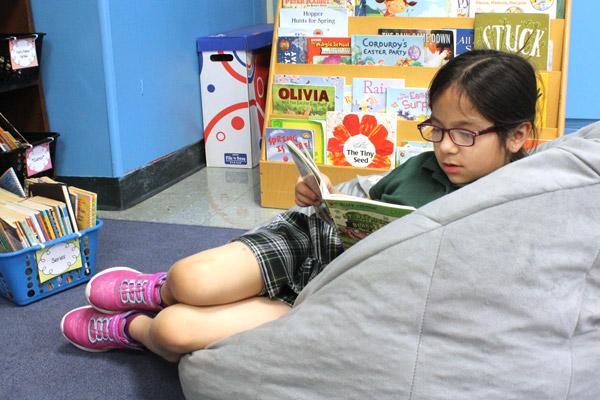 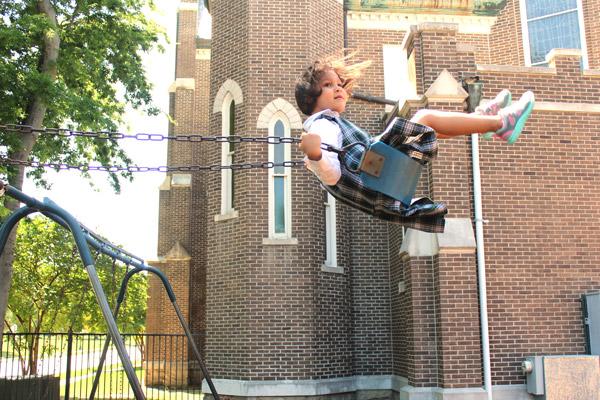 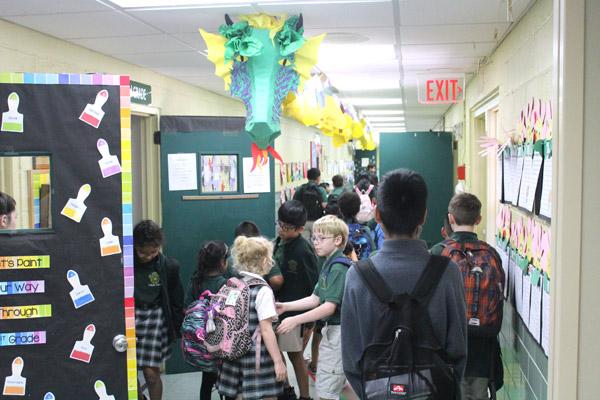 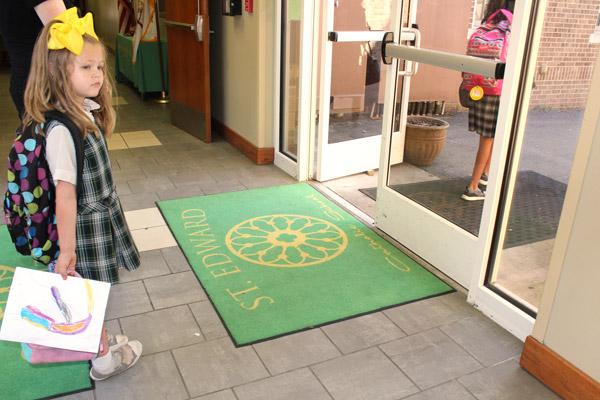 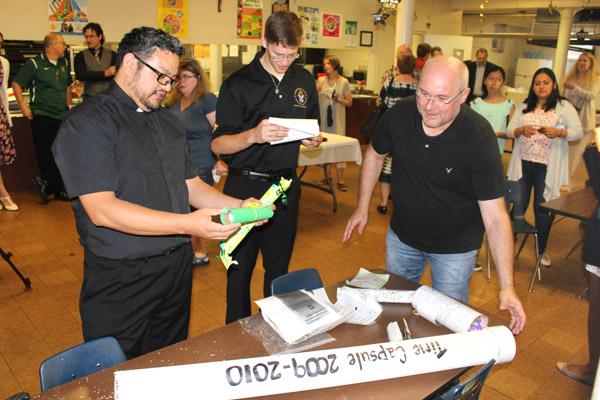 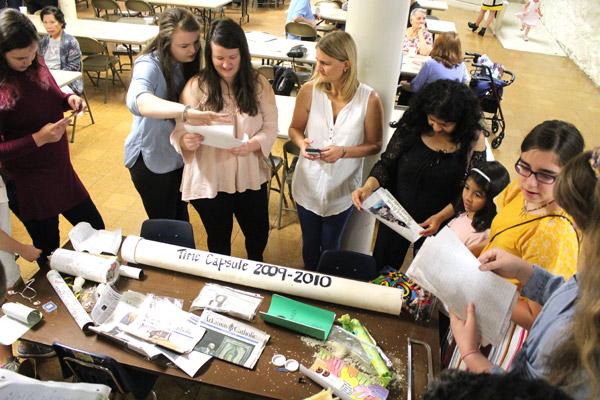 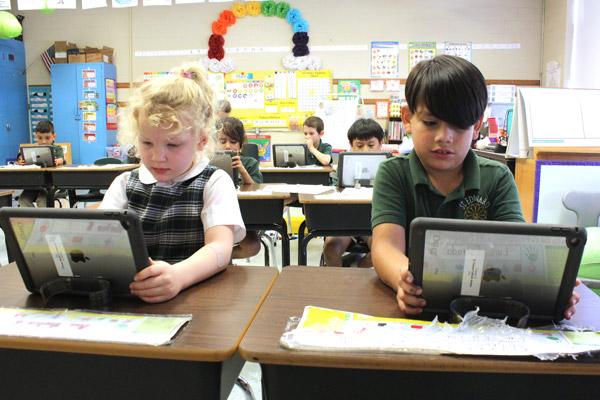 The green construction paper dragon hanging from the ceiling stares a hole through the school hallway. The artist granted the beast no expression, neither mournful nor rejoicing, merely watching what is and awaiting what is to be. To the faux reptile’s right and left, sturdy classrooms of eight to 10 students each witness over here a recitation, over there free reading time, down the way counting and numbers.

Summer has nearly overtaken the school year and yet the hallway and bulletin boards are still jammed with artwork and assignments proudly displayed and roundly praised. It won’t hang here forever, of course; these halcyon days have a way of melting into puddles of time and memory. Soon the trappings and trophies of the year will be carried home by their young creators and these halls will be silent and still.

Which is probably why the staff of Little Rock’s St. Edward School is leaving them up as long as they are. To take them down only hastens what they know is coming: The end of the year and the end of the line, one and the same for the little school in the heart of the city.

In February pastor Father Juan Manjarrez announced that the pre-K through eighth grade school would close this month after 134 years serving Little Rock families. The school’s financial shortfalls could not be overcome by additional fundraising and staff cutbacks.

“What I want people to know is that every student that has gone here has done wonderful things,” said Katie Nunley, sixth-year middle school language arts teacher who graduated from St. Edward School in 2001. “Even though we won’t be here next year it’s not like we’re not all going to be part of the same family, because it is a family. A lot of other schools, they don’t have the closeness that we do and I think that’s what makes us so special.”

There’s more to say but Nunley’s emotions won’t let her and that’s not particularly unusual these days. Around here people cry a lot, especially as the grains of the year slip faster from one globe of the hourglass to another. Amanda Bridges, Nunley’s classmate and one of two teachers who stepped into leadership roles in this final, difficult year doesn’t even try to hold it back, she just lets loose when things get too much.

“In the beginning, as a school, we were very united in trying to fight to keep the school alive,” she said. “It’s been really great to work with coworkers that have stuck through all the crazy. I think when we found out it was closing it’s just been a sad end of the school year. I think a lot of us were in denial, and it’s hitting us now the last couple weeks of school.”

St. Edward School has been running side by side with St. Edward Church since the downtown parish was founded in 1885 and is the longest operating elementary or middle school in the city. The Benedictine sisters ran things for more than a century before Vernell Bowen became its first lay principal in 1992.

“When I first came here, Father Jon McDougal had taken over from Father Scott Friend,” Bowen remembered following the May 19 Alumni Mass. “I asked him one time, ‘Father, is this school just going to become a private school because we’re 55 percent Catholic?’ He said, ‘No, don’t worry about that. We’re here to evangelize.’ That always stuck in my mind about Catholic schools and evangelization.”

The school was always known to cater to minority and low-income families, making it among the most diverse in the diocese. But the financial side that ultimately did it in was never the school’s calling card. Instead, St. Edward School prided itself on its underdog image and its seemingly bottomless well of compassion and expertise in the field of education. It was one of the first, after all, to offer services to children with special needs and no one who knows the culture is the least bit surprised. When you’re a family, you simply take care of the ones who need it most.

“It is just the most amazing place. I don’t want anybody to forget that,” Nunley said. “It wasn’t anything that we expected — to not be here — but at the same time, it is how it’s supposed to be and this is all part of God’s plan, whatever that plan is.”

Bridges and Sarah Richards leveraged the school’s reputation to the hilt in their role as lead teachers. Starting the school year, they lacked several key positions including a principal, but the staff that was there wasn’t about to let that affect the quality of instruction.

“With all of the struggles that we’ve had at the end of last year when they said it’s potentially closing, every single teacher here has stepped up, has done everything that they can,” said Richards, a second-year teacher. “I’m so surprised how positive we’ve all been. It’s just crazy how much they really do love the school and the kids. I think the main thing was, we knew we had to do this for the kids; even if we struggle, we don’t let it show.”

Congregants attending the May 19 Alumni Mass didn’t have any problem letting their emotions show, demonstrating the depth of love seemingly everyone felt for the place. Some, like Alison Jones of Little Rock, could list three generations of her family graduating here; others, like Sarah Wankum of Little Rock, were first-generation Dragon parents. Both openly wept talking about the impact of the school on their families.

“I don’t think we’ll ever have anything like it again,” said Jones, whose daughter Aubrey attends third grade. “It’s just a very loving, diverse group of kids that we had and it meant a lot to us.”

“One of my favorite things about the school is that everyone knew everyone. Miss Martha Reed, the school secretary, greeted everyone by name every morning,” Wankum said. “We’ve been a part of this church and this community for a long time and it was to send our children here. We love the school, we love the church and the community. It was always where we wanted our children to go to school.”

The duality of faith tells us that while nothing of earth lasts forever, everything God gives stays with us for all time. So it is that even as the teachers, parents and students of St. Edward School mourn their school’s passing, none can ever erase the smudges of character and faith these walls rubbed off on them.

“I taught public school for three years and nobody knew who anybody was outside of their classroom,” Bridges said. “There was no sense of community. If you were having a bad day as a middle schooler the teachers in the hallway didn’t say hi to you, they didn’t know your name. Here it’s different; I can see somebody and say hi. I can go upstairs and fix a problem if I need to or just talk. I don’t know if I’ll ever get that back again. I don’t know if it’ll ever be like that anywhere else.”

Superintendent Theresa Hall, whose office oversaw the school during its final year, said of the 140 current students, at least 63 students are enrolled in area Catholic schools, including St. Theresa, Our Lady of the Holy Souls and Christ the King schools in Little Rock and Immaculate Heart of Mary, North Little Rock Catholic Academy and Immaculate Conception schools in North Little Rock. She said two of the teachers have confirmed that they will be working in Catholic schools this fall, but the other teachers do have jobs outside the Catholic school system or have job offers.