Proceeds will help pay for construction of new monastery 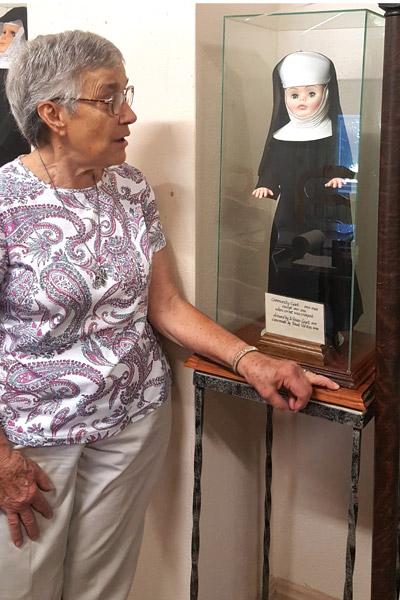 Maryanne Meyerriecks
Sister Madeline Bariola, OSB, talks about a doll wearing the same habit she wore when she made her first vows at St. Scholastica. The late Sister Vivian Luyet, OSB, sewed historical habits for a doll collection sold at auction.

Maryanne Meyerriecks
Sister Madeline Bariola, OSB, talks about a doll wearing the same habit she wore when she made her first vows at St. Scholastica. The late Sister Vivian Luyet, OSB, sewed historical habits for a doll collection sold at auction.

FORT SMITH — St. Scholastica Monastery’s auction May 16-18 began as all the Benedictine sisters’ activities do, with a prayer led by prioress Sister Maria DeAngeli.

“Lord Jesus, we ask the blessing on all of these people who are here together … that you will be praised and glorified, that our legacy will travel with them in the things that we have treasured, and that their day may be blessed as they have a great time on the grounds of St. Scholastica.”

Soon cars, trucks and trailers crept on to every square foot of ground surrounding the Fort Smith monastery, as eager shoppers rushed in to see six floors filled with antiques, books, shelves, furniture, religious articles, kitchen fixtures and art. Live auctions led by fast-talking auctioneers moved from room to room as groups of people gathered to make their best offers. By 10 a.m. on the second day of the sale, 2,039 shoppers had picked up auction cards to place their bids.

“I set up a little chapel with an altar in my home, and I would like a small church pew with a kneeler,” she said.

When she was told that the chapel items wouldn’t be auctioned until much later, she walked the halls to immerse herself in the history of the building that has been a landmark since 1924.

The Benedictine sisters first arrived in Arkansas on Jan. 23, 1879, building a convent and school in Shoal Creek. After 45 years, they moved to Fort Smith for better access to water, paved roads and health care. During the school year, most of the sisters were on mission, teaching in 62 schools in five states and operating 12 music schools and two orphanages. During the summer, more than 100 sisters would live dormitory style in the convent, growing fruits and vegetables and raising livestock.

In 2018, they sold the school building to their long-term tenant, Trinity Junior High School. Following Vatican II, fewer women entered religious life, leading the sisters to decide that a six-story convent was no longer suitable for their community.

In February, the sisters left the old monastery that had served them for 95 years and moved into a smaller, single-story monastery that allowed them to better use their personal and financial resources for their ministries of prayer, service and hospitality.

While the sisters brought their stained glass windows, the paintings by Sisters Roberta Hyland and Stanislaus Szczepaniak, OSB, a Celtic harp and a few other mementos to the new monastery, they realized that they needed to part with most of the things they had lived with for many years. As Benedictines, they were called to “listen with the ear of their hearts” and be open to change.

In the melee of the auction, the sisters, dressed in identical black T-shirts adorned with large Benedictine crosses, had little time for sentimentality as they operated concessions and guided shoppers to what they were looking for.

Sister Kimberly Prohaska, subprioress who will be taking over as interim administrator in June, summed up the community’s wishes for the auction.

“The auction has been incredible so far,” she said. “We are not sure exactly what all is going to play out towards the end, but we’re hoping for the best and we’re hoping that people will enjoy the treasures that they find here today and it will be a continued legacy of who we are as we continue to live our 140-year history in Arkansas.”

While the monastery did not share how much was raised, Sister Kimberly did say all funds will be used to pay for their new monastery construction.

And what will become of the old building?

“As for the future of the former monastery, we are in discussion about it at this time,” she said.