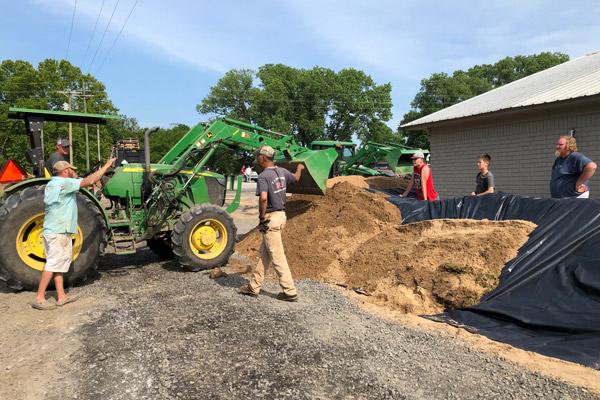 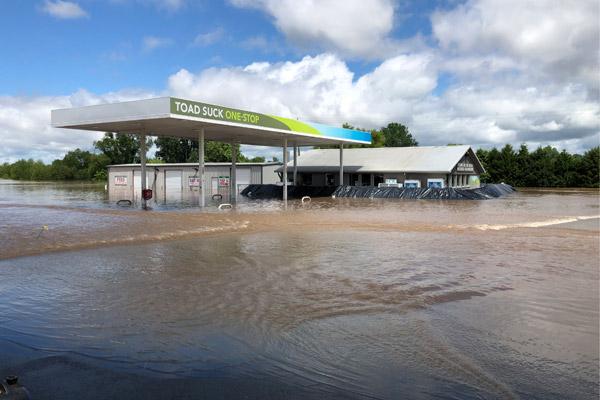 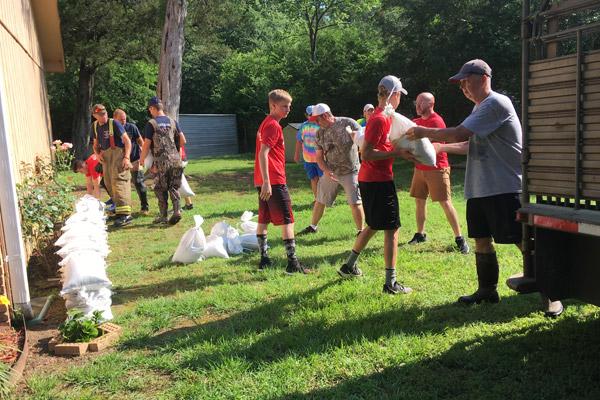 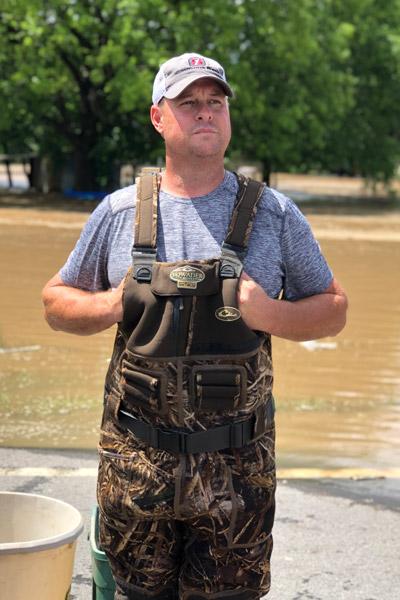 Courtesy Christy Trantina
Jason Trantina watches May 30 as rising water from the Arkansas River breaches the barrier that he and his wife, family and friends built to try to save their family business, the Toad Suck One-Stop on Highway 60 in Perry County west of Conway. Though it was a sad moment, Trantina said, “it was one relief that that struggle was over and fight was over.”

Courtesy Christy Trantina
Jason Trantina watches May 30 as rising water from the Arkansas River breaches the barrier that he and his wife, family and friends built to try to save their family business, the Toad Suck One-Stop on Highway 60 in Perry County west of Conway. Though it was a sad moment, Trantina said, “it was one relief that that struggle was over and fight was over.”

Catholic Charities of Arkansas is working on long-term case management for flood victims, one of the five focus areas for humanitarian association Arkansas VOAD, Arkansas Voluntary Organizations Active in Disaster.

Tracey Eichenberger Evans, who formerly served as the disaster preparedness and response coordinator for CCA, is a lead volunteer in case management for flood victims.

While there is not a separate CCA fund for flood relief as of June 10, Gallaher said any donations marked “flood relief” will be used for recovery efforts. Donations can be mailed to P.O. Box 7239, Little Rock, AR 72217-7239.

CONWAY — As currents from the Arkansas River began sweeping away the layers of sand and plastic sheeting built up around concrete barriers of the Toad Suck One-Stop, hopes of saving the community’s beloved store washed away.

This was Thursday, May 30 after days of owners Jason and Christy Trantina along with friends, family and some fellow parishioners at St. Joseph Church in Conway removing inventory, building a barrier and battling the rain all night with a water pump.

But as the sun was shining about noon, the Trantinas felt God had answered their prayers of knowing “when to stop fighting for our own safety,” Christy said.

“It’s very hard. We were sick, sick to our stomachs. We were so sad, we are grieving, we are devastated. At that moment you just feel so defeated,” Christy, 49, said. “But at the same time, our faith is what we lean on, and at the same time, thank God my husband and son are safe from these river waters. ‘We’re just going to let go and let you handle this.’ We’re so thankful we do have faith to hang on to.”

The store is one of several businesses and homes that have been damaged or destroyed during historic flooding along the Arkansas River.

Catholics in several Arkansas cities have been affected, including Toad Suck, Greenbrier, Dardanelle, Little Rock and Pine Bluff, and more communities in the coming weeks will undoubtedly join the list.

More than a store

In the rural community of Perry County with about 50 to 75 families, Toad Suck One-Stop is more than a gas station and convenience store, which the Trantinas have owned since 2006 and Jason has managed since 1997. In white lettering on the building, products and services are listed: “Groceries. Deli. ATM. Souvenirs. Bait & Tackle. Hay & Wheat Straw.”

It’s also a gathering place for breakfast and lunch where the locals learn about the goings-on in their small community. When the Trantinas announced on Facebook the store had flooded, it generated more than 4,200 reactions and shares, along with 1,000 comments as of June 6, including one user who said, “TSOS isn’t just a store, it’s a community. I have been stopping there every morning for the last seven years. Everyone is behind this store and together we will all bring this place back.”

“It’s our second home … they are more like friends and family than customers. I see these customers a lot more than I see some of my own family,” Jason, 45, said.

It’s a livelihood for Jason Trantina, who wakes up every morning at 2:30 a.m. to prepare breakfast for customers from 3 a.m. to 4 a.m. when they open. There are seven employees including Jason, who is also president of the levee and watershed boards.

“They rely on him, they trust him; he is such a hardworking, honest man. They call to ask if the bridge is icy” and to check on the river conditions, Christy said. “We are that community resource.”

For Christy, the adult faith formation director at St. Joseph Church, they are blessed that their family, home and cattle are safe, despite the losses of their business and farmland.

“We have never felt so loved by our church community. We began getting so many emails, phone calls, texts, social media messages we couldn’t respond to them all, there were too many. The outpouring of love and care for us in this time of need and grief,” Christy said. “… We do plan to rebuild, we’re praying about God’s plan for us. There is a fear this will happen again. At what point do we close up and do something else?”

Jason said tears have not been shed for the material things, but the love that’s been shown to his family.

“It’s hard not to cry even thinking about it. People care, but they really do care,” he said.

A native of Pine Bluff, Gail Bryant, 70, business manager at St. Joseph Church in Pine Bluff, said the water level is “the highest I have ever seen it in my life. I keep going down and watching, and it’s really sad.”

At least two families at their parish are displaced as water has flooded their homes, Bryant said. One who lives in the Island Harbor community, recently stopped in to buy memorial flowers offered by the parish for Father’s Day, in memory of his father.

“He’s trying to keep busy, trying to keep his mind off his property,” Bryant said, adding that neither family wanted to share their story at the time.

“I can’t imagine it,” Bryant said, whose home with husband Deacon Bud Bryant is safe. “When it goes down, you’re left with just nasty (water).”

The parish is a designated shelter through the Red Cross if needed, but they have not yet been asked.

About four years ago, Juanita and Bruce Noah, 73 and 77, parishioners at St. Joseph Church in Conway, moved from Benton to the Tanglewood Acres neighborhood of Greenbrier, in Faulkner County.

“Lost Creek is what overflowed from East Cadron Creek. It backed up all the way from the creek through our land and up through our backyard … If there wasn’t a ditch on the street, it would have gone over the street,” Juanita said. “We’ve probably got five feet of water in our backyard. Of course, it’s coming up on one side of the house really bad, on the other side not as bad.”

On June 1, they met “an angel in disguise,” while walking down the road, who within an hour sent members from New Life Church in Greenbrier and members of the Greenbrier Fire Department to create a sandbag barrier in their backyard.

Meanwhile, many families on the south end of Dardanelle (Yell County) evacuated. Julie Rutherford, 75, and her husband Olen, 76, only left for one night May 30 as they watched the river rise from their back door on the north end of town. Their home sits on a cul-da-sac on a sloped hill, but right by the river.

“The water was still rising, and it was getting into our sewer system so that was compromised. So then they announced they were closing the bridge from Dardanelle to Russellville … so we elected to get out of dodge for the night,” Julie said, adding they returned the next day when the water levels started to go down, but then came up again. June 5 was the “first night we could sleep in our room, which is on the back of the house toward the river. At night you would hear the waves crashing and carrying with it these huge logs and drift wood and slamming against the house. It sounded horrible. It was like the ocean, it was amazing, the waves.”

“The river is down, but what it’s left, it looks like desolation … It just took all of our dirt from the backyard so I’m just kind of on a sandbar,” but despite the damages, she added, “We’re really blessed that we’re back home.”

Catholic Charities of Arkansas is working on long-term case management for flood victims, one of the five focus areas for humanitarian association Arkansas VOAD, Arkansas Voluntary Organizations Active in Disaster.

Tracey Eichenberger Evans, who formerly served as the disaster preparedness and response coordinator for CCA, is a lead volunteer in case management for flood victims.

While there is not a separate CCA fund for flood relief as of June 10, Gallaher said any donations marked “flood relief” will be used for recovery efforts. Donations can be mailed to P.O. Box 7239, Little Rock, AR 72217-7239.