Vincentian priests say goodbye to the faithful in Arkansas 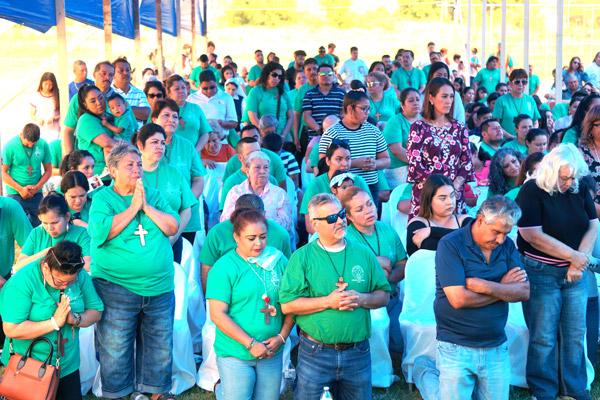 Malea Hargett
About 200 people, including many who wore their Vincentian lay missionary T-shirts and crosses, attended the May 26 outdoor Mass at the Vincentian Lay Mission Center in North Little Rock.

Malea Hargett
About 200 people, including many who wore their Vincentian lay missionary T-shirts and crosses, attended the May 26 outdoor Mass at the Vincentian Lay Mission Center in North Little Rock.

Plenty of tissues were needed May 26 during Mass at the Vincentian Lay Mission Center in North Little Rock. As temperatures were rising under the makeshift tent on the grounds of the center, parishioners were wiping their brows and fanning themselves with their music sheets.

But they were also wiping their tears away as they said goodbye to the Vincentian priests who have been stationed at St. Anne Church.

The diocese announced in April that the last two remaining Vincentian priests were being reassigned to other dioceses in the world effective June 12. Pastor Father Toshio Sato, CM, who arrived in 2016, will be moving this month to Bolivia while associate pastor Father Luis Ariel Ramirez, CM, will be moving back to California after eight years in Arkansas.

In his final remarks, Father Sato said, “I was not planning on crying, but someone made me cry.”

The order first arrived in Arkansas in 1985 to work in six counties in south Arkansas, primarily in prison ministry and working with the poor. The three priests first assigned included the late Father Lou Franz, who was well known for working to abolish the death penalty and visiting prisons.

Father Perry Henry, who attended the May 26 Mass, was among the first Vincentians in the state. He was the pastor of now-closed St. Vincent de Paul Church in Stamps (Lafayette County).

“When we came we found a place that was rich with so many gifts,” he said. “I spent nine years here and it was a blessing for me to be here.”

Father Tom Stehlik, who also attended the Mass, played his accordion during his remarks at the end of Mass. He is now serving as a pastor in New Orleans.

“We learned to go out. To leave the church grounds and to go out and learn new ways to reach out to people,” Father Stehlik said of the early days in Arkansas. “It was a time of creativity.”

When the Vincentians, including a deacon, were assigned to Little Rock/North Little Rock in 2000, they were first operating a Vincentian Evangelization Team, primarily working again in Hispanic ministry and training lay ministers.

In 2004 they were permanently assigned to serve St. Anne Church, and over the past 15 years they also assisted at parishes in Arkadelphia, Batesville, Benton, Glenwood, Hot Springs, Jacksonville and Searcy.

Guillermo Bruzatori, executive director of the Vincentian Lay Mission Center, said the center will still thrive even though the Vincentian priests will be gone.

“We are going to have a young father (Father Alejandro Puello) who is coming,” he said. “Of course, at this time we have two priests but then we are only going to have one. That is going to be very difficult with only one priest.”

Bruzatori said the Vincentian’s gifts were spending time outside the church walls with the parishioners.

While the Vincentian priests are leaving the state, the diocese still has a religious presence based on St. Vincent de Paul’s charism, including the Daughters of Charity and the St. Vincent de Paul Society in several parishes. Depaul USA operates Jericho Way, a homeless day resource center in Little Rock.

Vincentians have dedicated 400 years to serving the poor