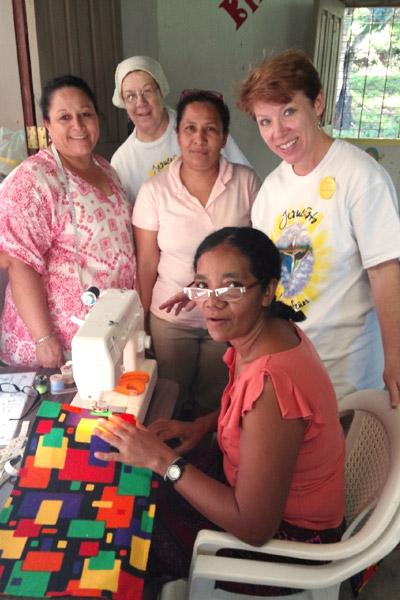 From 1996 to 2017, Christ the King Church in Little Rock was able to accomplish these goals:

• Equip two operating room suites at the Trujillo hospital, paint inside of hospital and install lights and fans.

Christ the King Church in Little Rock has taken on a new mission, building upon more than two decades of charitable work in Honduras to now benefit parishioners in Arkansas.

One Church, which was launched in September, is a program through Catholic Charities of Arkansas that chooses a struggling parish within the Diocese of Little Rock for all parishes to assist for 12 months to become a thriving faith community. This year, St. Luke Church in Warren was chosen. The church, of about 60 families, is raising money to renovate a former farmer’s co-op facility to replace their small, more than 100-year-old building that seats only 175, generally leaving standing room only for Masses. The CTK Mission Board has shifted its focus from the international mission in Honduras, which began in 1996, to One Church.

“If you were to take a picture, a photograph of the congregation in Warren and compare it to the congregation in Trujillo, it would be identical. These are the people that have (come) into Arkansas from Mexico, from central America and they are making our diocese, our state their new home,” said Msgr. Francis Malone, pastor of Christ the King Church. “And so we would be in essence serving the same people. Instead of us going there, they’ve come here and they’ve decided to live here, but they have some of the same needs.”

In February, Msgr. Malone and the Mission Board officially decided to end the mission in Honduras, which has gone almost every year to Trujillo since 1996, with two trips each year starting in 2010. Msgr. Malone said CTK gives both locally and nationally through collections, but Msgr. Gaston Hebert, who served the parish for 20 years, wanted to expand to an international mission in the ’90s.

The last mission trip organized by the parish was in June 2017. Trujillo is on the Caribbean coast and missionaries had to travel about six hours by bus from the closest airport on unsecured roads. Honduras is ranked one of the most dangerous countries in the world for its high murder rates and gang violence.

“It was a combination of two things. One, the important thing and it’s been our concern for years, the safety concern for our missionaries and the lack of assurance that our missionaries would be protected once they arrived at Honduras, especially in the past few years where there has been civil war and strikes within the country making Honduras on some international lists one of the most dangerous countries in Central America. We couldn’t ignore it. So safety was the primary reason,” Msgr. Malone said of the mission ending, adding that “additional issues about communication exasperated this situation … It was a very sad and troubling decision to make, but it was the only decision we could make.”

Throughout the years, the Honduras Mission has sent experts in the fields of medicine, construction and education to the country to operate temporary medical clinics, build schools and educate and evangelize teachers and students. The cathedral in Trujillo had 11 missions in the villages which CTK aided, as well as helping with Finca del Niño (Farm of the Child), a Catholic orphanage. Clinics were set up in three villages as well as the local hospital and 11 schools were supported, said Sandee Haslauer, who retired in 2018 after serving 14 years as mission director.

“There were nurses that came in that just took care of the little children without shoes who would come into these clinics with encrusted feet. They’d wash the mud off of them, they’d kill all the parasites and anoint their feet. They’d take care of the lice and all the hygienic stuff,” Msgr. Malone said. “… Some of the communities had no sanitation or fresh water and they worked with Rotary to ship pipes and to put in a radio station, all of this is over a period of 20 years. It’s hard to quantify all the mission did.”

More than 100 missionaries traveled each June and about 20 in January.

“It was just overwhelming how many hearts we touched. I’ll tell you every missionary that ever went there left there feeling like they got so much more than they gave … It was like going home,” she said.

Msgr. Malone added there are many parishes in Arkansas “doing really wonderful work in their own way,” in regard to overseas missions (see sidebar, this page).

CTK’s work with One Church will continue their missionary charism.

Betty Jo King, mission director for Christ the King, said the response to the change has been positive.

“It makes it more available to a wider group of our parishioners. When you think of Honduras the (fee to travel to Honduras) was $1,800, a week off from work you had to take, not everyone is healthy enough to travel to Honduras; It wasn’t available to a wide range of parishioners,” King said. “Our hope now is we’ll be able to have a variety of mission projects and at our various levels of mission work.”

The parish has already allocated $25,000 to St. Luke, has donated about a dozen tables and chairs and visited the parish June 13 to learn more about what the needs are.

“This is the promise and commitment I made to the parishioners when I made the announcement about Honduras. I said I commit to you we will continue our missionary charism, and we will continue to look for opportunities to help and we have this opportunity in our own backyard,” Msgr. Malone said.

From 1996 to 2017, Christ the King Church in Little Rock was able to accomplish these goals:

• Equip two operating room suites at the Trujillo hospital, paint inside of hospital and install lights and fans.