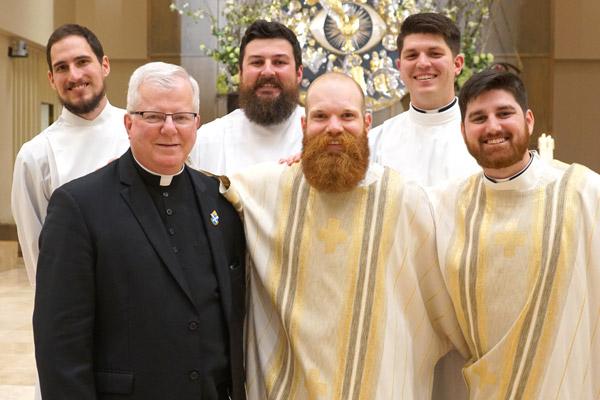 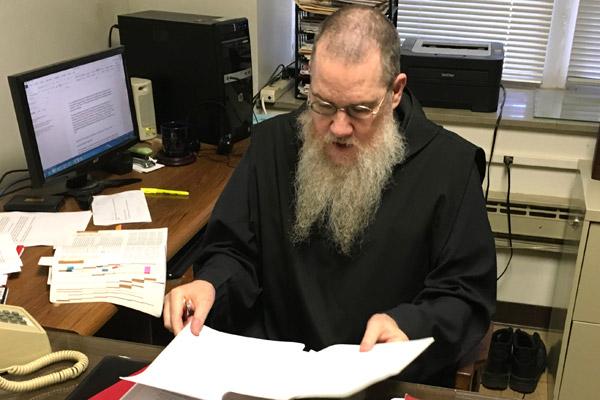 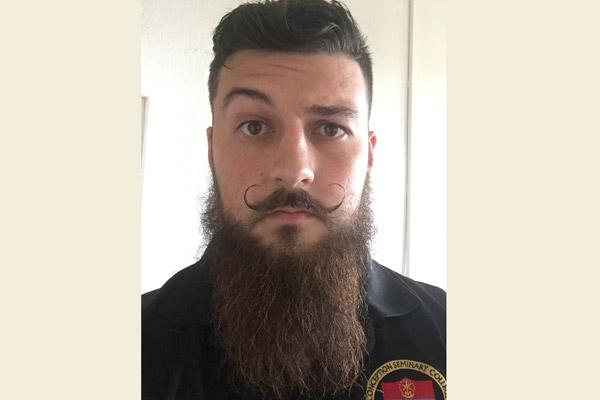 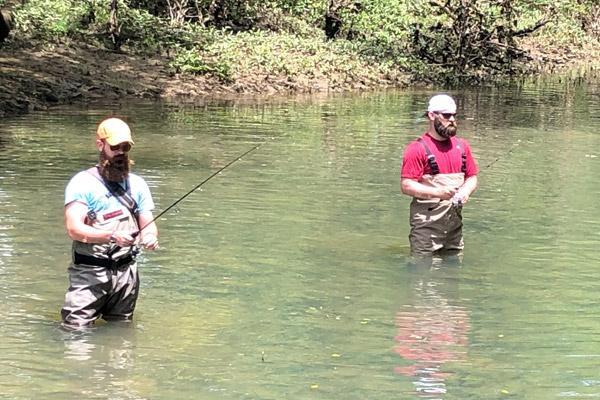 Why are priests sporting beards? Solidarity and competition

Whiskered clergy reflect tradition of the saints and brotherly bonds 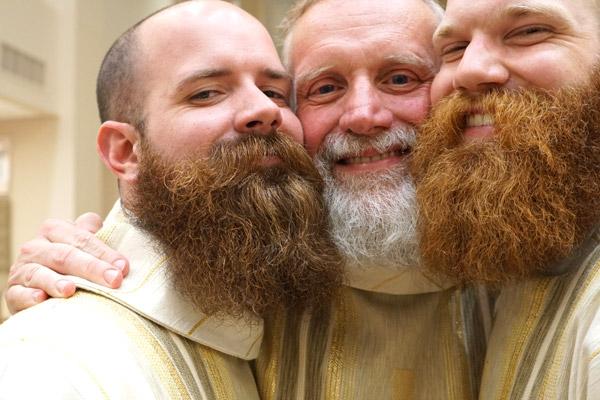 Malea Hargett
Growing a long beard has become a family affair for some of the Friends. While Msgr. Scott Friend (center) already had a short beard, he was inspired to grow it longer over the past year thanks to his nephews, Father Patrick Friend (left) and Deacon Joseph Friend.

Malea Hargett
Growing a long beard has become a family affair for some of the Friends. While Msgr. Scott Friend (center) already had a short beard, he was inspired to grow it longer over the past year thanks to his nephews, Father Patrick Friend (left) and Deacon Joseph Friend.

While heading to the Little Red River at Pangburn for a short fishing trip June 10, Fathers Patrick Friend and Jeff Hebert contemplated one of the more perplexing religious questions that has likely been on the minds of those they’ve encountered lately — their beards.

And not just the run-of-the-mill scruff, but more like Moses who just came down off of Mount Sinai.

The two tried to come up with a spiritual justification for their bushy chins, looking to the Church Fathers.

There was St. Augustine who said, “The beard signifies the courageous; the beard distinguishes the grown men, the earnest, the active, the vigorous. So that when we describe such, we say, he is a bearded man.”

St. Clement of Alexandria had a long spiel about the manliness of beards, saying in part that God “has adorned man, like the lions, with a beard, and endowed him, as an attribute of manhood, with a shaggy chest — a sign of strength and rule.”

“That is my reason for having a beard. I want to be like a freaking lion,” Father Friend said, adding “All that being said, we just totally are not shaving.”

The priests, who were ordained in 2018, grew their beards out throughout seminary as a competition, generally shaving in the spring. After their ordination, they decided to keep it.

“Patrick grew his out first and I wanted to beat him. It was a beard-off,” Father Hebert said.

Priests, monks and seminarians around the state have been sporting some facial hair for reasons that vary from competition to solidarity.

According to an article posted on EWTN.com by Father Edward McNamara, a professor of liturgy and dean of theology at the Regina Apostolorum University, there is no canon law prohibiting beards.

Seminarian Brian Cundall — “the O.G. of the beard game” Father Friend said — began growing his out after graduating in 2013 from Catholic High School in Little Rock. He’s had some form of facial hair ever since, from a short beard to one about a foot long.

“There’s that long history in the Church. You think of many of the great saints who had beards or some sort of facial hair. If you were a monk living in a monastery, you just didn’t shave; it was just a part of it,” Cundall, 24, adding that he’s kept his shorter as he serves in hospital ministry so patients can see his collar, but also because “it shows wisdom; when you’re as young as I am it’s been very helpful.”

Some bearded saints have unique or hair-raising stories, like St. Philip Neri, who shaved off only half of his beard while attending big events, for both his humor and to maintain humility, according to aleteia.org. Then there’s the legend of St. Wilgefortis, whose feast day is on Cundall’s birthday, July 20. According to folklore, St. Wilgefortis was beautiful, but did not want to be married, despite the insistence of her father.

“She prayed to God to preserve her virginity … and she grew a beard,” Cundall said. She was crucified as a result, according to Catholic.org.

For Cundall, St. Maximilian Kolbe’s beard while he was ministering in Japan is inspirational, as the culture associated beards with religious people.

“More often now little children will point at me and say, ‘Jesus?’ No, just a cheap imitation. … he’s like, ‘Then why do you have a beard?’” Father Hebert said.

Father Friend has a more scientific answer to it, “I just sneezed and it popped out; I shaved this morning. They nod, like it makes sense.”

Father Friend graduated from Catholic High in 2007, where he now teaches. It’s ironic because the school does not allow students to have facial hair.

“A boy comes in with a little bit of peach fuzz and I’ll say, ‘You have to shave that,’” with his giant beard likely moving along with the reprimand. “Buddy, when you get that diploma, you knock yourself out,” he added, admitting though, “The second Father Fred (Msgr. Lawrence Frederick, rector) asks me to, I’ll shave it. That is not the sword I want to die on.”

For the moment, Father Friend has an end goal for his mane, allowing a part of his head/face to be shaved if the incoming seniors can collect more cans than last year’s class for the food pantry, topping 113,000.

After Deacon Friend’s ordination May 22, Arkansas Catholic posted a photo of the three Friends with their beards pressed together (see page 1) on Facebook, which was shared 33 times as of June 11.

“All the apostles, Jesus, they all had good beards. In the Eastern Church, usually priests grow beards as a sign of holiness,” Msgr. Friend said. “I just felt like I should join the club.”

Brother Roch McClellan, a monk at Subiaco Abbey, has been growing his beard, which reaches down to his sternum, for the past seven years. Long, thin and Kung Fu movie-esque, Brother Roch said he’s one of few monks with a significant beard, but facial hair is rooted in the history of St. Benedict.

“As we walk into our refectory, we have pictures of all the previous monks that have gone before us. If you look at the early monks, they had pretty long beards too,” he said.

However, he’s learned that there are risks.

“When I was a novice I was lighting candles in the church and I ended up setting part of it on fire. It burned one side of it pretty well” around Christmas, he said, adding that brother monks and parishioners still talk about it. “All you can do is laugh.”

On June 9, Deacon Joseph Friend took 30 minutes or more to cut off most of his beard, leaving so much hair that it looked like a “decent sized rodent in the sink; it was pretty terrifying.”

Father Friend pointed out it was important to ask his younger brother, “How it feels to be ostracized by his brother and uncle because we don’t look at him anymore.” His uncle was more blunt: “He’s a traitor. You can quote me on that.”

“They are ordained priests, their job is to conform their life to Christ so I’ll ask if they can find some mercy in their hearts and accept me back. I’ll make it up to them,” Deacon Friend said, adding that a beard “speaks to the camaraderie of our priests now. Even doing something kind of trivial like growing a beard, it’s kind of fun. We’re … excited to be priests together, tapping into that brotherhood.”

Cundall said he sees the “resurrection of the beard” in today’s society and the Church as a way of ultimately imitating Christ.

“It kind of seems like it’s all getting back to basics. Even if someone is not necessarily Christian or spiritual, there’s something with a man in the woods with a beard ... the beard signifies courageous manhood in some ways … to rekindle and reclaim manhood,” he said.