Brooke Green rises from tragedy to dominate her sport 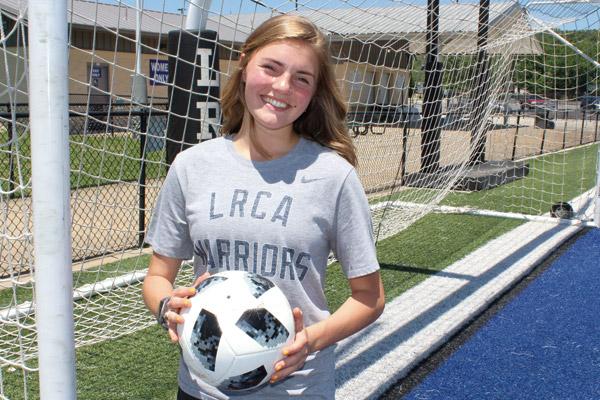 Dwain Hebda
Christ the King parishioner Brooke Green gets in some post-season work at her high school, Little Rock Christian Academy. Green led the school to back-to-back state titles in soccer and also runs cross country for the Warriors.

Dwain Hebda
Christ the King parishioner Brooke Green gets in some post-season work at her high school, Little Rock Christian Academy. Green led the school to back-to-back state titles in soccer and also runs cross country for the Warriors.

Though smaller than you’d imagine on first sight, Brooke Green speaks with a confidence that commands attention. There’s something in that voice, a full-rounded alto that squeezes out any hint of self-consciousness.

Strolling out onto the field at Little Rock Christian Academy where she’s a rising senior, her voice is familiar. Here is where she commands the action as a defensive midfielder, a field captain role that demands knowledge enough to direct teammates and courage enough to win every contested ball.

It’s the voice of a leader; someone who will play hurt and not think twice, who’ll yell a player back into position then pump her up during the break. Someone who’s seen the worst in life, things nothing in soccer can ever come close to, and is still here. It’s the voice of one with an angel on her shoulder.

“I feel (my dad’s) presence and think of him during certain things,” she said. “Like during games, I know my dad’s watching and it’s been really interesting to experience that. It’s a relief, you know?”

“You’ve got to lean into God and those around you ... That’s what really, really helped me.” Brooke Green

The 17-year-old can’t remember a game Rob Green ever missed, except one. And that was the first time she knew something was seriously wrong with her dad. When he failed to go to work the next day, the diagnosis that followed, Addison’s disease, was largely a formality.

Almost before the Green family knew it — Brooke, her mother Maria and younger sister Caroline — Rob was gone, two years ago January. Brooke, then 15, began living the strange, ill-fitting duality of being a rising star for the Warriors on the field and a knotted cord of grief off of it.

Brooke was always an active kid, but not everything her parents put her in suited her. A refugee from gymnastics and dance, her mother took her to her first micro soccer match where she promptly scored a couple of goals on opponents more interested in juice boxes than impeding a pint-sized freight train.

Throughout her years at Christ the King School in Little Rock, where she attended from first through eighth grade, time rolled from soccer to basketball to track and back again. She wasn’t particularly gifted, except in the effort department.

“I would say I’m just a really, really hard worker,” she said. “It’s been like that forever. In life in general I’m very independent and want to get things done. I’m not aggressive in everyday life, but willing to get things done, not letting things stop me.

“I’ve always been the smallest one on the court and field. So I kind of have to step up to everyone’s level.”

It’s a fair bet she never felt smaller than in the wake of her father’s death. But just as she always gravitated toward team sports for the camaraderie, so too did the help of others help her cope with her loss.

“It had to do with the community and the environment I was in at Little Rock Christian,” she said. “They’re very uplifting and encouraging. I could not have been in a better place at a better time.”

Her faith also stepped into the breach in a way that was intensely close and personal.

“It made me really vulnerable to rely on Christ and lean on him and ask him why and really dig deeper into my faith and understand why these things happen, why bad things happen to good people. I realized that suffering and immense grief like this doesn’t go unknown. God knows and he watches out for his people.”

Green came through the most difficult season of her life with 5A All Conference honors as a freshman, a feat she repeated again this year. In April, she was featured as the national MaxPreps Semper Fidelis Athlete of the Month, presented by the United States Marine Corps.

All that, plus the rare experience of back-to-back state soccer championships. This year’s title run was something of a laugher; at state, no team scored on the Warriors until the final match while they outscored opponents 23-1 over four games. And even though the team graduated a lot, Green is looking forward to chasing the three-peat.

She’s also gained a new appreciation for the people in her family, relationships honed by the grief they all went through, particularly her mom.

“Before it was like, you know, teenage mom and her daughter. They fight,” she said. “My dad was always the mediator. After he passed away it was like, she’s all I have. Me and my sister are all she has. I think it definitely caused us to draw closer and realize how special that relationship is.”

Green has applied to the U.S. Naval Academy and if that doesn’t work out, she’s eyeing the University of Alabama and its engineering program. She is also training this summer for cross country which she lettered in last year. As her final year of high school — and quite possibly of organized sports — approaches, she’s put what she’s learned about overcoming loss into perspective.

“What I would say is, take it day by day. I think that’s what helps the most is not looking at a year from now, but today, I’m going to do this,” she said. “I’m going to overcome this and then we’ll see what tomorrow brings. Don’t stress what hasn’t happened yet.”

“Also, you can’t do it by yourself. You’ve got to lean into God and those around you and really dive deep into your community and focus on relationships. That’s what really, really helped me.”