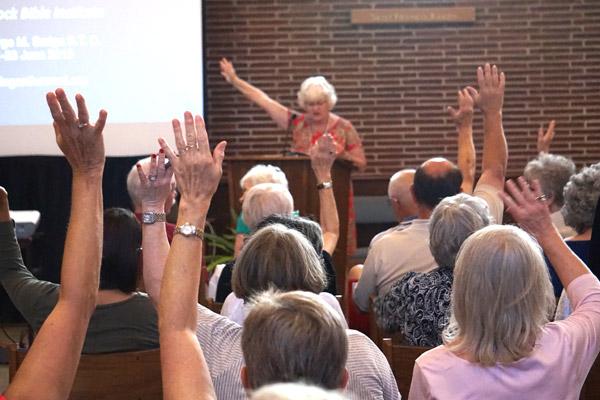 Participants who had attended Little Rock Scripture Study Bible Institute in previous years raise their hands during introductions June 21, led by retiring director Cackie Upchurch at St. John Center in Little Rock. There were 105 participants for the weekend institute held June 21-23. It followed the theme, “Surprise, Shock, and Gospel: Re-Interpreting the Parables of Jesus” and Father George Smiga, STD, was the keynote speaker. The institute has been held in Little Rock since 1990 and allows people throughout the country to hear renowned Catholic scholars speak on the Bible, along with presentations, small groups, prayer time and Mass.

With the sale of LRSS to Liturgical Press effective July 1, future plans for a Bible Institute in Little Rock are unknown.