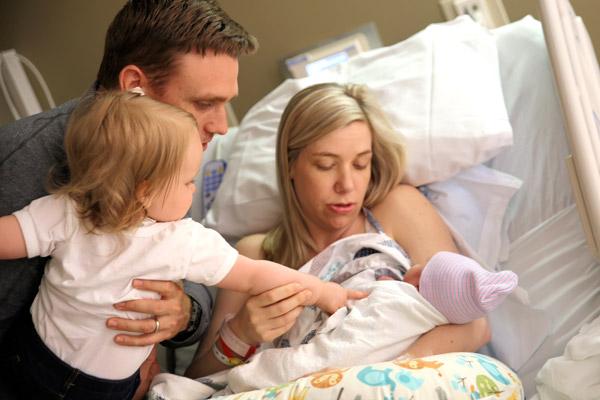 Courtesy Kathy Aday
Steve and Laura Aday introduce their daughter Brooklyn to her newborn brother Joseph April 12. For seven years, the couple struggled with infertility before being able to conceive Brooklyn, now 20 months. The couple is open about their struggles in hopes that more Catholics who face the same issue feel supported.

Courtesy Kathy Aday
Steve and Laura Aday introduce their daughter Brooklyn to her newborn brother Joseph April 12. For seven years, the couple struggled with infertility before being able to conceive Brooklyn, now 20 months. The couple is open about their struggles in hopes that more Catholics who face the same issue feel supported.

What couples can do?

Steve and Laura Aday are the first to admit their 20-month-old daughter Brooklyn is a pistol. Her joy radiates from her infectious smile, “just a lovable sweet little baby that just wants to go, go, go all the time,” her dad said. She admires her two-month-old brother Joseph, affectionately calling him “baby Joe.”

This beautiful foursome is something of a miracle. For seven years, the Adays struggled with infertility, something faced by 6 percent of married couples, according to Centers for Disease Control.

“With the Catholic Church, family is one of our biggest virtues and so important. Being a cradle Catholic, it’s engrained in you growing up. You see all these huge Catholic families like ours,” on both sides of their family, Laura Aday said.

But what is seldom discussed is infertility. It is defined by the CDC as not being able to conceive after at least a year of unprotected sex.

The Adays, parishioners at Our Lady of the Holy Souls Church, attended Catholic High School and Mount St. Mary Academy in Little Rock, respectively, following multiple generations of their family who had done the same.

“We’d known each other forever,” Steve said, before marrying on July 17, 2010. About a year after marrying, they tried to conceive a child.

“Each month went by and it wasn’t taking, it seemed,” said Steve, 36, adding that after six months, they grew concerned. “You’re taught growing up that getting pregnant is easy because no one ever talks about infertility.”

According to the National Women’s Health Resource Center, couples aged 29 to 33 with no health issues impeding reproduction have only a 20 to 25 percent chance of conceiving each month.

“After about a year or so we went to the doctor, ran the normal tests. Everything was fine. We had ‘unexplained infertility,’” he said.

Through the next seven years, Laura, 34, a CARTI social worker, underwent fertility treatments, including medications and shots. They stopped when faced with the option of IVF “because that’s clearly anti-doctrine and our faith,” Steve said (See sidebar, left).

The couple endured two miscarriages. Laura learned one in four pregnancies ends in miscarriage, which occurs before the 20th week of pregnancy. In a loss after 20 weeks, the baby is considered stillborn.

“It was encouraging to know it could happen on our own, but then hard because of the loss … it was at a time when you’re watching friend after friend announce their own pregnancies,” Laura said. “… We went through being frustrated, obviously angry and sad. Even though you have each other, it’s lonely because as much as we had each other, we deal with that differently.”

Steve said, “I think for me it was really easy to get judgmental. We’re good faithful people, we go to church, do our best, work hard, eat right, we’re not doing anything illegal … why does that person get a kid and not me?”

Even attending Mass on days when she felt particularly defeated was not always the respite it could have been, especially when a mother would sit in the pew in front of them, cuddling her cooing newborn.

“I can’t go anywhere without it being thrown in my face,” she said. Her husband added bluntly of infertility, “for lack of a better term, it sucks.”

But the couple turned to family rosaries and strengthened their prayer life as they waited.

“I remember Msgr. (Francis) Malone, when I met with him one time, I was telling him just how angry I was, he said, ‘Get mad at God; he can handle it.’ Just having just those moments when you’re on your knees crying, letting it all out, that’s when I found the most comfort.”

Friendship with the Friends

The Friend family, with brothers Father Patrick Friend and Deacon Joseph Friend, were a constant support. Patrick was a senior the first year Steve taught at Catholic High in 2006-2007, and he later taught Joseph. They became close with their parents, Dr. Jerry and the late Betty Friend.

“They walked with us throughout this whole experience,” Steve said.

Deacon Joseph Friend said “our bond really started when my mother was suffering from cancer. That was my junior year of high school back in 2011. They just really showed what love was in thick and thin and really walked with us through that whole battle. They were willing to walk in that suffering experience … as my mom suffered and died, it was one of her big prayers that they would be blessed with a child.”

Father Friend’s first baptism of someone he knew was their daughter Brooklyn. Their sister, Katherine Friend, is also her godmother. Three days after Deacon Joseph’s diaconate ordination last month, his first baptism was the couple’s son, Joseph, on May 25.

“It was very emotional to me; I teared up and was shaky, especially at the end of the baptism there’s the blessing of the mother and blessing of the father and realizing we had gone through that many years, to come through that moment to bless them not only as husband and wife, but as father and mother was one of the most impactful parts for me,” Deacon Joseph Friend said, adding that the child’s name is Joseph. “It was pretty cool to have that little guy for my rookie debut.”

Steve said they saw Betty Friend, who died from cancer in 2013, in all of it: “We said she was in heaven orchestrating the whole thing to ensure her kids would be able to do this.”

Despite facing seven years of hardship, the Adays are open about their struggles in hopes that others can find support.

“Really we found a lot of meaning in being able to talk about it with other people. We’re very open about what our struggle is,” Steve said. “It is tough because you do feel isolated because I probably only talked about it to five of my best friends, family.”

Laura found sharing her story on Facebook has been healing, including a post during National Infertility Awareness Week, April 21-29.

“I had friends comment, ‘I’m going through the same thing you are.’ Had there been something within the Church, that would have been great,” she said of a support group for those facing infertility.

An English and religion teacher at Catholic High School, Steve said he makes sure to share his story of infertility when discussing “the call to family.”

“I always try to explain to them it’s not just a motherly issue, what they will feel as far as being the man and caring for their spouse. With a guy, the tragedy is a mental, emotional thing. For the girl, it’s mental, emotional and physical,” he said.

The CDC stated that in 35 percent of couples that face infertility, male and female factors are identified and in 8 percent, only a male factor was identified as a cause.

Laura said aside from a Catholic support group, learning about it during marriage preparation along with Natural Family Planning would help couples. Elizabeth Reha, director of the Family Life Office at the Diocese of Little Rock said whether infertility is discussed depends on the couple.

“It’s a topic that is more prominent as couples are getting married later in life,” Reha said.

According U.S. Census Bureau data, the average age of marriage in 2018 was 27.8 for women and 29.8 for men, the oldest on record dating back to 1890. The CDC states that age is a leading factor, with one-third of couples in which the woman is older than 35 experience infertility.

Reha said she refers couples who are struggling with infertility to the St. Paul VI Institute to learn about NaProTechnology, used with the Creighton Model FertilityCare System of Natural Family Planning.

Laura Aday said looking back on her journey, she hopes the Church continues to look for opportunities to discuss and support couples who face infertility.

“It is something that needs to start being talked about,” she said, along with the “importance of family and welcoming children with open arms, but also not being able to have them and how to deal with that.”

What couples can do?

Doctors can offer many tactics to help childless couples