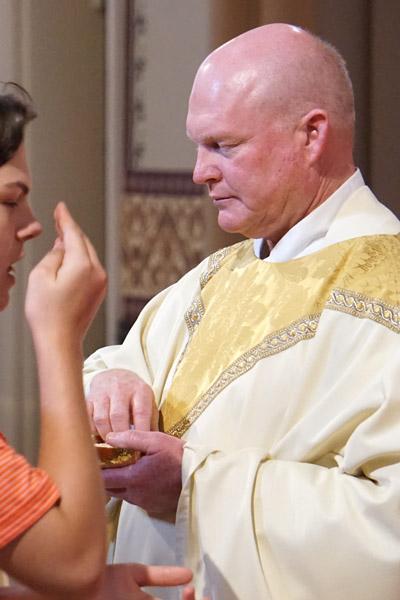 Aprille Hanson
Father Phillip Reaves gives Communion during the priest Jubilee Mass, June 25, at the Cathedral of St. Andrew in Little Rock. Father Reaves, diocesan director of prison ministry, was the only jubilarian this year, celebrating 25 years of priesthood May 21.

Aprille Hanson
Father Phillip Reaves gives Communion during the priest Jubilee Mass, June 25, at the Cathedral of St. Andrew in Little Rock. Father Reaves, diocesan director of prison ministry, was the only jubilarian this year, celebrating 25 years of priesthood May 21.

While everyone has to discern their life’s path, most have not had as drastic a fork in the road as Father Phillip Reaves — sacrificing self to serve the Lord or being a millionaire.

He was destined to be an accountant for an oil company his father’s cousin was starting. About seven or eight years ago, after selling off an oil lease, each of his cousin’s children received $1 million after taxes.

“I said, ‘Hey, where’s my million? I thought I was one of your kids?’ He said, ‘Well, if you hadn’t left the company and gone into the seminary you would have got a part.’ I could be a millionaire now,” Father Reaves said with a laugh.

Admittedly he wouldn’t mind having a million dollars, but celebrating his 25th jubilee of priestly service has been worth it.

Father Reaves’ faith was instilled at an early age with family prayers and rosaries. After his father died from his third heart attack when Father Reaves was only 12, he leaned on his Catholic faith and credits his father’s prayers for sowing the seeds of a religious vocation.

“My father would always add a prayer that if my brother, my sister or I had a calling to the priesthood or religious life, that we’d be open to it,” he said.

Father Reaves attended the University of Arkansas Fayetteville, rooming a semester with Father Mark Wood, and earned an accounting degree. He was an accountant in Fort Smith and then a sales and service representative for oil field equipment in Casper, Wy. While driving across the South Pass, he contemplated a Knights of Columbus meeting the night before where the knights were told if they knew anybody who would be a good priest to encourage them to discern.

“I was the only single guy in the room and no one said a word. And I just thought well I don’t need them to,” he said, adding “I’ll never know unless I find out, unless I give it a try.”

He entered the seminary in 1985 at 24 years old, but Diocese of Little Rock Bishop Andrew J. McDonald later made the heartbreaking decision to not allow him to continue priestly studies because he has epilepsy, with fears that he’d suffer a seizure alone in a rectory or while driving.

“I was just like, ‘Gee, what am I going to do?’ From that point it was devastating. I could have gone back to Wyoming and worked in the oil field,” he said.

On July 20, 1989, he underwent brain surgery, developed only six years prior, to remove one-third of his right temporal lobe.

“So I went from having seven auras and seizures a month to I’ve had two in 30 years, and none in 25,” he said.

At his jubilee Mass, he was told, “‘Oh a friend of mine said he went to confession with you after 20 years and that it was the best confession he’s ever had.’ I know he needed that moment from God and I was the one sitting across from him. I’ve had several people tell me that,” he said. “The other day in prison I heard a guy’s confession who had been away from the Church for 26 years.”

In February 2017, he was appointed the director of prison ministry, while still working in parishes in Arkadelphia, Malvern and Fordyce. In May, he became the fulltime director.

Father Reaves visits the Varner Unit in Lincoln County, Ouachita River Unit and the Omega Technical Violator Center, both in Malvern, and the Arkansas Juvenile Assessment and Treatment Center in Alexander. On a typical day, he walks the barracks with a notepad, taking down inmate requests and listening to those who vary from a teenager in juvenile detention to those serving life sentences. He celebrates Mass and leads RCIA classes.

“For some people, prison is the place where they actually allow God to work in their life for the first time ever,” Father Reaves said. “They’ve been out, they’ve been living the life, allowing the culture to give them direction. And then they realize that that’s not going to work. Prison for some of them is where they hit bottom and realize they can’t do it all on their own. So just seeing that is really a blessing.”

SEE MORE PHOTOS related to this story at Arkansas Catholic's Zenfolio page, and order prints if you like. You also can browse other photos taken by Arkansas Catholic photographers.
Click for the Jubilee! A series in celebration index