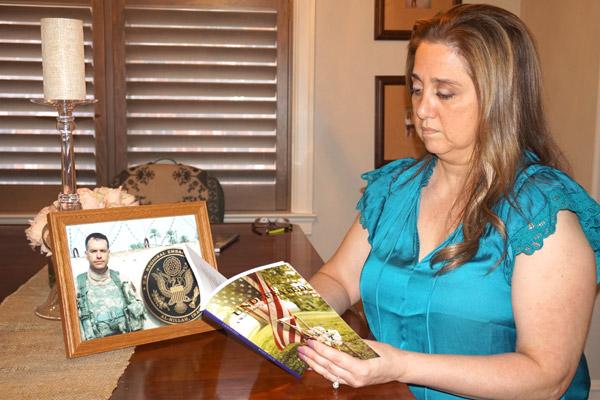 Aprille Hanson
Wendy Taylor, a parishioner of Immaculate Conception Church in North Little Rock, flips through the pages of her book, “Undefeated: A War Widow’s Story of Faith and Survival.”

Aprille Hanson
Wendy Taylor, a parishioner of Immaculate Conception Church in North Little Rock, flips through the pages of her book, “Undefeated: A War Widow’s Story of Faith and Survival.”

Where to find it

“Undefeated” can be found on amazon.com and barnesandnoble.com. More details can be found at privatesorrow.com.

Michael Taylor was at basic training in Biloxi, Miss., when he made an important phone call to his high school sweetheart Wendy.

“He was just soft spoken and sweet and very kind and gentle with me which was rare for a teenage boy I thought,” Wendy said.

The two married at 19 and built a life together: two children, a home in North Little Rock just three minutes from Immaculate Conception Church and a career in the Arkansas Army National Guard as a Black Hawk helicopter pilot.

But on Jan. 20, 2007, Maj. Michael Taylor, 40, the pilot in command, and 11 others were killed when their UH-60 Black Hawk helicopter was shot down by enemy fire in Baghdad during Operation Iraqi Freedom.

Wendy Taylor, 52, turned her pain and grief into a book “Undefeated: A War Widow’s Story of Faith and Survival,” published in 2017.

“I felt like I had nothing; everything had been ripped away from me. The person I was disappeared that day, because there’s not much left of that person. ... Then I realized all I had was God,” she said.

After Taylor joined the Arkansas Army National Guard in 1986, he experienced several deployments, including rescuing Hurricane Katrina victims from rooftops in New Orleans in 2005 and a 10-month tour in Saudi Arabia. In 2006, Taylor volunteered for an 18-month mission in Iraq.

Taylor said Immaculate Conception parishioners were her support system after her husband’s death.

“They just rallied around us and took care of my kids when I couldn’t be there,” she said.

Father James West, pastor at the time, “kind of took me under his wing.”

“It was only her faith that enabled her to get through this,” said Father West, who is now pastor of St. Edward Church in Texarkana. “It was amazing to me how strong she was. I would attribute that directly to her faith.”

Taylor said of God, “I was just an empty vessel when everything was taken from me like I had to start from scratch so that allowed him to come in and do very beautiful things. I felt the Blessed Mother a lot too. It’s not that I didn’t have to go through severe pain, crying all the time and wondering when it is going to stop. But I think people witnessed my faith and I think that’s part of what God wanted.”

“It was healing, but very, very difficult and I just kept telling myself the pain that I’m feeling now will be worth the help I’ll be giving others. But I told God, ‘If I do this, I’m going to be completely raw, honest and open, like naked to the world,’” she said.

Taylor published “Undefeated” in 2017, with book tours taking her as far as New York and Washington D.C.

Though her world will never be the same, there are bright spots in her life. Her daughter Meredith, 18, graduated from Mount St. Mary Academy and will attend Hendrix College in the fall. Her son Justin, 23, graduated from Catholic High School and West Point Military Academy, married and is attending the Airborne and Ranger Training Brigade at Fort Benning.

In November, she married Doug Young, a fellow parishioner.

Father West called the book “a very inspiring story of faith,” and said parishes would benefit from hearing her message.

“God has given her the strength and she has a message that others need to hear,” he said. “Not only others in her situation or circumstance, but everyone needs to hear how her faith carried her through this because it’s inspiring to anyone who hears that.”

Where to find it

“Undefeated” can be found on amazon.com and barnesandnoble.com. More details can be found at privatesorrow.com.