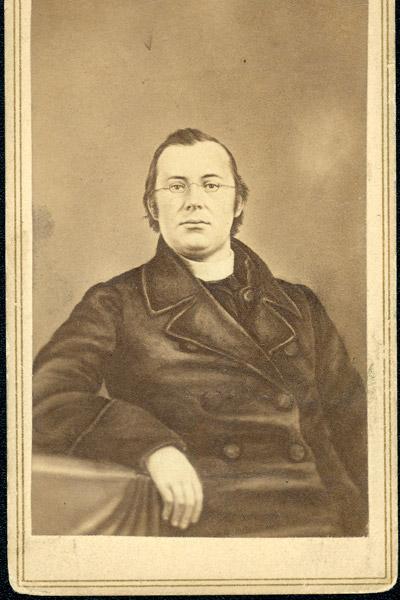 Missouri Historical Society
In this “carte de visite” photo taken around 1860, Father John Bannon is shown “before he joined the Confederate Army” according to a handwritten note on the back.

Missouri Historical Society
In this “carte de visite” photo taken around 1860, Father John Bannon is shown “before he joined the Confederate Army” according to a handwritten note on the back.

On the battlefield, Irish priest Father John Bannon was armed with a Bible, a tourniquet and a bottle of whiskey. Those items speak to his spirituality, care for soldiers and grit.

Following the Civil War Battle at Pea Ridge (Benton County), Father Bannon wrote in his journal, “I am doing God’s work, and he has no use for cowards or skulkers. A Catholic priest must do his duty and never consider the time and place. If I am killed, I am not afraid to meet my fate. I am in God’s keeping. His holy will be done.”

“I was impressed by three things: respect, love and someone with whom soldiers could be honest with,” said Kerry Jones, a park guide with the National Park Service for 13 years, who read two books on Father Bannon ahead of his 90-minute presentation. “… Also I’d underscore courage. A number of different times even here on our battlefield, he exposed himself dangerously to gunfire.”

“I am doing God’s work, and he has no use for cowards or skulkers.” Father John Bannon, in his journal after the Battle of Pea Ridge

Father John Bannon was born Dec. 29, 1829, and grew up in the village of Roosky, along the River Shannon in Ireland. He attended Castleknock College, a Vincentian secondary school that is one of the oldest boys schools in Ireland, established in 1835. After studying at St. Patrick College in Maynooth, he was ordained to the priesthood on June 16, 1853, for the Dublin diocese, according to the article, “John B. Bannon: Chaplain, Soldier and Diplomat,” by James Gallen, published on civilwarstlouis.com/History/fatherbannon.htm and in other publications. For six years, Father Bannon studied metaphysics, theology, rhetoric, logic and natural philosophy, Jones said.

“He was a very well-educated man there’s no doubt about it,” Jones said, adding he kept a journal throughout the Civil War, “speaking in broad strokes about the terrible carnage and destruction in war.”

He came to the United States to serve Irish immigrants in the Archdiocese of St. Louis. He briefly served with a militia and became outspoken with pro-Southern sentiments from the pulpit. Father Bannon was reported to the federal authorities by his parishioners, Jones said.

When federal officials came to arrest him at the church in December 1861, he “escaped out the back door, donned a disguise in a big black slouch hat, a beard” and preceded to ride on horseback 200 miles to Springfield, Jones said, eventually becoming a chaplain under General Sterling Price with the First Missouri Confederate Brigade of about 1,000 men, Jones said.

“He was personally involved in combat, which most priests and ministers didn’t do during the Civil War,” Jones said. “… It was very common for him to walk up and down the front lines.”

On March 7 and 8, 1862, about 23,000 soldiers fought the Battle of Pea Ridge, northeast of Fayetteville, according to nps.gov. Despite the Confederates’ greater numbers, the Union won, giving federal control to the majority of Missouri and northern Arkansas. There were more than 3,300 deaths.

In regard to the final day of battle, Father Bannon wrote, “It was a gloomy night on that battlefield, a cold March wind swept across the ridge and struck a chill like a death camp to the hearts of men.”

He led a gun crew, yet carried no weapon, and was threatened with arrest three times, Jones said, by General Earl Van Dorn for refusing to fall back and tend to wounded off the battlefield.

Father Bannon told the general, “I can attend there later; I must attend now to those who are not able to be removed from the field.”

He served with the brigade until 1863. He was a prisoner of war twice, including at the fall of Vicksburg.

“There was a great scene involved with John Bannon where he mounted this big, beautiful black horse and rode about a mile,” to give last rites to a soldier while in Vicksburg, Jones said. “Both the Union and Confederate (soldiers) … waved their hats and waved for John Bannon … He was universally respected.”

On Aug. 30, 1863, Father Bannon met with and was asked by Confederate president Jefferson Davis and secretary of state Judah Benjamin to complete a secret diplomatic trip to Ireland in an effort to discourage Irish immigrants from joining the Union Army. He offered to speak with Pope Pius IX to encourage him to recognize the Confederacy, in hopes other European powers would follow.

With $1,500 in gold, Father Bannon went to Italy and then Ireland from the fall of 1863 until May 1864. He met with Pope Pious IX, who did not recognize the Confederacy.

“It was a very close thing and it caused a real stir in the Northern press back home,” Jones said. “… The pope at that point in the war was not going to recognize the Confederacy mainly because they were attached to the evil institution of slavery.”

Father Bannon went on to publish editorials in local publications, handbills and posters hung at churches and seaports. While there’s no clear data if his campaign led to a cut in Irish migration, “the Confederate government voted him a special thanks,” which was rare, Jones said.

Facing either incarceration or death in the U.S. after the Civil War ended in 1865, Father Bannon stayed in Ireland. He became a Jesuit and was a popular priest until his death July 14, 1913, at 83.

Beyond his historical uniqueness, Jones said his nature as a respected confidant is something relatable, making it “important to remember his story.”