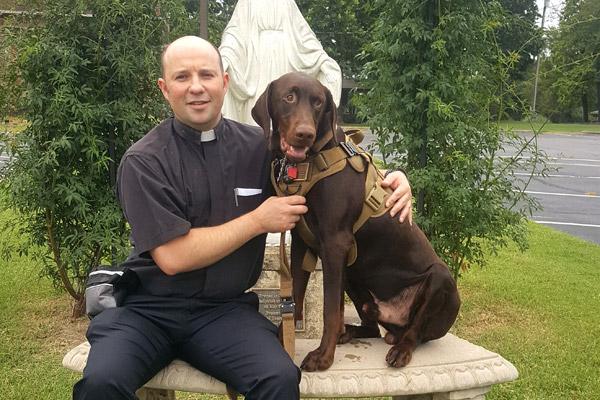 Maryanne Meyerriecks
Cletus, a mixed-breed dog adopted near Christmas, and his owner Father Matt Garrison take a break outside Sacred Heart of Mary Church in Barling. Cletus is being trained as a therapy dog for service members and veterans.

Maryanne Meyerriecks
Cletus, a mixed-breed dog adopted near Christmas, and his owner Father Matt Garrison take a break outside Sacred Heart of Mary Church in Barling. Cletus is being trained as a therapy dog for service members and veterans.

BARLING — Father Matt Garrison is strengthening his work with the military and veterans by training his dog Cletus to be a therapy dog.

The pastor of Sacred Heart of Mary Church in Barling and Sts. Sabina and Mary Church in Jenny Lind is also a chaplain for the Arkansas Air National Guard’s 188th Wing.

The 2-year-old chocolate lab-weimaraner-doberman mix came into his life unexpectedly.

“I met Cletus in Helena the day after Christmas,” Father Garrison said, “and he came into the waiting room at the vet’s office, sat in front of me and put his paws into my lap. That was it. I packed his bags and brought him home. He and Jonah (the priest’s 10-year-old lab) get along great.”

In March, one of the members of the Air National Guard asked Father Garrison to consider training Cletus to be a therapy dog. He brought the dog to an interview at Service Dogs of Distinction in Fayetteville, and the directors agreed he would be a great match for their program.

“Typically, they match dogs to veterans with PTSD (post-traumatic stress disorder) but sometimes people can bring their own dogs if they have the appropriate character and demeanor,” Father Garrison said. “Since I work with a lot of military folks who could potentially be affected by PTSD, they agreed to do the training for me.”

Cletus and Father Garrison travel to Fayetteville every Friday afternoon and have completed four months of the 12-month training program. Cletus has completed his canine good citizenship test and will take an additional test soon toward the final goal — the public access test. Cletus wears a vest indicating he is a therapy dog with the Air National Guard and bearing a cross to show he is the chaplain’s dog.

Cletus was named after St. Cletus, who served as pope from 80-92 A.D. The name Cletus means “unimpeachable and entirely trustworthy.”

“He’s really making eye contact and just seems, especially when I take him out to the base, to be very in tune to what’s going on and the mood of the people who are working,” Father Garrison said. “He kind of sits quietly and waits for people to come up and pet him, and it seems to calm the environment, especially when we have some tense situations.”

As Father Garrison gradually introduced him to encounters in different situations from Home Depot to Vacation Bible School, he saw his “entirely trustworthy” therapy dog change the hearts of people who always feared dogs.

“When I have the opportunity to introduce Cletus to them and explain his background and purpose, they sometimes decide they would like to adopt a dog after our visit,” he said.

Cletus has also helped him in his ministry at the Air National Guard.

“At times, the mission that we have out here at the 188th can be kind of intense and mentally and emotionally taxing on the people who work out there,” Father Garrison said. “There have been certain occasions where I’ve been able to engage with some people who may not have been open to conversation before and a few people who have really needed to open up and be able to have conversation about things going on in their lives.”

As Cletus progresses in his training and develops more impulse control, Father Garrison will be able to take him to more events at church and visit parishioners who are homebound or in nursing homes.

Although he wasn’t sure whether he wanted to get a second dog after the death of his older dog, Baruch, Father Garrison said that Cletus has been a great addition to his family.

“I am constantly amazed at the gifts revealed within Cletus during each session and during our training throughout the week. He is such a loyal and giving dog,” Father Garrison said.