Never miss out with an Arkansas Catholic subscription 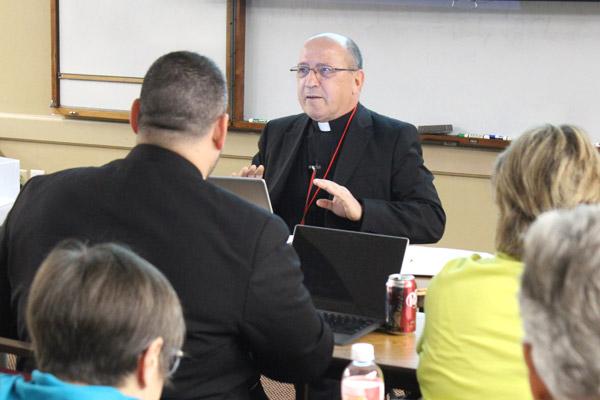 Visions of Mary in Arkansas, Texas not substantiated

WASHINGTON -- The Diocese of Fort Worth, Texas, said claims that Bishop Michael F. Olson has authenticated local sightings and messages of Mary are “not true.”

JACKSON, Miss. (CNS) -- Mississippi’s Catholic bishops joined with the state’s Episcopal, Methodist and Lutheran bishops in condemning the Trump administration’s Aug. 7 raid on seven food processing plants in the state to round up workers in the country illegally.

Direct from the Vatican

Irene Marie Zimmerman Hoyt, 93, a member of St. Elizabeth Church in Oppelo, died July 4. She is survived by ...

‘We need peace to change this tragedy’ after shootings

WASHINGTON -- Father Fabian Marquez attended 17 funerals. He officiated one and attended the other 16, including one in Chihuahua City in Mexico.

All hymns, all the time: ‘Great Catholic Music’ makes debut on web, app

WASHINGTON -- Catholics hear hymns in church, but hardly ever on the radio. Now they can augment their weekly diet of hymnody through a new free audio streaming service called Great Catholic Music.

Trophy for the house

Ozark Catholic Academy high school students and their sponsors celebrate winning the house competition at the end of May with a trophy. (Catholic Schools Herald Photo)

What is the significance of catching ‘153 fish’?

Q. Recently the Gospel reading at Sunday Mass was from the 21st chapter of John, where Jesus appears to the apostles after his resurrection and tells them to lower their nets into the sea -- and they catch 153 fish. Our visiting priest said in his homily that the number 153 related to the number of regional territories in that era. But then I read Bishop Robert Barron’s explanation -- that 153 was the number of species of fish known at the time. I’m confused. Which is it? And does it matter? Help! (Question Corner, Seeds of Faith)

The Eucharist is the greatest treasure the Church has

A Pew Research Center study was recently released, and many have found the results stunning. According to the study, less than a third of all Catholics believe the doctrine of transubstantiation -- that the Eucharist is actually the body and blood of Christ. (Columns)

Epidemic. That word has been used countless times to describe the spate of mass shootings carried out since the massacre at Colorado’s Columbine High School in April 1999. It’s a word that not only implies but demands a connection between disparate events that have taken place in every corner of the United States over the past 20 years. (Guest Commentary)