Benedictines prepared for six years to take their perpetual vows 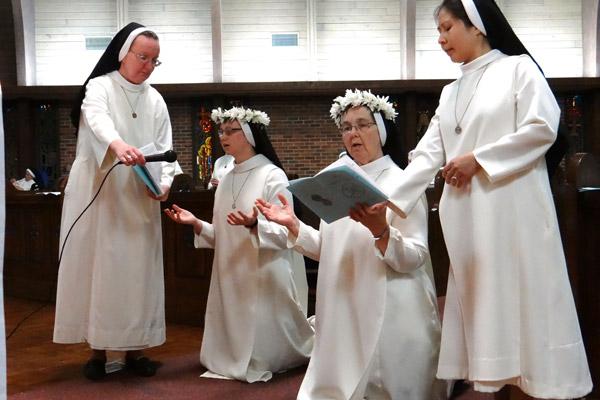 Jessica Luttmer had hoped for a career in teaching and attended college. Anne Carter studied history and then social work, but worked throughout the years as a home health aide, cashier and as an administrative assistant.

Both women, then 20 and 54, had started down the path that many others have traveled. But God gave them a fork in the road, leading to Aug. 15 where they made their perpetual profession as Olivetan Benedictine sisters at Holy Angels Convent in Jonesboro on the Assumption of the Blessed Virgin Mary.

“It feels exciting and it’s kind of a wow moment because you’re saying yes to God and going to be with all of your sisters now and you are family,” Luttmer, 27, told Arkansas Catholic the day before her profession. She is now known as Sister Catherine.

“A little nervous, but really excited and blessed,” Carter, 60, said.

She is now known as Sister Maria Rose.

About 50 people attended the Mass, including relatives of Sister Catherine’s from Texas and Sister Maria Rose’s family from Louisiana.

“The most powerful moment of the Mass was receiving my ring and truly being a bride of Christ,” Sister Catherine said. “How I am feeling by officially being an Olivetan Benedictine sister is that I am filled with joy, happiness and love for Christ.”

Growing up the youngest of five children in Lindsay, Texas, Sister Catherine developed a closeness to God and family. She visited Holy Angels with other eighth-grade students and continued visiting for the calming environment. She studied teaching at North Central Texas College in Gainesville, attending daily Mass before classes. Coupled with more time in adoration, her calling became clear, entering Holy Angels in 2012.

“Joining Holy Angels I could feel the peace here … I felt like this was home to me, and I really feel that God has called me to be with this community,” Sister Catherine said.

After her first vows in 2014, she was a substitute and teacher’s aide at Blessed Sacrament School as well as teaching religious education for two years.

“I love the children, but I have a problem disciplining them,” she laughed. “He didn’t give me that gift.”

For most of the past seven years, she’s spent time in pastoral care, ministering at St. Bernards Medical Center in Jonesboro. No days are the same, as the sisters visit various patients, from newborns to adults recovering from surgery, to minister and pray. When the patients are not Catholic, she makes it a point to say “that’s not what’s important to me, that’s not why I’m here. I’m here to visit with you and to pray with you.”

“There was a mom and a baby; the little baby was not doing well. So I felt that God helped me through the situation and I firmly believe — I pray to the Holy Spirit each time I go to a patient’s room because I don’t know what I’m going to go through or what’s going to be behind that door — I believe that God helped me to give me the right words to say a prayer with this mom,” Sister Catherine said, adding the mother felt “at peace then.”

Looking toward her final vows, she said she hoped her prayer life would grow and her deep love for God would continue to show, following in the example of St. Catherine of Siena.

For Sister Maria Rose Carter, it would take 54 years to walk into Holy Angels to follow her call. Also the fifth and youngest child, raised in the small town of Lutcher, La., she first felt the call to religious life at around 6 years old. Her aunt, a religious sister, would visit and “I was really taken in by everything with her” from her love of God to her habit.

“Over the years it kind of never left me. Sometimes it would hide away and not show itself and other times it would pop up,” she said.

After attending Southeastern Louisiana University, she worked a variety of jobs, including 10 years as an administrative assistant with the Office of Juvenile Justice in Baton Rouge. When she was laid off, “it was when I really started discerning what I wanted to do.” For about 22 years, she went to Mass primarily at Christmas and Easter only.

“I started praying the rosary and going back to the church ... That first time back we had a priest who was new to the priesthood himself, only about 18 months is what he said; the sermon he gave just clicked for me and I knew I had to talk to him about wanting to be a sister.”

After a pilgrimage to Medjugorje in Bosnia in 2011, she cried praying her rosary, asking the Blessed Mother “to let me know if God was truly calling me.”

Her dream that night showed two priests and a nun with long dark hair at Medjugorje. “I was allowed to hug her and when I did, her waist was at my cheek,” elevated above her. The nun said “Jesus.”

“To me, that was the Blessed Mother, I have no doubt about it,” she said. Holy Angels, which matched the habit she saw in her dream, was one of the few that accepted her as a middle-aged novice.

Her name, Sister Maria Rose, is both her middle name and Rose after the Blessed Virgin Mary Mystical Rose. After entering Holy Angels in 2013, she has served primarily as the assistant to the treasurer.

“I want to be the sister that God wants me to be,” as well as a “model sister” in obedience, she said. “A sister who is Christ-like in every way because he was obedient until death; humble like he was, merciful like he was, loving like he was. I know that I’ll never be exactly like he was, but that’s what I’m hoping to be by the time I leave this world is more like him.”