Two seminarians will be ordained priests, five to the diaconate next year 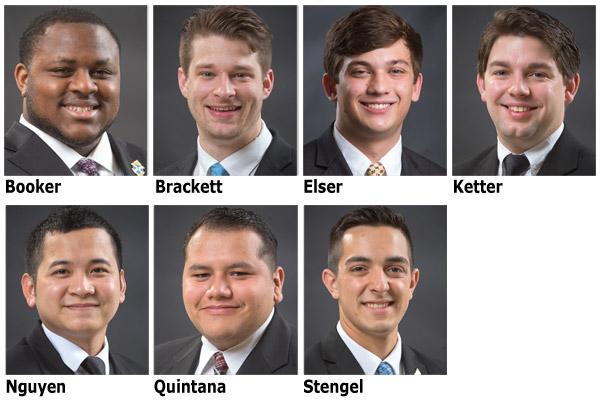 The new seminarians are:

• Duwan Booker, 22, a member of St. Joseph Church in Conway. He is the son of LaDarius and NaKeisha Chambers.

• Joel Brackett, 21, of St. Vincent de Paul Church in Rogers. He is the son of Burke and Kristi Brackett.

• Christopher Elser, 19, of Christ the King Church in Little Rock. He is the son of Dr. Joe Elser and Angie Elser and brother of Father Stephen Elser of Pocahontas.

• Colton Ketter, 20, of Sacred Heart Church in Charleston. He is the son of Joseph and Sabrina Ketter.

• Hong Dai Nguyen, 24, of the Cathedral of St. Andrew in Little Rock. He is the son of Vinh Nguyen and Mai Thi Do.

• Pablo Quintana, 21, of Immaculate Heart of Mary Church in Magnolia. He is the son of Juan and Clara Quintana.

• Samuel Stengel, 18, of St. Joseph Church in Paris. He is the son of Carl and Jana Stengel.

Elser is attending Assumption Seminary in San Antonio while the other new seminarians are living at the House of Formation in Little Rock and taking classes through Newman University in Wichita, Kan., and UA Little Rock.

Friend and Velasco are scheduled to be ordained priests at the Cathedral of St. Andrew in Little Rock May 23. Diaconate ordinations will be held in May for Smith, Torres, Riley, Cundall and Galván.

Why are you Catholic? I have my four passionate reasons