MSM teacher pushes others to conquer the race of life

Not athletic growing up, Bobbi Barrett inspires others to give running a try 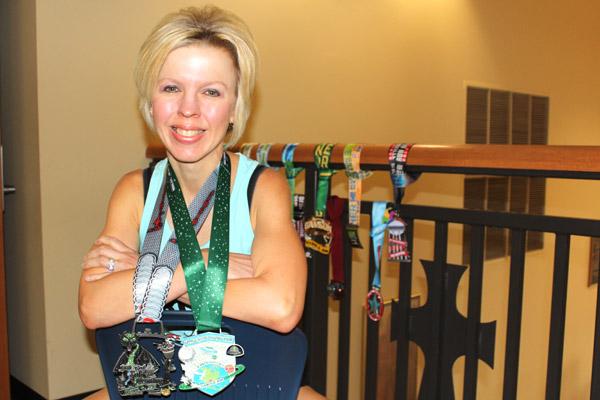 Dwain Hebda
Mount St. Mary Academy math teacher Bobbi Barrett displays some of the hardware earned through completing half marathons. The first-year Mount teacher has also been the legs for wheelchair-bound race participants.

Dwain Hebda
Mount St. Mary Academy math teacher Bobbi Barrett displays some of the hardware earned through completing half marathons. The first-year Mount teacher has also been the legs for wheelchair-bound race participants.

Pint-sized though she may be, Bobbi Barrett is every inch a runner. Striding purposefully through the halls of Mount St. Mary Academy in Little Rock, you notice a quick-twitch nature in her gait, like a rabbit that given a reason would be gone in a flash.

Even her manner of speech has a runner’s cadence, a rhythm of staccato words, laughter, a quick smile. In repose she sits easily, lightly; her mind at rest but on the road.

“I don’t know that I have a set time, but I try to do better than before, anything better, even if it’s 20 seconds better,” she said of her weekday 4- and 5-mile jaunts and her 8- to 10-mile weekenders. “I think to myself. A lot of times it is nice to be on your own and think about things.”

Barrett, who’s been a math teacher for a dozen years, is in her first at Mount. She’s been running since grad school and competing in all manner of organized races for about eight years. Growing up in Cabot, she would have unleashed a torrent of trademark giggles had you told her she’d be obsessing over training times at age 36.

“I tell everybody, this is how you start; you don’t get to these half marathons in just a couple weeks.” Bobbi Barrett

“In high school and college, I was not athletic at all,” she said. “I didn’t play sports. I was really into drama. I did choir, performing-type things. Sports, athletics, none of it ever interested me.”

“I remember thinking, ‘I can’t believe those people run for fun!’ I couldn’t imagine I could ever run a mile.”

A boy changed all that, her husband Bobby to be exact. They met when she was earning her master’s degree at UA Little Rock.

“I had started walking and I kind of cared a little bit more about how I looked because I met him and I was feeling better doing that,” she said. “I was walking pretty regularly and then I just said, ‘I wonder how much I could run?’”

As anyone who has done it regularly knows, running is the opiate of the athletic world. It’s always available and easy to fall into requiring no special equipment, facilities or even another person. As profoundly as it affects your body, it permeates your mind that much deeper. And once it has you, all you want is more.

“I did a 5K maybe seven or eight years ago. Then I ran a couple of 10Ks, right around my 30th or 31st birthday,” she said. “Everybody kept saying, ‘Why don’t you do a half [marathon]?’ I was thinking six miles versus 13.1 miles, that seems like a big difference. But once you get to six or seven, you have your endurance up. If you can do it for that long, you can do it for the other amount.”

Barrett took the plunge and today has nearly a dozen half marathons to her credit. The mammoth medals she’s won — made to look all the larger on her small frame — are as much travelogue as awards. Memphis, Little Rock, St. Louis, Oklahoma City, each has a particular memory and all testify the same goal: run the next one faster.

As it happens, one of her most remarkable races didn’t come close to her target time. A running friend of hers posted a video of her pushing a girl in a wheelchair in a race, part of a Fort Smith-based organization, Ainsley’s Angels.

“The videos and pictures were super-moving, very inspirational,” Barrett said. “Ainsley’s Angels have angel runners for people who cannot run on their own. (My friend) said it was so much fun, it was so cool, she would recommend it to anybody.”

Barrett contacted the group and for this year’s Little Rock Marathon was paired with another able runner and took turns pushing an 8-year-old named Gabe through the half marathon course. It was as challenging as anything she’d thus far done.

“I have no children, so I’ve never even pushed a stroller,” she said. “I told (partner runner) Neal, that it was definitely a God thing because there was no way I could have done it all by myself. He had run half marathons before, but not pushing in a half. He said, ‘This is like baptism by fire.’”

“The weather this year was horrible. We had rain and sleet and snow, and the wind was awful. There were times when (Gabe) would get kind of upset, and me and Neal were doing what we could. People would stop to try to help. I had somebody who gave him her shirt. Somebody was trying to cover him up. It was really cool, the support. And, we did it.”

The inevitable question, will she run a marathon, is one she shrugs over. Maybe she will, maybe she won’t. She knows how the running dragon works; eventually you tackle a distance that isn’t fun, breaks you down, carves up a knee or a hamstring or your shins and that defeats the purpose.

For now, she’s happy running halfs and below and thinks about maybe organizing a race one day to benefit her new teaching home. And, she’s very mindful about how her hobby can positively impact others, especially her students.