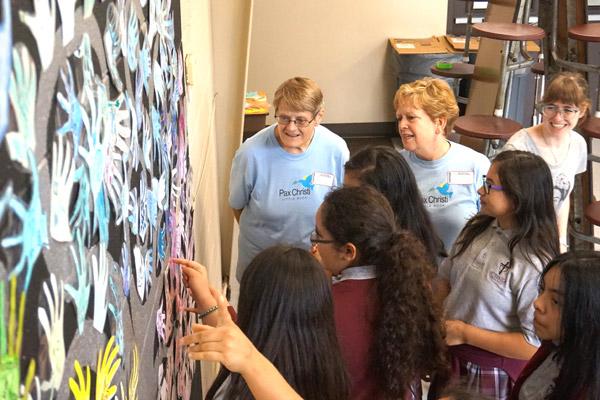 Eighth-grade students Rafael Vargas and Zashenka Cervantes, both 13, proudly smile, pointing to their hand-shaped drawings on the wall mural of a tree in the cafeteria of St. Theresa School in Little Rock. Cervantes’ included strawberries, milk, pencils for her love of drawing and other things that define her in shades of pink. Vargas took the more direct route — using his favorite color green to write words like positivity, poetry, Fabion (his best friend), food and Shrek.

The drawings represented unity and peace, reminding everyone “to be kinder to each other,” Cervantes said.

The art project was inspired by the Pax Christi Little Rock peace curriculum that was given to Catholic schools this year in conjunction with Arkansas Peace Week, an annual event promoting peace activities through the Arkansas Coalition for Peace and Justice. Coinciding with the United Nation’s International Day of Peace, this year Peace Week was observed Sept. 15-22.

Pax Christi’s backpack program, which collects school supplies for students, is where the peace partnership with Rockefeller began. In 2018, the peace curriculum was passed along to the entire Little Rock School District. This year, it’s been shared in the Catholic schools and the Pulaski County Special School District. No school is required to use the curriculum.

“This is a faith thing. You just sort of spread some seeds and see where they take off. Some places they may not. But to be really honest there’s no way we can control that and monitor all that. We’re just about scattering seeds,” Simon said.

Catholic schools superintendent Theresa Hall said while she hopes schools teach peace daily, having a set curriculum allows teachers to easily implement it in their classroom.

“I think we all need something to make us remember things; it puts it at the forefront of our thoughts every now and then to look at really what can we do to make a difference?” Hall said.

The curriculum, available on arkansaspeaceweek.com/schools, consists of lesson plans that vary in length, teacher ideas, coloring projects and worksheets and online films.

“With all of the problems with crimes, sort of just the character disturbance that’s in the world today, there’s no way to stop that unless we start with our children. To teach them early how to handle it,” Simon said, adding it’s one way to combat the negative influences children see. “It’s everywhere and no one’s saying necessarily that it’s wrong. If they just watched our politicians on both sides we would not be having very good instruction for our children on how to behave. It’s awful.”

The curriculum is adapted for kindergarten through 12th grade, but elementary school is the focus, as their behavioral style is developed most prominently during this time, Simon said.

The lessons center on five themes:

• Making Amends and Forgiving Others

• Serving Others in Need

• Standing with Others Who Are Treated Unfairly

• Speaking Out Against Injustice

The curriculum is inspired by the teachings of promoters of non-violence, including Gandhi and Dr. Martin Luther King, who protested immoral laws with demonstrations like sit-ins.

“That’s creative nonviolent resistance, and it’s beautiful. So I think he gives us so many great examples that we can draw from to show kids today nonviolence is not passive,” Simon said. “It’s more important I think to use that word than to use the word peace. Because peace just seems like, ‘Oh that’s so nice.’ No, it’s not really very nice actually; sometimes it’s breaking the law if (the law is) unjust.”

Betsy Kelly, art teacher at St. Theresa, led students in a Peace Week art project that included all students tracing their hand in rainbow colors, based loosely on “The Tree of Life” painting by Gustav Klimt. Students included things that they liked or made them unique on each hand.

“I think it’s important that they see adults promoting kindness and peace because you know kids are inherently kind,” Kelly said, adding if it’s continually nurtured, “they’ll be loving and peaceful adults, which is what we need in the world.”

Simon said her dream is to raise enough awareness and money to have specially trained educators come into the schools and teach peace curriculum and nonviolent resolution year round.