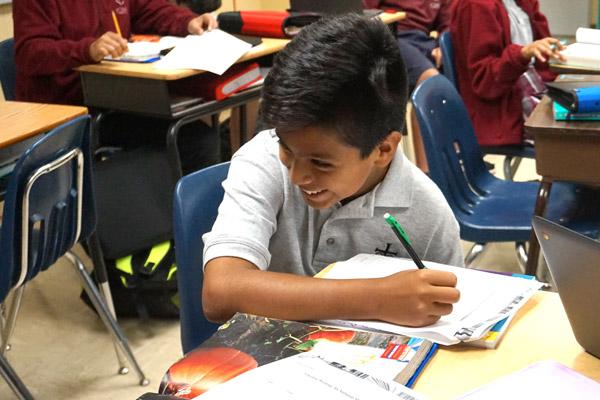 Aprille Hanson
Aaron Estrada, 12, a seventh grade student at St. Theresa School in Little Rock, smiles and laughs with classmates Sept. 6. Estrada attended St. Edward School in Little Rock for years before the school closed permanently in May, leaving him and about 111 other students to find other schools to attend.

Aprille Hanson
Aaron Estrada, 12, a seventh grade student at St. Theresa School in Little Rock, smiles and laughs with classmates Sept. 6. Estrada attended St. Edward School in Little Rock for years before the school closed permanently in May, leaving him and about 111 other students to find other schools to attend.

Part 2 of 2: The aftermath of school closings

Where are they now?

All who walked the busy halls of St. Edward School had their lives changed forever when the school permanently closed its doors after 134 years, the oldest operating elementary/middle school in Little Rock. It was the first of two Catholic schools to close in 2019, with St. Boniface School in Fort Smith announcing its immediate closure July 18.

Following the school’s announcement in February that St. Edward School, pre-K4 through eighth grade, would close May 28, parish officials stated the proposed enrollment was 112 for the 2019-2020 school year, though the number could not be confirmed by the Catholic Schools Office.

In October 2018, there were 143 students enrolled. Fourteen students graduated in May 2019. Of the remaining 129 students, 77 are currently enrolled in other Catholic schools. (See sidebar, page 4)

Principal Kristy Dunn said, “I’m complimenting the St. Edward community in the formation of these kids. They are well-spoken, great manners, their faith is very strong and they’re attending to their academics wonderfully. I’m so happy to have them.”

With 80 percent of the student body on financial aid, including 23 of the St. Edward students, Dunn explained “SOS funds,” raised to help save St. Edward School, were given to St. Theresa to allow school to “not to absorb those scholarships all on our own,” she said.

Remaining “Save Our School” funds totaled $71,456.97, said Theresa Hall, superintendent of Catholic schools. Funds were divided among the Catholic schools that took in St. Edward students.

“Because the money was raised for the school, because the school closed, it should go to the students to continue on,” Hall said. “All of those schools that took those students, some didn’t pay registration, some of them have discounted tuition and that helps cover that cost for them.”

In part because of increased enrollment, St. Theresa School hired assistant principal Jasmine Gonzalez, who is bilingual. St. Theresa also has three teachers who had worked at St. Edward, two of whom had lost jobs because of specialty classes being cut prior to the school closing.

“I brought him here because it’s the school most like St. Edward,” Estrada said through an interpreter, adding she loved Dunn’s willingness to accept them. “From the first day he came to visit the school, she asked his name one time and remembered his name.”

While Aaron Estrada smiled talking about his “super nice” fellow students and teachers, St. Edward was his original home.

“I felt kind of confused and sad for the teachers because they were not going to have a job. I had been there my whole life,” he said, but added he’s happy to still receive a Catholic education. “I feel like I can learn more about the history of Jesus and stories like that.”

Ashley Esquivel, 13, who had attended St. Edward since second grade, said, “I was very sad because I thought I was never going to see my friends again.” But at St. Theresa, “I feel really welcomed. The students are really nice.”

Kathy House, principal at Christ the King School in Little Rock, reached out to Amanda Bridges, who taught second grade at St. Edward School, the day after the official closing announcement.

“She brings a lot of professionalism and really a good outlook that’s a little different than some of the other teachers because she’s been in a small school,” House said.

It was a blessing for Bridges, who had just given birth to daughter Lydia.

“I think I didn’t have enough time to go into that panic mode. I had a kid, lost my school, that Friday (House) called me and I had an interview that following week,” she added.

For Bridges, it was more than just switching schools. While St. Edward did not have a principal in 2018-2019 and had cut specialty teachers, Bridges was one of the lead teachers, helping with principal duties like talking to parents and school planning. She also split time teaching art, PE, music, computer class, helping with the library, along with her duties as a second- grade teacher.

“This year, I’m right by my house, I’m not working late, every time I try to do something they say, ‘No, it’s taken care of for you.’ It has been nice. I’m very sad that I lost my school but it’s been almost like a dream job,” Bridges said, adding she’s always wanted to teach third grade. “They scooped the pieces up and gave me something I can enjoy.”

Part 2 of 2: The aftermath of school closings

Where are they now?