He had to deal with addiction before finding his vocation 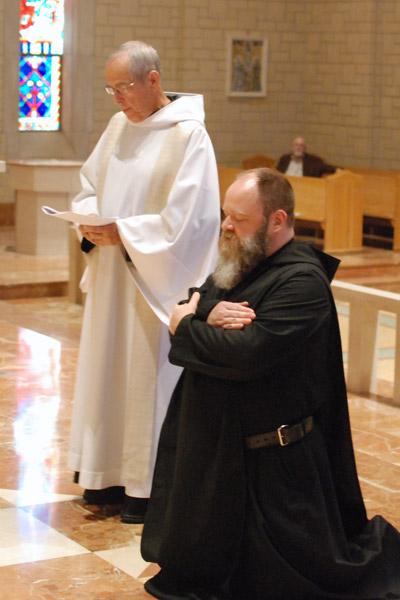 As a child, Luke Petree would dive into a world of knights, wizards and kings with each turn of his latest fantasy or sci-fi book. In many stories, a religious figure, often in a monastery, would be a character in the background.

“It always kind of captivated my interest,” the cradle Catholic said. “I sort of romanticized about that life, about that dedication … but I always thought at the same time that’s a fairytale, that’s a pipe dream.”

Throughout his life, the fantasy would converge with reality. There were demons of addiction to fight and while all hope was lost for a time, God was the savior who pulled him out of the darkness.

On Aug. 31, Petree, taking the name Brother Irenaeus, made his final vows as a Benedictine monk with Subiaco Abbey.

Brother Irenaeus, 44, was born and raised in Jefferson City, Mo., the younger of two sons to J.D. Petree and Elaine Thompson, and stepfather David Thompson. He attended the Cathedral of St. Joseph and the cathedral’s school from first through sixth grade. He was mature in his faith as a young boy, excited to serve on the altar, but, “I got rid of that maturity when I turned into a teenager.”

He went to public high school, and the tug of war between God and the world began. He began drinking and partying around 16.

“I thought the world seemed so interesting, this great, wonderful canvas and all these experiences to have, and I’ll go find that and come back to God later,” he said. “That was a very dangerous thing to do. I knew I was kind of playing with fire a little bit, but I was just like ‘Eh.’”

After high school, he bounced around entry-level jobs, from working in a restaurant to a bookstore. He then worked on and off for the State of Missouri but would get fired from jobs when his drinking became out of control.

“I had pretty much figured I was going to be going to hell” for being an alcoholic, he said, adding that at the height of his addiction, “I was certainly drinking daily. I’d basically come home from work and drink until I couldn’t anymore. Get up the next day, go to work and start it all over again,” drinking about two bottles of wine a day.

His family staged an intervention when he was 35. He has been sober for seven years.

He returned to clerical work for the Department of Natural Resources for the state of Missouri but the dream of religious life resurfaced. He visited Subiaco before touring other orders, including the Franciscans.

“When I came back up, my mother said I was very excited and full of joy. I’m not really good at seeing those kinds of things in myself,” he said.

Brother Irenaeus entered Subiaco in 2015. He chose St. Irenaeus (130-202 AD) as his namesake, admitting, “He’s one of the most little-known, best-known saints out there.” The saint wrote one of the first apologetics books “Against Heresies” and is quoted several times in the Catechism of the Catholic Church.

Throughout his years at Subiaco, Brother Irenaeus has worked in various jobs, including as a peanut brittle and hot sauce assistant. For the past year he’s worked in the development office. He enjoys traveling with Brother Damien Cafaro, OSB, selling abbey products at various venues.

For someone who spent their life searching, he finds solace — though morbid to some, he admits — that the next big step in his life will be death.

“The search is over. I still battle the same battles as everyone else does on the same basis. Work is work; you’ve got your good days and bad days. I don’t have to look to find the purpose in life anymore because I already know what it is. Or find my place in life because it’s there. Now it’s doing the best I can to serve God and my neighbor,” Brother Irenaeus said.