Thanks to amendment, Arkansas mothers can surrender newborns at fire stations now 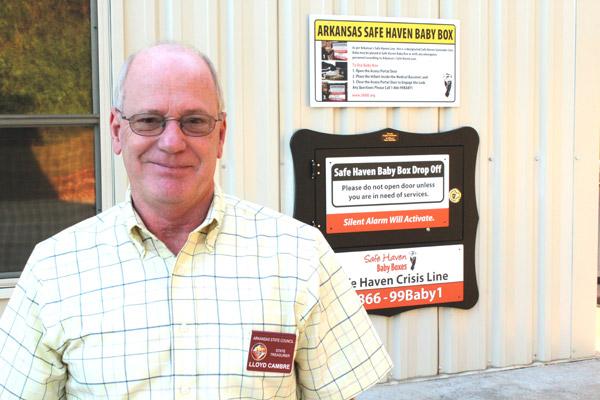 BENTON — Much of Benton has yet to stir as the car pulls into the fire station lot. The vehicle rolls to a stop, but the engine runs as a woman quietly opens the door and climbs out, an oblong bundle in the crook of one elbow.

She makes her way to the back corner of the building on catlike feet, the last few steps of a long, emotional journey. Maybe she never wanted any of this in the first place. Maybe right now she can’t care for herself, let alone someone else. Maybe she’s been kicked out by her family, abandoned by her partner, or maybe she’s been able to conceal this situation all along.

Her hand shakes as she turns the latch on a steel door embedded in the wall of the fire station. Inside, she can see a plastic medical bassinet and pad, the conveyance to a new home and, hopefully, a better life.

Maybe she kisses the child one last time. Or maybe she can’t bring herself to. She slips the bundle into the bassinet, feels the door as it closes, then hurriedly gets into the car and disappears.

That fictional account now has the means to manifest in this growing Central Arkansas community, the first in the state to feature a Safe Haven Baby Box. The feature, located at the Benton Fire Department, 2717 Edison Avenue, gives mothers in crisis a safe and legal means to surrender their baby, no questions asked.

“To me personally, it’s not a matter of if the box is going to be used, it’s when,” said Lloyd Cambre, a member of Our Lady of Fatima Church and an officer in Knights of Columbus Council 9396 there.

“We’re close to Little Rock and Pine Bluff where the abortion rates are a lot higher than any other place in the state. If we can say to those women. ‘Don’t abort your baby, you have another option,’ then great.”

It is illegal for a mother to abandon her infant except under guidelines of a safe haven law, which identifies legal surrender sites meant to curtail infants being left in dumpsters, by the roadside or other endangering locations. Arkansas’s law, passed in 2001, identified police stations and hospitals for this purpose.

Arkansas Right to Life recently appealed to Sen. Cecile Bledsoe, author of the original bill, to add fire stations to that list, said Rose Mimms, executive director. That amendment was signed into law last legislative session and went into effect in July.

Safe haven locations do not have to have a baby box to accept infants, but the secure structures, that resemble an overgrown night deposit box, are popular features because they help preserve the mother’s anonymity. When the child is placed inside, sophisticated technology automatically calls 911, operates locks and maintains air flow.

Shortly after the amendment passed, Benton Fire Chief Bill Ford contacted Mimms to inquire about installing a baby box at a fire station. Mimms connected Ford with Monica Kelsey, founder of the Indiana-based nonprofit Safe Haven Baby Boxes who personally evaluated the proposed location. Her blessing — followed by that of the Benton City Council — set the path for the new feature.

There was only one problem: the fire department budget didn’t have surplus funding to meet the $10,000 required to cover installation and 20 years of scheduled SHBB maintenance. Ford, who is also a member of Our Lady of Fatima Church, called his fellow parishioner Cambre for help.

“Here in Benton, I’m the program director for our (Knights) council,” Cambre said. “I said, ‘We’ll take it on.’”

The Benton group held two bingos and a fundraiser and worked through the state Knights of Columbus Council to get the word out statewide. About 10 councils kicked in money for the effort, Cambre said, noting the fundraising has continued in order to pay for billboards to publicize the baby box. Knights of Columbus councils statewide have also begun inquiring about bringing the feature to their respective communities.

“(Monica Kelsey) has been inundated with calls and I have too, because everyone knows I spearheaded this one in Benton,” he said. “I’ve been coaching them on how we did it and how they can do it. I know there’s about 10 different cities across the state that are anxious for it.”

Cambre stressed the baby box project, “is not a Catholic thing,” and that many churches and other community members backed the idea. Kelsey, however, singled out the Catholic Church for its role in carrying forth her organization’s mission.

“I am just honored to work with so many Catholics and especially the Knights of Columbus, because they’re the real deal.”