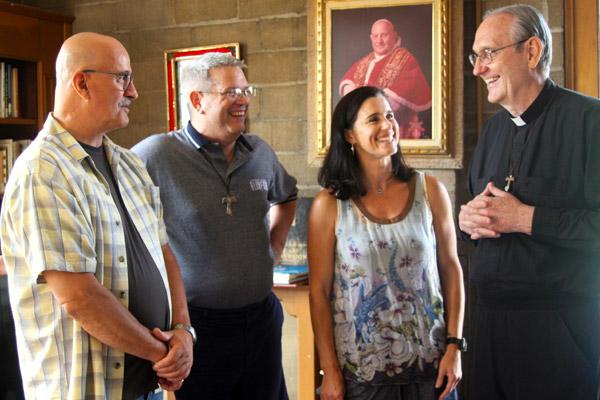 PHILADELPHIA — While belief in the Real Presence has declined sharply among American Catholics, one ministry is placing the Eucharist at the center of its expanded efforts to combat addiction.

“Jesus is the answer to all our questions and the solution to all our problems,” said Father Douglas McKay, who serves as the national chaplain of the Calix Society, an international association of Catholics in recovery. “And we know where he’s at: in the Blessed Sacrament.”

Based in Glenside, Pa., the Calix Society “started over an alcoholic priest back in 1947,” said Father McKay, noting that five concerned laymen, all from the Minneapolis area, petitioned to have a 5 a.m. daily Mass celebrated to pray for an addicted priest’s recovery.

After several weeks, the priest was able to maintain his sobriety, and the Calix Society — named after the Latin word for “cup” — was formed.

Speaking at the group’s annual retreat in August, treasurer Ken Johnston estimated there are currently some 35 Calix chapters worldwide, with more than 200 official members and a number of unregistered participants. Local groups must obtain their diocesan bishop’s permission to form, and priests are asked to serve as chaplains whenever possible.

Meetings generally begin with Mass, followed by reflection and fellowship. Participants join each other in eucharistic adoration and the rosary, along with frequent reception of the sacraments and retreats.

Although the group formed in response to alcoholism, Calix recently changed its mission statement to officially those who struggle with any addiction.

“We’ve opened it up to make it more inclusive,” said Father McKay. “We have people who struggle with heroin, with sex addiction and even people from Overeaters Anonymous. A drug is a drug is a drug,” he told CatholicPhilly.com, the online news outlet of the Archdiocese of Philadelphia.

Father McKay — who has buried hundreds of overdose victims during more than 40 years of ministry — said that unlike in previous decades, many of those who struggle with destructive substances and behaviors now find themselves battling “cross-addictions.”

In addition, traditional “gateway” substances to drug abuse, such as alcohol and marijuana, are often bypassed altogether by youth. “They go right to the pills and then advance into even stronger drugs,” he said.

Tom Gallagher, who leads a Calix unit at a suburban Philadelphia parish, agreed.

“Addiction has definitely morphed, especially with the young kids today,” he said. “They’re in AA (Alcoholics Anonymous) one day and they’re dead the next from fentanyl or from mixing alcohol with pills.”

Johnston pointed out that despite such trends in addiction, Calix’s broadened mission still represents a fairly new development in recovery outreach.

For Calix’s members, the path to sobriety ultimately leads to a deeper union with God through the sacraments, especially the Eucharist and confession.

The sacrament of reconciliation is vital preparation for holy Communion, said a Calix member named Mike.

“The Eucharist is so much more fruitful to me when I’ve made a good confession,” he said. “And that’s one of the things they stress in AA, having a clean house, so to speak.”

After years of spearheading the Calix Society, both Father McKay and Johnston continue to marvel at how sacramental grace and a supportive community can radically renew lives wounded by addiction.

“The Eucharist is heaven’s gravity, drawing us home,” said Father McKay, while Johnston added that the bonds formed through the Eucharist counter the isolation that often leads to substance abuse.