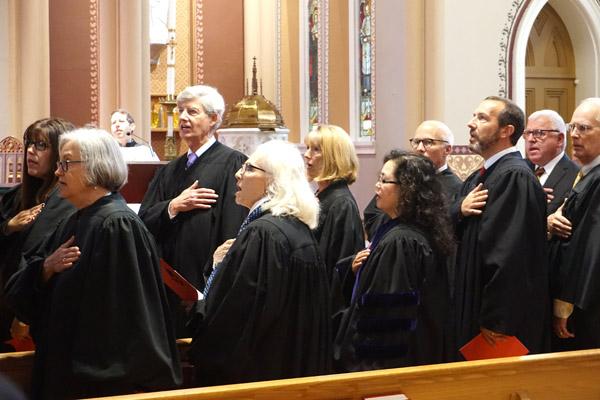 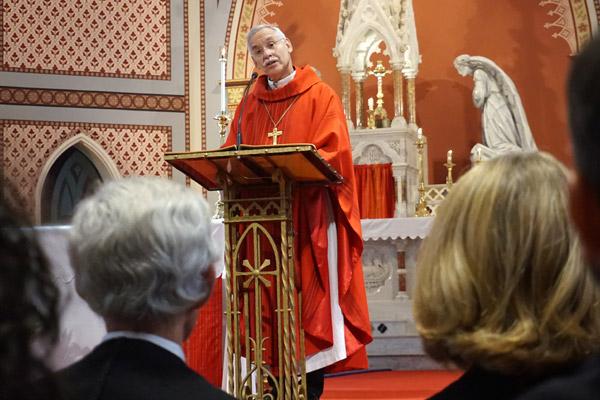 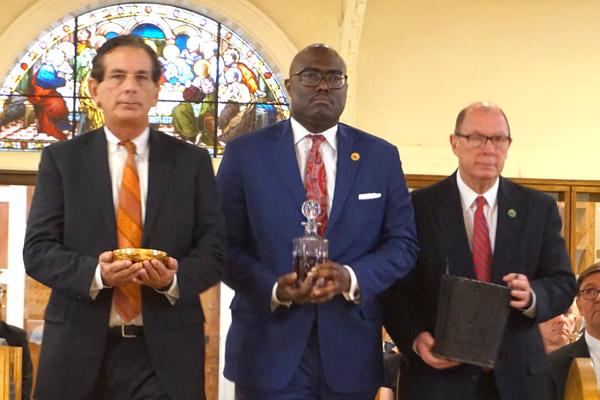 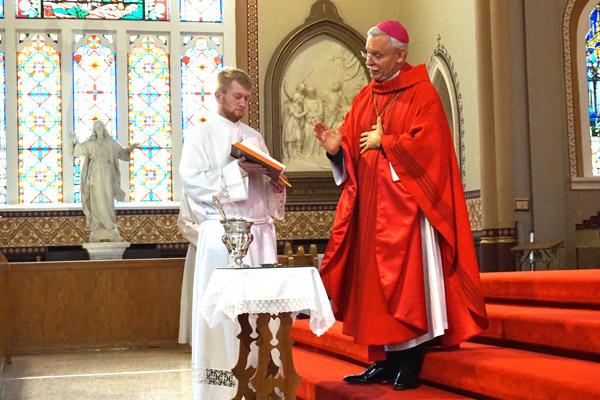 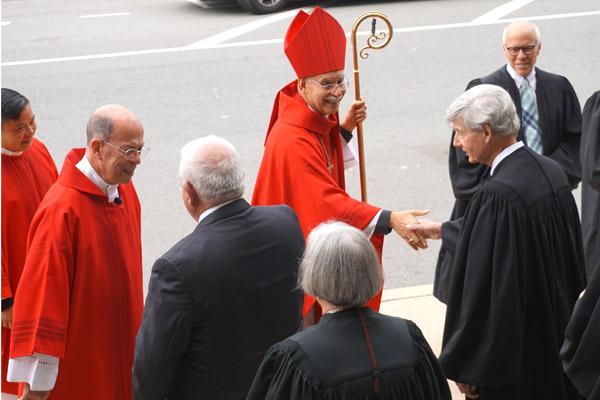 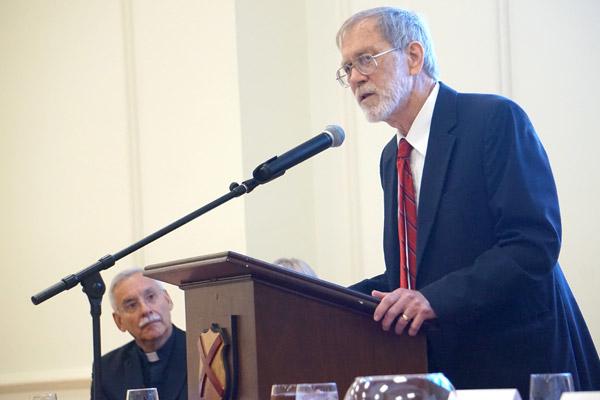 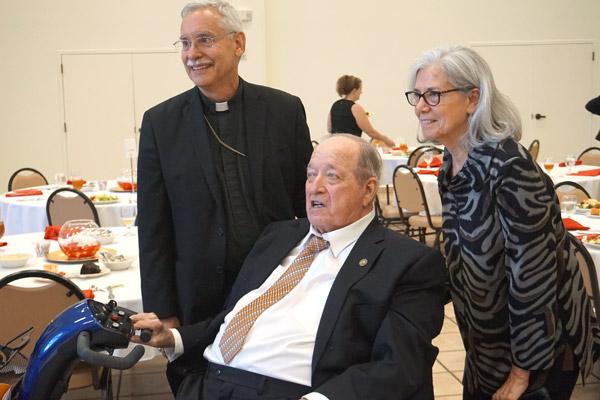 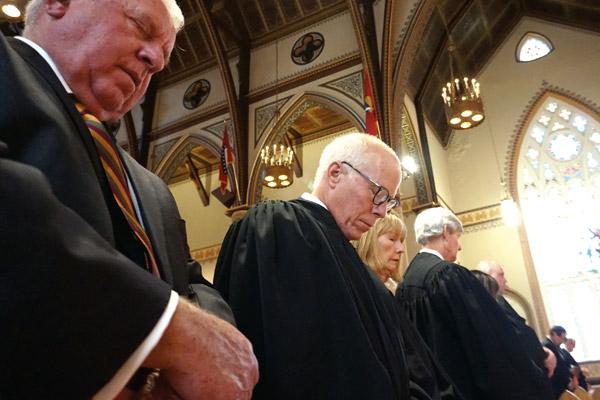 Aprille Hanson
Paul W. Keith, Arkansas Bar Association president-elect (left), and judges Milas “Butch” Hale and Rita Gruber bow their heads in prayer during the 25th annual Red Mass sponsored by the St. Thomas More Society Oct. 4 at the Cathedral of St. Andrew in Little Rock. Bishop Anthony B. Taylor celebrated the Mass, which was followed by a luncheon at which attorney Charles Baker and U.S. District Judge Leon Holmes were honored.

Aprille Hanson
Paul W. Keith, Arkansas Bar Association president-elect (left), and judges Milas “Butch” Hale and Rita Gruber bow their heads in prayer during the 25th annual Red Mass sponsored by the St. Thomas More Society Oct. 4 at the Cathedral of St. Andrew in Little Rock. Bishop Anthony B. Taylor celebrated the Mass, which was followed by a luncheon at which attorney Charles Baker and U.S. District Judge Leon Holmes were honored.

Bishop Anthony B. Taylor reminded legal and political figures attending the annual Red Mass of the importance of the yoke, the law as it was referred to in the Bible, and to be guided by the Holy Spirit, “yoked above all to the Lord.”

“True to the laws of our land but exercised in a way that is true also to that higher law, never losing sight of the humanity of the person you are dealing with, always remembering that human laws are at the service of truth and goodness and so need to be applied in a human way,” he said.

The 25th annual Red Mass and luncheon was held Oct. 4 at the Cathedral of St. Andrew. Hosted by the St. Thomas More Society, the Mass is meant to ask for guidance from the Holy Spirit for those in law and public service. Attorney Charles Baker, a longtime parishioner of Our Lady of the Holy Souls Church in Little Rock, was awarded the annual St. Thomas More award.

The luncheon’s keynote speaker, U.S. District Judge Leon Holmes, was also honored with a surprise second St. Thomas More award for his contributions to law upon his retirement Sept. 30.

“As Christian lawyers and judges, we can do our part to address the crisis in the Church by following St. Thomas More.” Judge Leon Holmes

In 2018, the society opened its membership to Catholics who have a variety of legal or political careers and Catholic citizens who have an interest in St. Thomas More. Society president Shawn Johnson said the society has about 200 members.

Bishop Anthony B. Taylor was the celebrant, along with concelebrants Father Greg Luyet, diocesan judicial vicar and chaplain for the society, Father Jack Vu, rector of the Cathedral, Father Aby Abraham, IMS, associate pastor of the Cathedral, and Msgr. Francis I. Malone, diocesan chancellor for ecclesial affairs and adjutant judicial vicar. Also serving were Deacons Bud Bryant of Pine Bluff and Matthew Glover, diocesan chancellor for canonical affairs, who both have civil law degrees.

In his homily, Bishop Taylor emphasized that on the feast of St. Francis of Assisi, the saint reminds people of the “human dimension of justice.”

“And while it is true that no human law and no human legal system is perfect, we should remember that beyond a certain point, unjust laws lose their binding force. Legislation must be at the service of truth and goodness, such that in extreme cases of injustice we are obligated to disobey such laws or at least find a way around them,” Bishop Taylor said. “We saw that in the civil disobedience that was part of the struggle to shake off the yoke of extremely unjust Jim Crow Laws in the struggle for civil rights.”

At the end of Mass, Bishop Taylor blessed the St. Thomas More pins, designed in 2017 by liturgical artist George Hoelzeman, for new members.

Frank B. Sewall, an insurance attorney and last year’s award recipient, introduced Baker, detailing his 11 years as a U.S. Bankruptcy Judge, his work with Rose Law Firm since 1984 and his dedication to his parish. Throughout the years, Baker has been active in Men’s Club, the Knights of Columbus, taught religious education and was a eucharistic minister to the sick.

“Like Thomas More, Charlie has deep love for his family. When he’s asked about his proudest accomplishments in life, Charlie immediately says his five successful Catholic grown children,” along with his wife Nancy and his grandchildren, Sewall said.

Baker told Arkansas Catholic, “I just appreciate the recognition my fellow lawyers gave me and my fellow Catholics. I’ve tried to do, as a lawyer and judge, what the good Lord wanted me to do.”

Holmes’ speech focused on the storied life of St. Thomas More, delving beyond his work and martyrdom into his personal faith and the lessons that can still be learned from his example.

“Here’s what I misunderstood: I had assumed that Thomas More was a saint because he was a martyr. What I discovered in studying his life is that he was able to be a martyr because he had already become a saint,” he said.

Holmes was appointed to the U.S. District Court for the Eastern District of Arkansas by President George W. Bush and confirmed in 2004. Holmes and his wife Susan attend Our Lady of Good Counsel Church in Little Rock. He chronicled his conversion to Catholicism in the 2016 book “The Cross My Only Hope.”

Lisa Cox, his legal secretary for 19 years who retired along with him, said, “Working for him made me a better person. He’s a wonderful man, loves his family. He’s always approachable, kind, a brilliant legal mind.”

Glover, who previously clerked for Holmes, introduced him as the keynote speaker, likening the judge, who earned the respect and admiration of his peers regardless of partisan lines, to St. Francis of Assisi in his approachability and compassion.

Holmes explained that while the crises in the Catholic Church, including sexual abuse, people leaving the faith and Catholics not believing in key tenets of the faith, have been described by some as a “crisis of saints,” it’s a misleading concept.

“The crisis of the Church is a crisis of being conformed to the world, of not being transformed by the renewal of our minds. It is a crisis of the Church as a whole, from top to bottom, clerics and laity,” he said. “As Christian lawyers and judges, we can do our part to address the crisis in the Church by following St. Thomas More” and the characteristics of his life, describing him as a man of the Bible, Church, prayer, fasting, penance and self-denial, for the poor, of faith and love for his persecutors.

“If we pray for and cooperate with the grace to imitate Thomas More in these seven ways, we will not be conformed to this world. Instead, we will be transformed by the renewal of our minds, and we will prove what is the will of God, what is good and acceptable and perfect.”