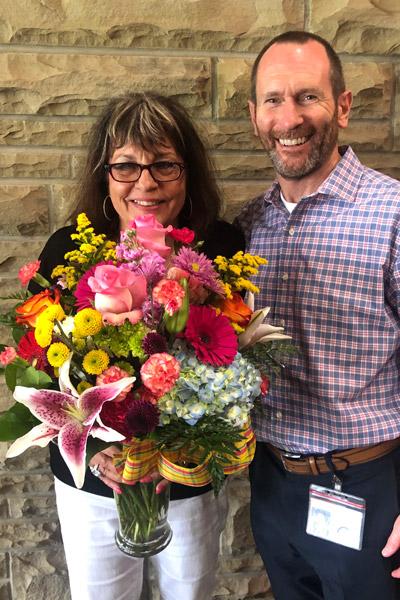 When Lou Trusty walked into Subiaco Academy in 1965 at just 17 years old, she was charting new territory. She took the helm as the academy’s first secretary during a time when both lay people and women were scarce.

“I thought, ‘Well, I’ll give it a shot, I’ll give it a try.’ All of a sudden many things get put on your plate. It’s been a wonderful experience, it’s been rewarding,” she said.

Though Trusty, 71, left for a handful of years in the late 1990s, this year she’s celebrating 50 years of service at the school.

“I consider myself kind of a behind-the-scenes girl. Try to keep a lot of things on track, along with a lot of other people. That whole thing ‘it takes a village,’ yes it does,” she said.

Born and raised in Subiaco, she attended St. Benedict Church, initially planning on going to college.

“Ladies weren’t pushed to go to college. You either became a secretary, got married, went into nursing,” Trusty said. After she graduated from St. Scholastica Academy in Fort Smith, she was hired.

“I never told the students my age because I was their age and some were older. Yeah, it was something,” she laughed, but added she didn’t dwell too much on her age. “I never even thought about it. I just did my job.”

Trusty has worked for 13 headmasters and experienced a technological revolution.

“Computers have certainly been nice. For years everything was done by hand — all your report cards, transcripts, correspondence on those terrible Gestetner machines, big old copy machines. You had to type it on a stencil … everything was by mail. It was a lot,” she said.

Today, Trusty is the administrative assistant and registrar, who corresponds with parents, takes care of transcript requests, student records and assists the headmaster, assistant headmaster and the academic dean. She has two children and five grandchildren. Her husband Mark Trusty, of 47 years, died last year.

Feeling some burn out, she left for a handful of years and came back when asked in 2003. Trusty said “it’s just a spiritually fulfilling place to work.”

“I just missed the camaraderie and the family-type atmosphere here … You can’t find that everywhere,” she said.

Dr. David Wright, who was hired as headmaster last year, said Trusty has been through the “good and the bad and the ugly” throughout her tenure, helping so many with her years of experience.

“Lou brings a lot to the table. She has just had such a direct impact on so many people, both the students that have gone through here during her time” and all the staff, Wright said, adding she has been a “big help and benefit for me; just her wealth of knowledge and kind of the thought processes around institutional history and not having to kind of start from square one. I leaned on Lou an enormous amount and still do.”

Trusty was honored by the Catholic Schools Office Sept. 27 during Educators Professional Day in Little Rock although she was not able to attend.