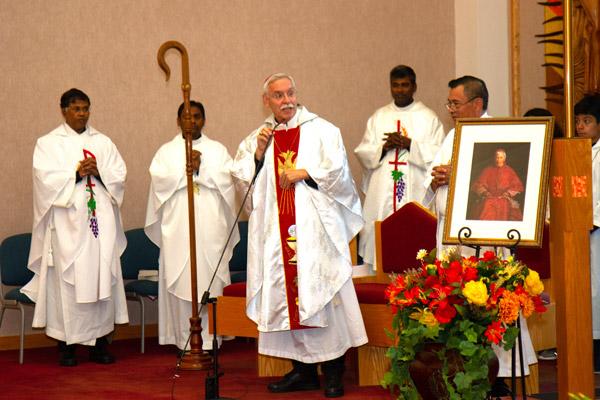 The canonization of St. John Henry Newman Oct. 13 is more than adding another saint to the Church. For Catholic students at Arkansas State University and around the world, he’s a saint to model for his courage and search for the truth.

“He’s the perfect example especially here at Arkansas State,” said Brandon Weisenfels, Catholic campus ministry director at St. John Newman University Parish, who explained out of the roughly 14,000 students, “There’s 200 to 300 that are Catholic. Ninety percent of them are Baptist. So he’s a living example, like the students who are trying to evangelize other students on the campus, he’s a living example of the truth … even though it’s not popular to be Baptist to convert to Catholicism, he’s the example of why we should.”

A reception followed the Mass in celebration of the saint. The parish joined college student centers around the country marking the canonization, including Newman University in Wichita, Kan., which celebrated events throughout the week, including outdoor adoration and watching the canonization on a live feed from Rome. Several Diocese of Little Rock seminarians received or will receive their degrees from Newman University.

The Jonesboro parish has about 150 attend the 5:30 p.m. Mass on Sunday, about half students, with others including university staff, professors and adults in the community. The current building was dedicated in 1992, referred to then as the Catholic Newman Center. At the ministry’s request to Bishop Andrew J. McDonald, it was renamed Blessed John Newman, though he was not beatified until 2010.

But the parish has had a way of moving toward what’s next, including the latest evangelization efforts that happen to coincide with the canonization of a saint who went through his own journey of conversion.

St. John Henry Newman, born in London on Feb. 21, 1801, was an Anglican priest, scholar, writer and philosopher and an academic at the evangelical Oxford University. At 44 years old, he converted to Catholicism. He was named a cardinal in 1879.

Father Francis Madanu, administrator of the parish who concelebrated the Oct. 13 Mass, explained St. John Henry Newman was “inspired by Catholic teachings” and “he wants the students to know the truth; he found the truth.”

“They are really strong in their faith,” Father Madanu said of the students at the parish. “They are seeking something more which can really give them happiness.”

According to the Newman Connection, a national nonprofit promoting unified structure to Catholic campus ministries, there are more than 2,000 Newman centers throughout the United States.

The Jonesboro parish has not formally studied the life of St. Henry John Newman, but Weisenfels said following the canonization, it’s on the ministry’s to-do list. In the fall, the parish partnered with Evangelical Catholic, a non-profit that helps college ministries, to train seven student leaders with a 14-week program to be missionaries of their faith.

“It’s the model that Jesus used with the 12 disciples. They used it when they went out, he sent them in twos. When you see that one-on-one relationship building, evangelization just seems to flourish,” Weisenfels said, adding that St. John Henry Newman was an advocate for spreading the truth. “He was rooted in the faith … but he didn’t want people to be ignorant. He not only wanted to educate them to accept the truth, but he wanted them to defend the truth and know why they believe what they believe.”

Electrical engineering major Zachary Ridgeway, 22, a senior from Little Rock and student council president of the ministry, said he was “hyped” about altar serving at the Oct. 13 Mass and learning more about the canonization process. He is going through evangelization training, which he said ultimately ties in with the values held by St. John Newman.

“For college students, especially in the Bible Belt where we are right now in Arkansas, there’s a lot of different religions around Arkansas State, so I feel like Blessed John Newman about to be saint sets the groundwork of this is our faith and he (stood) firm in what he believed in … it’s a good idea for us college students to stand on what we believe,” Ridgeway said.