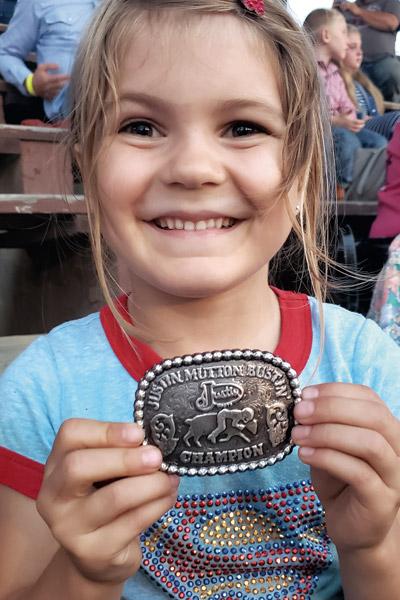 Courtesy Jena Selva
Vivienne Selva, 5, shows the belt buckle she received along with a trophy as mutton busting champion. The kindergartner from Our Lady of Holy Souls School in Little Rock won the contest at a Harrison rodeo in September.

Courtesy Jena Selva
Vivienne Selva, 5, shows the belt buckle she received along with a trophy as mutton busting champion. The kindergartner from Our Lady of Holy Souls School in Little Rock won the contest at a Harrison rodeo in September.

On a late Arkansas summer evening, a little buckaroo is getting ready for his eight-second ride. He’s decked out from head to heels in cowboy garb — even has the chaps — and he looks the part as his handlers hoist him astride his mount. It’s getting near the end of the draw for tonight’s competition and the little fella has a steep hill to climb, a mark of 88 out of 100, set by a previous competitor.

As little britches gets situated, the announcer imparts a taunting last-second exhortation.

“Come on now!” he thunders over the PA system. “Don’t let the girl beat you!”

The gate swings and a full-grown sheep lunges out of the chute with the little tyke on its back. The crowd cheers, but the kid’s a goner and he eats arena dirt moments into his ride. One by one, every other rider in the field suffers the same fate or fails to top the 88.

The girl — Vivienne Selva of Little Rock — had, in fact, beaten them all, besting a field of 40 mainly male hopefuls to win the mutton busting competition at September’s Harrison Roundup Club Rodeo in Harrison.

“(Mutton busting is) riding sheep,” Vivienne, 5, explained. “They have a rope around the neck that you can hold on if you want to sit up. You get on it and then it starts running.”

“It’s just her personality,” said her father, John Selva. “At the zoo, if the bear is sleeping right up against the glass, she wants to get right up to it. She’s not scared of that bear.”

So it was probably no surprise that when she saw the wild and wooly event last summer, Vivienne petitioned her parents to let her ride. But as her mom, Jena Selva, explained, they’d missed the sign-up deadline, leaving her to dream her rodeo dream for an entire year.

Jena said she never doubted her daughter would follow through on the request, nor was she concerned about her riding the beast.

On her maiden ride, Vivienne posted a good enough score to get her to the finals the following night. But her parents could see issues that were costing her points.

“The first night, she leaned over and put her arms around the sheep,” Jena said. “She held on, but her form wasn’t the best. So the next night I said, ‘Vivienne, do you want to win?’ She said, ‘Yeah.’ I said, ‘I think you’re going to have to ride sitting up if you want to win.’”

Sitting upright on a galloping animal with no way to steer or say “Whoa,” is no easy feat, but it was just the kind of strategy to land Vivienne in the money. As word got around, the whole family chimed in with helpful tips.

“She got on a bike without training wheels and took off before she was 5,” John said. “So, I told her it’s like riding a bike except you don’t have to pedal. When you feel like you’re going this way just lean the other way. She held her balance.”

“There’s a rope that goes around the sheep’s belly and my brother told her how to hold onto it so she’d be stronger,” Jena said. “She did and I said, ‘If you feel really steady and you feel comfortable then you need to throw your arm up.’”

Vivienne Selva’s individuality was on full display on her big night. The pint-sized cowgirl was unmistakable in her bright pink boots, Hello Kitty T-shirt and a bicycle helmet shaped like a unicorn. And when the gate swung open, she gave the fans what they came for, sitting rock solid and upright as her sheep tore down the length of the arena.

And just to make sure the judges knew who they were dealing with, at about the three-quarter mark, she let go with one arm and waved to the crowd, a flourish that brought down the house.

“One (ride) was for practice and one was for showing the people,” Vivienne said nonchalantly. “They cheered. It made me feel good.”

Vivienne got a big shiny belt buckle and a trophy as tall as she is for her effort, which she brought to show and tell at school recently. It’s an accomplishment unique among her classmates and her final ride the stuff of local lore.

“We went back up there (to Harrison) the following weekend,” John said. “We’re going to the Home Depot to get some stuff for her grandmother and we’re in line checking out Friday night. The girl checking us out was wearing some pretty nice cowboy boots.”