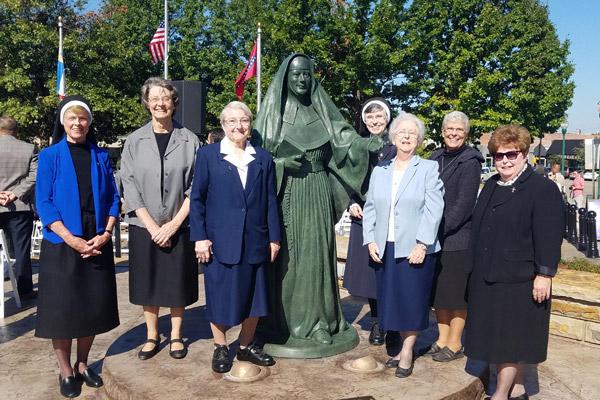 Read about more Catholic figures with historical connections to Arkansas:

FORT SMITH — Out the front door of Immaculate Conception Church sits a new park highlighting the contributions of a Fort Smith sister.

Gateway Park, a community-funded project of 64.6 Downtown, was dedicated Oct. 17. The park, at the intersection of Rogers and Garrison avenues, highlights the contributions of three residents who were instrumental in bringing education, health care and the rule of law to the Arkansas River valley.

A 7-foot bronze statue of Judge Isaac C. Parker, shown reading a law book, is seated at the park entrance. Parker, known as “the Hanging Judge,” tried 13,490 cases, convicted more than 8,500 defendants and sentenced 160 people to death in his 20-year judicial career, from 1875-1896. In actuality, however, he was a principled man who lived a life of faith in action and converted to Catholicism, his wife’s faith, on his deathbed.

“Judge Parker got a bad rap,” retired Sebastian County Circuit Judge Jim Spears said. “He was a strict judge, but much more than that. He wanted to rule out lawlessness so the Indians would feel safe because their tribal courts couldn’t enforce criminal law against white people.”

Parker favored the abolition of capital punishment but was required to sentence convicts to death for serious offenses, such as murder and rape.

“He was very vocal about that,” Spears added, “and is known for his quote, ‘It’s not the severity of punishment that deters crime nowadays but the certainty of it.’”

A 6-foot bronze statue of Mother Mary Teresa Farrell, a Sister of Mercy, faces the church on the Garrison Avenue side of the park.

“If you look at her statue she has one foot out as if she is getting ready to walk. In the 19th century most Irish orders were contemplative, but the Sisters of Mercy were known as the walking nuns because they were the only ones who went out and met the people,” Sister Jolitta Konecny, RSM said.

In 1851, Bishop Andrew J. Byrne traveled to Naas, Ireland, to find sisters who would minister to Catholics in Arkansas and the Cherokee and Choctaw nations in Oklahoma. Mother Mary Teresa set forth with four other sisters and five postulants and was assigned to Fort Smith, where she purchased Col. Zachary Taylor’s home, now called St. Anne’s building, and opened a co-ed grade school and a girls’ high school.

“The school soon became a combination orphanage/school because so many fathers died during the Civil War,” Sister Jolitta said. “Sisters raised chickens and cows, planted gardens, and foraged for berries to feed the children. Fort Smith was so close to the battlefront that they kept the children inside all day to protect them from the shooting. One of the hardest things for them was that they were all from Ireland and couldn’t get any tea.”

Although all the sisters were school teachers, they soon realized they would have to serve as nurses for the wounded and dying Union and Confederate soldiers.

“With no formal training and limited supplies, the most they could do was give them a place to rest and decent food, but those makeshift hospitals marked the start of Mercy’s healthcare mission in Fort Smith,” Sister Jolitta said.

After the war, Mother Mary Teresa sent two sisters to Chicago and two sisters to Philadelphia to study nursing. They returned with a professor who established a nursing school in Arkansas. She also made several trips back to Ireland to recruit more sisters for Arkansas’ growing education and health care ministries.

“Nothing was too challenging for her,” Sister Jolitta said. “Her sisters also started homebound and prison ministries, working with Judge Parker, who had a close friendship with them.”

The third sculpture, next to Rogers Avenue, depicts John Carnall, an early leader in the Fort Smith school system.

“The new park is being donated to the City of Fort Smith, to become a gathering place for residents and visitors alike to learn more about these contributions these three community leaders made in the late 1800s,” John McIntosh, a production and development leader for 64.6 Downtown, said.

“We’re very proud of the fact that the sisters are getting this recognition for the work they did in the early days,” Sister Jolitta said, “especially during the Civil War.”

Read about more Catholic figures with historical connections to Arkansas: