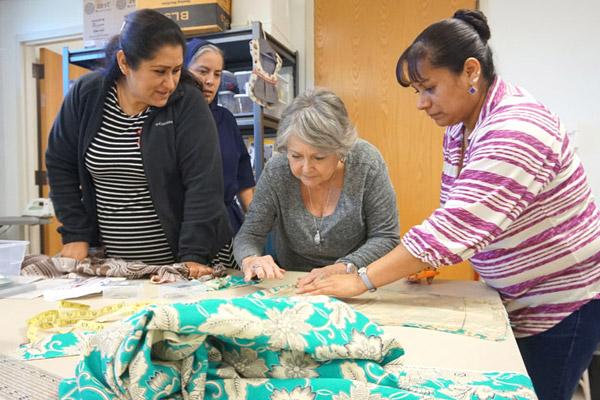 • Bring the sewing program to your parish by contacting Betty Jo King at mission@ctklr.org.

Read more about CTK's new in-state mission and about other sewing programs:

Carefully following her marked measurements, Caty Flores guided the scissors in a semi-circle of pink fabric. With a little thread, stitching and love, it will soon be a dress for one of her four daughters.

“Everything I have learned so far has new techniques of how to make it better,” Flores said through translator and sewing program team leader Isabel Adams, who added, “This is very hard to make,” emphasizing all the different skills that go into one dress.

Flores is one of 11 women at St. Theresa Church in Little Rock who are part of the first sewing program, using a bilingual curriculum, created primarily by Sherron Shroyer, who had traveled to Honduras for years with Christ the King Church in Little Rock. Adams helped translate the program into Spanish.

When the parish mission trip in January 2018 was canceled and the CTK’s Honduras mission itself stopped after more than 20 years in February 2019, the team was not able to debut the program.

“I felt like we could try it out here in our own state and just make a few modifications,” said Betty Jo King, mission director for Christ the King.

Shroyer, creative director of the sewing program, used her 58 years of sewing experience to create the curriculum.

“Sewing has enriched my life so much I wanted to share it,” she said. “… These ladies are so enthused, so excited to be here and are feeding that back to us.”

Father Mark Wood, pastor at St. Theresa, thought his parish would be a good fit. When Sister Iliana Aponte, DC, came to the parish in February, she had the idea of starting a sewing program, but did not know how to sew.

“To empower women because I know some of them are in their house, in the kitchen, many have stuff with the kids and care with the husband. I think they need something,” to do creatively, Sister Iliana said. “… I think it’s God’s providence.”

There are 11 students and there’s a waiting list for the next program, starting in January. The team leaders, assistants and other volunteers, six from CTK, four from St. Theresa and one from St. Edward Church in Little Rock, met to modify the program, which is about 36 hours, or 12 classes. They open with prayer, meeting each Wednesday from 9 a.m. to noon in a former storage room.

“For me, everything is good because some ladies came just to learn something,” Lopez said.

The skill levels of students vary, from experienced sewers like Flores to someone who has never sewed before, like Elsa Aguilar.

“I wanted to learn, I wanted to do things,” Aguilar said through a translator, adding her favorite project was a pillow.

Less than two months in, students have already made patchwork pillows, crossover bags, rosary cases, hair “scrunchies” and cloth grocery bags. Some projects are meant to be kept and others will benefit the church, including hospitality vests for volunteers.

King said the most rewarding part of the group is building community.

“When you work side by side with people you get to know them, you learn more about each other’s strengths,” King said.

• Bring the sewing program to your parish by contacting Betty Jo King at mission@ctklr.org.

Read more about CTK's new in-state mission and about other sewing programs: