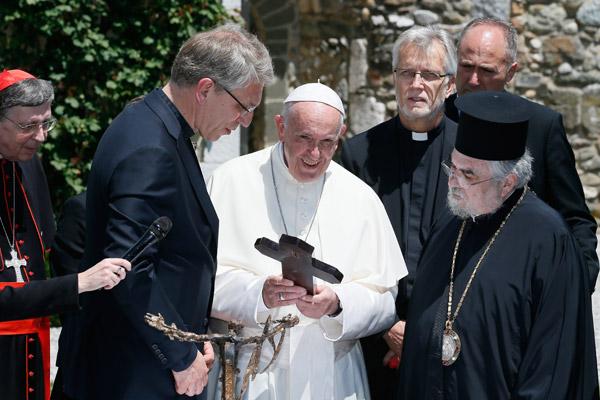 VATICAN CITY -- Members of the Synod of Bishops for the Amazon asked that women be given leadership roles in the Catholic Church, although they stopped short of calling for women deacons.

WICHITA FALLS, Texas (CNS) -- By annulling an Obama administration requirement that doctors perform gender transition procedures or treatments, as well as abortions, a federal judge in Texas has upheld the conscience rights of medical professionals across the nation, said a lawyer for plaintiffs in the case.

Consensus growing on what ‘church’ means to Christians

VATICAN CITY -- Working for Christian unity and engaging in formal theological dialogues to promote it obviously raises questions about what the nature and mission of the church is.

HONG KONG -- Weeks after the first anniversary of the deal between the Vatican and the People’s Republic of China on the appointment of bishops — the first formal agreement between the two countries since the 1950s — Beijing promulgated a fresh batch of regulations governing places of worship.

VATICAN CITY -- Most of the proposals of the Synod of Bishops for the Amazon, including the idea of ordaining some married men, are deliberately specific suggestions that would apply only to the Amazon region, said Bishop Robert W. McElroy of San Diego.

There are many times in life when we feel weary as Christians. (Understanding our Church, Seeds of Faith)

What is your favorite miracle Jesus performed?

“Jesus heals the paralyzed man; this is a very well-known miracle in which our Lord cleanses a man physically and spiritually knowing that he would be judged for this. The man whom Christ healed had ...” (Youthspeak, Seeds of Faith)

Grandma shares her secrets to living to 90 years old

It’s become a four-generation tradition to head south of the cities and take in a small-town celebration of fall. Our route winds between soaring bluffs and a shimmering lake. It feels like a narrow passageway, a tunnel back in time.  (Columns)

A few days ago, someone asked me in passing whether the “big meeting in Rome” -- referring to the Synod of Bishops for the Amazon -- would allow priests to marry. He, like many Americans, takes it for granted that the synod is a referendum on priestly celibacy. I am convinced it isn’t, but it is nevertheless a good moment to ask why, in the 21st century, we have celibacy in the first place. What is its enduring value? (Guest Commentary)