With Food Loops, food waste has a future outside of landfill 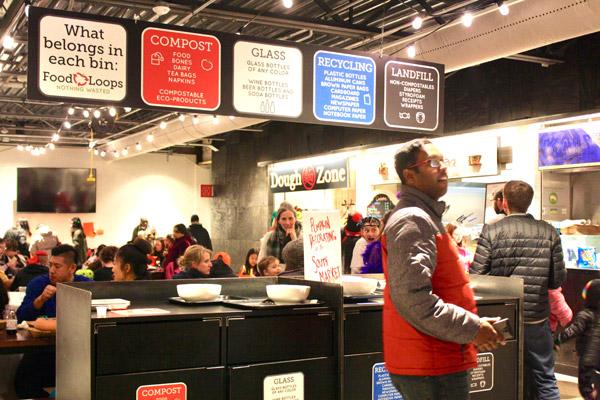 Alesia Schaefer
Food Loops’ four-stream recycling and compost station is prominently positioned at the 8th Street Market in Bentonville Oct. 31. Patrons have become accustomed to sorting their trash and waste after meals.

Alesia Schaefer
Food Loops’ four-stream recycling and compost station is prominently positioned at the 8th Street Market in Bentonville Oct. 31. Patrons have become accustomed to sorting their trash and waste after meals.

Read more about conservation efforts throughout Arkansas and beyond:

Quality of life and livelihood on the organic family farm (April 25, 2016)

Pope Francis, “Laudato Si’, on Care for Our Common Home”

At one time, it was an admonishment to clean your plate. But, for Food Loops, an up-and-coming company based in Rogers, it’s more than a motto, it’s a mission.

Food Loops’ goal is to empower commercial businesses, grocers, restaurants and schools with the idea of “nothing wasted.” The innovative company has a three-pronged mission: reduce food and product waste, sell eco-friendly paper and plastic compostable products and demonstrate how to turn any event into a zero-waste event.

Going beyond just recycling, Food Loops also proposes to close the food loop by taking food waste and producing nutrient-rich compost for local growers and residents as an alternative to the petroleum and chemical-based fertilizers on the market.

Tom Rohr, founder of Food Loops, said it’s an idea whose time has come. Rohr should know, because in the past two years that his company has been operating, he has had Fortune 500 corporations based in northwest Arkansas such as Tyson, Wal-Mart and Sam’s Club call on Food Loops to help reduce waste at events or to demonstrate how to be less wasteful and more mindful of what is considered trash.

If this sounds like a big idea, it is. According to in-depth studies done by the city of Fayetteville, 80,000 tons of trash goes into area landfills annually, and about half of that number is commercial food waste, according to Rohr. Food Loops, operating in both Benton and Washington counties, has a goal to cut that number in half and create about 30 million pounds of fertilizer.

But behind every big idea is a lot of research. Rohr, a parishioner at St. Vincent de Paul Church in Rogers, began in 2017 by listening to podcasts, talking to horticulturists at the University of Arkansas, visiting the landfills and recycling centers and talking to a lot of people about food waste and where it was going.

Understanding the cycle of food waste and trash, though, is more of a science than one might think.

“When I learned that 30 percent of food that is produced ends up in the landfill, I realized what a waste that is,” Rohr said. “That is really where the idea of Food Loops came about.”

Along the way, Rohr said, in picking up the food waste, there was a realization that post-meal food was a problem. The institutions with the most food waste are often schools, and the University of Arkansas was among them.

“They introduced us to compostable products, such as plates, cups and utensils, all made from wheat, sugar and corn. That solved a sorting problem for us,” he said. “We contacted Eco-Products and now we distribute their products. So compostable products can be disposed of with the food waste.”

Rohr had always wanted to start his own business and he felt the time was right, so he contacted Michael Kraus, another person interested in sustainability, and with that had his first employee.

Kraus, a fellow parishioner at St. Vincent de Paul Church, has had a passion and interest in stewardship for the environment since high school. He credits working and living at Bethlehem Farms, a Catholic community in Appalachia, as being a revelatory experience for him.

“We did not just talk about caring for our resources, we did it by composting, growing our own food and preserving our resources of water and energy,” Kraus said.

Kraus, who now works as project manager at Food Loops, said, “Food waste in the landfill will be sealed and unused forever. If we compost food waste, it can help us grow healthier food or replace chemical fertilizers.”

Just this past month, the St. Vincent de Paul Parish festival called on Food Loops to assist with the waste at the festival. Rohr said, as with most events, single-use products that are thrown away were formerly used.

Food Loops intends to educate citizens, too, by offering a residential food waste bucket swap program. Homeowners can purchase a food waste, five-gallon bucket to dispose of their food waste and other compostable products at home. Once the bucket is full, it can be swapped out for a clean bucket at local Farmers Markets or pick-up points.

Cindy Maas, a graduate of the Brightwater Culinary School and Center for the Study of Food in Bentonville, helps promote the compostable product market. She helped organize the 8th Street Market, a food hub near downtown Bentonville, to become a four-stream color coded system, where all waste is sorted into four containers.

“Red is for compost — food waste and compostable products,” explained Maas, now manager of customer service, “blue is for recycling, such as aluminum and plastic bottles. White is for glass, both clear and colored. Black and gray is for landfill trash, items such as wrappers, diapers, paper plates, plastic forks and coffee cups.”

“This really is a simple solution,” she said, “It’s not rocket science. It’s pretty easy to follow and user friendly and can be done. Any little step that we can all collectively take can bring us toward that bigger goal of being zero waste.”

Read more about conservation efforts throughout Arkansas and beyond:

Quality of life and livelihood on the organic family farm (April 25, 2016)

Pope Francis, “Laudato Si’, on Care for Our Common Home”