Cassidy Wharton, born with Down syndrome, sees the positive in all things 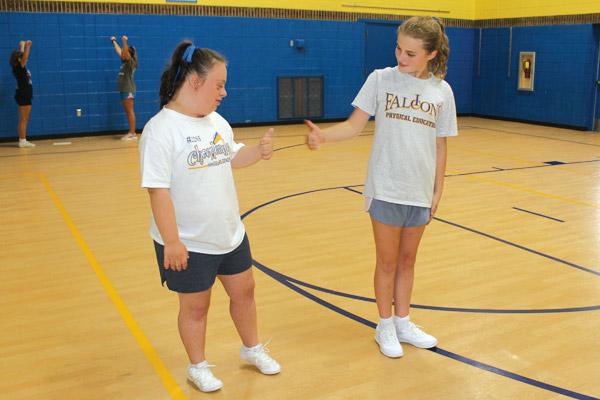 Read more about how people with disabilities are spreading joy in the faith in this special section:

Catholics with disabilities seek ways to participate fully in the life of the Church (July 14, 2018)

If there was money to be made in smiles, Cassidy Wharton would be a multi-millionaire.

The eighth-grader smiles at the sight of teachers, administrators, office staff, custodians, classmates, coaches, parents, visitors and clergy around Immaculate Conception Church and School in North Little Rock. Even meeting someone for the first time her face practically explodes into a genuine, joyful grin followed by an all-in, full-body hug.

“She is the purest of pure as far as her soul,” said Courtney Drake, Cassidy’s older sister. “She sees no color, no illness, no anything. To her it’s all sunshine and all things positive. I wish I could be more like her and see the world through her eyes; it would be a much happier place if we all did.”

Cassidy smiles throughout extra-curricular activities, too. She’s a ray of light on her dance team, the Falcon cheer squad and on the basketball and volleyball teams where she’s known for waving and blowing kisses to the crowd during games, including visiting fans.

“There was a game where she ducked and the ball went out of bounds at a crucial time. I was like, ‘Cassidy! What are you doing?!’” Drake said. “The other team was like, ‘What is that coach’s problem?’ I realized they didn’t know we were sisters, so I had to tell my principal, ‘If you get a phone call about a coach yelling at a special needs kid on the team, that was me.’”

The glow that follows Cassidy around is like glitter; it sticks to everyone and everything she touches and stays there for the rest of the day. She’s not perfect — no teenager is — but she is special in all the best kinds of ways.

Born with Down syndrome, Cassidy spent the first years of her educational life in public school across the street from I.C. where there were more resources for helping her learn. But the school maxed out at fifth grade, so a decision had to be made as to where she would go next.

Stacie wanted her daughter to experience Catholic education and attend school where members of her family had graduated and where at the time both she and her daughter Courtney were teachers. There was just one issue.

“To my knowledge, it’s never been done here before with someone with Down syndrome,” Stacie said. “I wasn’t really sure what her day would look like.”

Stacie broached the subject with school administrators to see what might be done to make Cassidy at home and productive at I.C.

“I said, ‘I just want to throw this out there. Obviously, she is not going to do the same curriculum as grade-age peers, but would you be willing to try it?’” Stacie said. “They were all for it, arms wide open and welcomed her in.”

The process was not without growing pains. Most teachers didn’t quite know how to act around Cassidy’s precocious side, which isn’t afraid to push the boundaries as far as she can.

“One of the things I told (teachers) is we have raised her the same way we’ve raised our other two kids. We expect her to follow the rules,” Stacie said. “Because Cassidy is very sweet, she has a way of wrapping you around her little finger to where you let her get away with things or give her some free passes on things maybe you shouldn’t. It is important that you hold her accountable.”

As teachers became more comfortable with this, they were better able to help students understand that to treat Cassidy with kid gloves was a form of setting her apart. Watching her interact with her teammates at a recent cheer practice attests to how far that relationship has come.

“She’s definitely funny; she’s a big bundle of fun, always there to help other people and be there for everyone,” said Sarah Beth Thomas, an eighth grader on the cheer team. “She does the talent show a lot; she loves to dance. She’s also not scared to tell you your place.”

“She always puts a smile on your face, she’s always got a positive environment around her. She’s inspiring and really fun.”

As you read this, the “lasts” of middle school are starting to pile up as the school term already approaches its halfway point. For the Wharton family, each grain running through the hourglass is another step toward departing the familiar for the unknown. The family would like to see her attend Mount St. Mary Academy next year, but change is not easy. Nothing worthwhile or enriching ever is.

Whatever the future holds, the reciprocal imprints Cassidy and I.C. School have left on one another are profound.

“Being around Cassidy has taught me you can’t really judge how someone is by the way they look,” said Ella Horn, an eighth grader and fellow cheerleader. “She’s so loving, so much more loving than a lot of people who don’t have a disability.”

“She loves everybody. She couldn’t ever be mean to anybody. She’ll make you smile without even trying.”

Read more about how people with disabilities are spreading joy in the faith in this special section:

Catholics with disabilities seek ways to participate fully in the life of the Church (July 14, 2018)