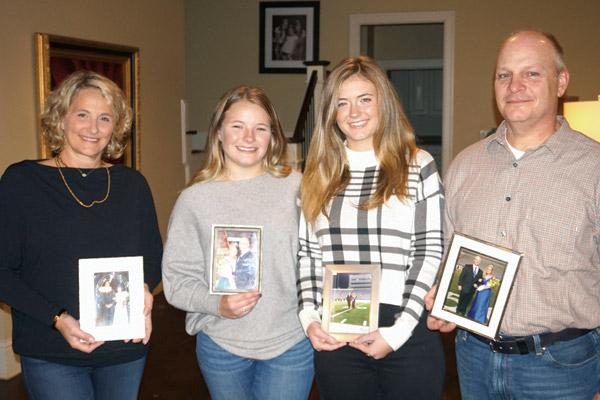 Four homecoming crowns in one family is impressive. So is a superhero-themed prom photo going viral. Read more about it here:

“I was literally mouthing the word ‘Lily,’” said middle sister Molly Kate Wewers, 20, when the announcer was ready to crown this year’s Catholic High School for Boys homecoming queen. Then the moment came: Lily Wewers.

“Then I jumped and screamed,” Molly Kate said.

Daughters Grace and Molly Kate, graduates from sister school Mount St. Mary Academy, were crowned Catholic High homecoming queens in 2014 and 2016, respectively. Grace, 22, is a freshman at William H. Bowen School of Law in Little Rock and Molly Kate is a junior accounting major at the University of Arkansas at Fayetteville.

“When she (Grace) was homecoming queen it was such a surprise, it was our first child at Mount. It was something we never expected having never been through the process before,” Julie Wewers said, later adding, “Then when Molly Kate’s year came, you don’t think lightning is going to strike twice, much less three times. So we weren’t expecting it at all again.”

When it comes to the Hollywood stereotype of a homecoming queen as the quintessential mean girl obsessed with popularity, the Wewers ladies break the mold.

“We’re kind of breaking that barrier just a little bit,” Lily said. “I had so many people come up to me afterwards and they were like, ‘I’m really glad that you got it because you’re the kind of person that wouldn’t go around bragging about it.’”

And they are hardly clones of each other. Grace is reserved, organized and shyer than her younger sisters.

Molly Kate is outgoing, but “I’m not much of a center of attention person” and her sarcastic sense of humor, “I get that from my dad.” Rain poured down for her homecoming, the first year the queen would be announced on the field that night, but it was clear skies when she took her crown.

And Grace explained Lily best: “Lily is just the most bubbly; you never know what’s going to come out of her mouth. She’s friends with everyone. She’s so sappy and so emotional,” with Lily adding, “I’m a lot less organized.”

And though homecoming was a “freezing” fall night, Lily said it “felt amazing.”

“There’s so many different people who vote for it, so it kind of feels like I have a lot of support from a lot of different people, which is really nice to kind of be affirmed in that way,” Lily said of students voting from Catholic High and Mount St. Mary. “And honestly, I was scared, just having those two to live up to is kind of a big task. They’re pretty great big sisters.”

But there was never any pressure from her family to carry on the legacy.

“This is one of the things we told Lily because we knew she’d feel a lot of pressure. It’s not the end-all, be-all of your high school career,” Molly Kate said. “It’s not something you should think about when you’re talking to people. … You just treat people the way you’re raised to treat them.”

Dr. Darin Wewers, 52, Catholic High Class of 1985, who was on the football team that won state that year, got to escort all three daughters during their homecoming ceremonies. Every year he attends the alumni dinner before homecoming and admits his fellow CHS brothers “kind of rib me every time.”

“Julie and I are obviously very proud of them not just because they were named homecoming queen,” he said. “That is more of kind of a validation as to how we’ve tried to raise them to be good students, good athletes, giving the best you can give, 100 percent, to whatever it is; school work, being a friend.”

Despite their differences, the overall meaning of being crowned homecoming queen is the same for all of them: kindness.

Four homecoming crowns in one family is impressive. So is a superhero-themed prom photo going viral. Read more about it here:

Catholic High senior signs on as a new seminarian