Bulldogs resume the march of a high school golf dynasty

Golf athletes at St. Joseph High School in Conway rack up wins on the greens 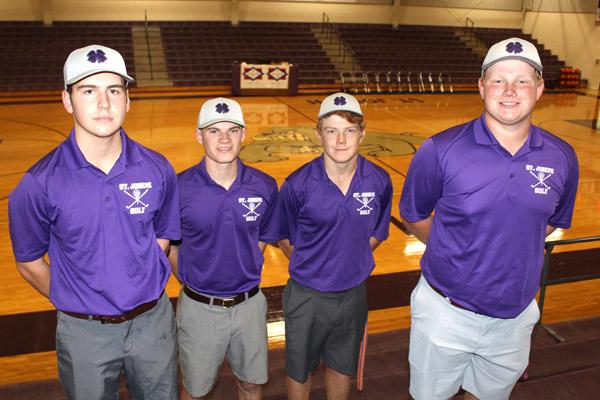 One stroll through the St. Joseph High School gymnasium in Conway is all it takes to understand this is a school that takes its athletics seriously. On every wall, the spoils of teams past set the mark for current and future Bulldogs and Lady Bulldogs in virtually every high school sport.

The school’s golf program holds more than its share of real estate among this accumulated excellence. Championship team photos peer down over multiple state titles, to say nothing of the district wins too numerous to mention.

Senior Timmy Coney is among the thousands of students enshrined here. As a four-year member of the golf team, he’s helped bring a few pieces of hardware to the collection, earning All-State honors in the process.

“My most memorable moment, I would say, would be my sophomore year when we were at state and we had no chance of coming in top five at all, but we came runner-up to BIC (Buffalo Island Central) who was a really good school,” he said.

There are so many state golf trophies here they can’t even reside in the same case. From 2000, when the Lady Bulldogs brought home the first of their eight state titles, to today, St. Joseph has struck golf gold 14 times between the two squads. In three of those years (2007, 2008 and 2010) both the boys and girls came home state champions.

In fact, between 2000 and 2010 at least one of the golf teams won the 2A state title in eight of the intervening years, a 73 percent winning percentage, thanks largely to the girls’ five-year streak between 2006 and 2010.

All of which makes the title dearth in the second decade of the 2000s such a stark gap in the school’s resume. The girls haven’t won state since their streak ended in 2010 and from 2011 to 2017, the boys won just once.

But over the past four years, something familiar has begun to build for the boys. After failing to make the top 10 in 2015, the Bulldogs placed a modest ninth in 2016, then jumped to second the following year. The squad eked out the 2018 state title by one stroke over cross-town rival Conway Christian.

Coney’s career spans the dying of the drought and the return to glory.

“When I was a freshman at state and I turned the corner on hole 9, I was two under,” he said. “I wound up making All State and also made top 10. That year, by far, I knew we were getting better. I knew we could do something.”

Given that the 2019 team — which placed third at state — only graduates one senior, things appear to be back to normal in one of the most dominant small-prep golf programs in Arkansas Activities Association history.

“One of the big strengths we had was we were going to be a young team, but we had players that had been playing in some summer tournaments and things,” said Mike Prall, the team’s second-year coach.

St. Joseph’s 2018 state title put a target on the Bulldogs’ back, and players admitted to feeling the pressure even as they breezed through the regular season.

“This past season was pretty fun. Just playing together, having a good time,” said Luke Bruich, a junior. “Last year we worked a lot harder (to win). This year we just had a lot more pressure on us.”

“A lot of (our success) had to do with Collin (Coney) coming up,” said Gus Longing, a junior. “We were really good when I was a freshman. We had me, Luke and Timmy. Once Collin came, it was like if we had four scores that good every match then nobody’s going to beat us.”

At state, teams were waiting for the defending champs, especially Conway Christian which had bogeyed late in 2018, handing St. Joseph their state title. This year it would be the Bulldogs’ turn to feel similar agony as a scorecard error ended their quest for a repeat.

“It’s one of those life lessons that you learn,” Prall said. “It will help us come back stronger for next season.  Hopefully we’ll get back to the state tournament next year and get that state title back.”

Ending the season on a technicality smarts more than losing on the course, and the missed opportunity is already smoldering in the returning golfers as fuel for another title run.

“Maumelle Charter is supposed to be in our district next year, so we get to play them pretty much every time,” Longing said. “It won’t be as nerve wracking; it won’t be as much pressure because we know them. We’ll lose Timmy, but we’ll be able to grow more and get to feel what this team can be like.”

“I’m giving myself a little time off right now and once spring break hits, I’ll start picking up the clubs again and start working,” said sophomore Collin Coney, Timmy’s younger brother. “It was pretty tough this year, but I do think it will pay off in the future. I just keep practicing and give it all I’ve got.”