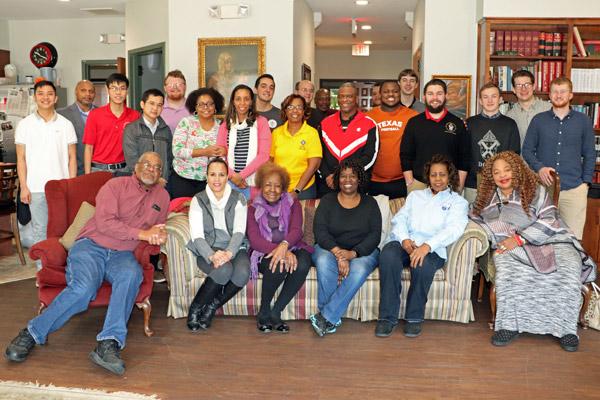 The Knights of Peter Claver Fr. John N. Labauve Council #224 and the Ladies Auxiliary of Peter Claver Fr. Michael Moody Court #224 from St. Bartholomew Church in Little Rock pose after attending Mass and providing brunch for the seminarians in the House of Formation Nov. 9. Bishop Anthony B. Taylor was ... (Photo)

The Central Arkansas Catholic Consolidated football program ended its inaugural season in style Nov 12. The squad, comprised of players from several area Catholic schools, is in its first season competing under the governance of the Arkansas Activities Association. The Firecrackers eighth-grade team took home ... (Sports Briefs)

Is it improper to say the rosary during Mass?

Q. I recite the rosary throughout the Mass. I pause for certain rituals like the consecration of the holy Eucharist and the prayers that the congregation recites together. I’ve been told, though, that it is not proper to pray the rosary during the Mass. (Question Corner, Seeds of Faith)

Change. It’s either welcomed or an uninvited guest. Either way, it’s a guest that knocks at our door the moment we are born, saunters in and occupies the guest room for the entirety of our lives. There are times when change shows up and she is the life of the party. Other times, we would like to show her the door and watch it slam behind her. (Columns)

A Pew Research Center study that was released last month has garnered a lot of coverage from both the secular and Catholic press. It found that people who describe themselves as atheist, agnostic or “nothing in particular” now represent 26 percent of the population. That number was just 17 percent 10 years ago. The study also shows that for the first time, less than half of Hispanics in the United States (47 percent) identify themselves as Catholics. (Guest Commentary)