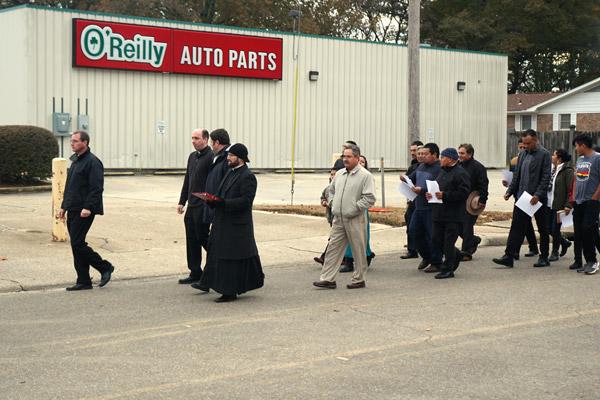 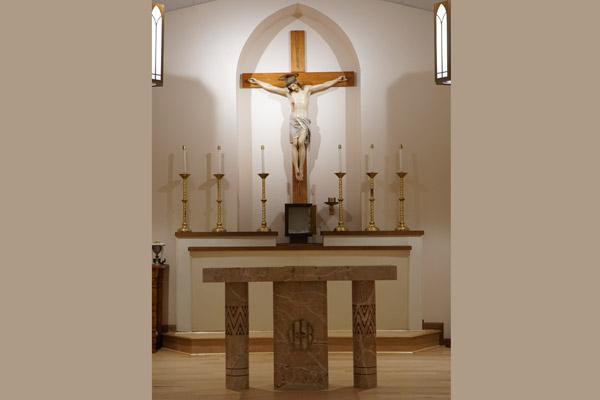 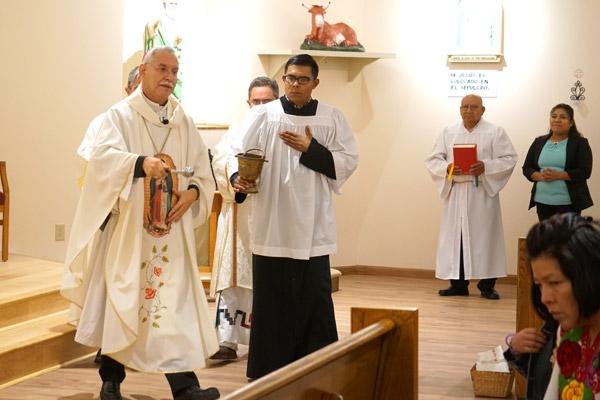 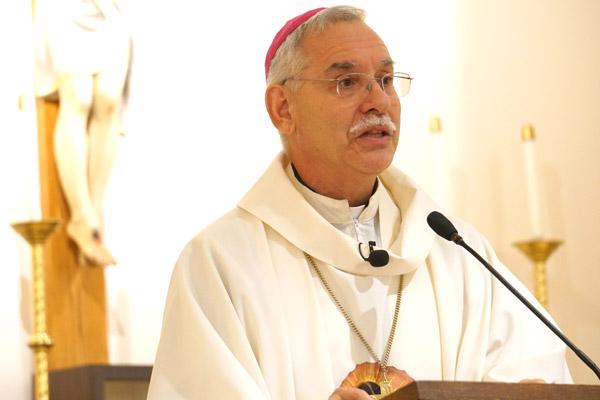 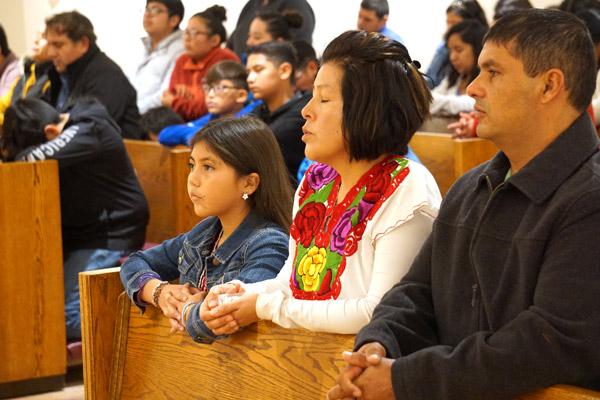 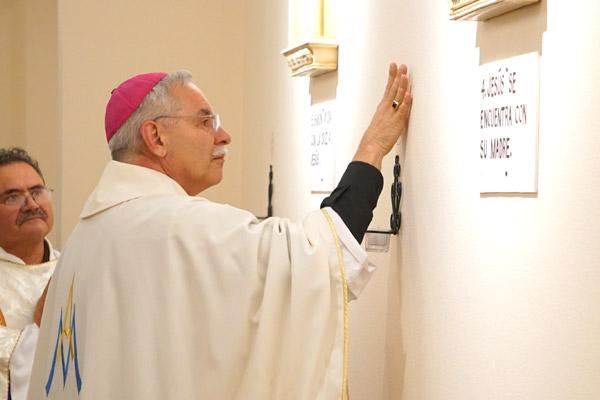 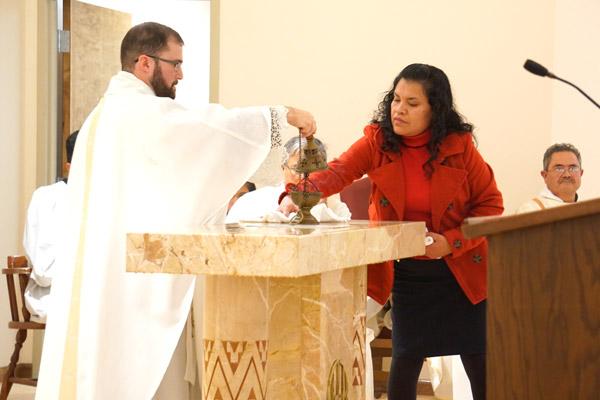 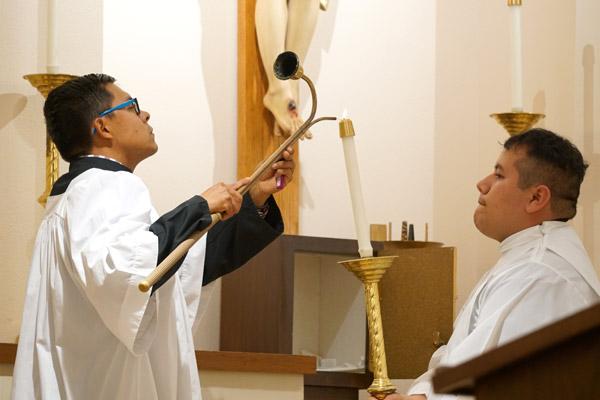 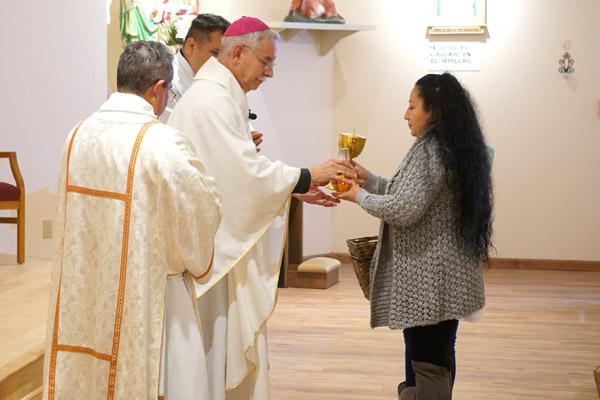 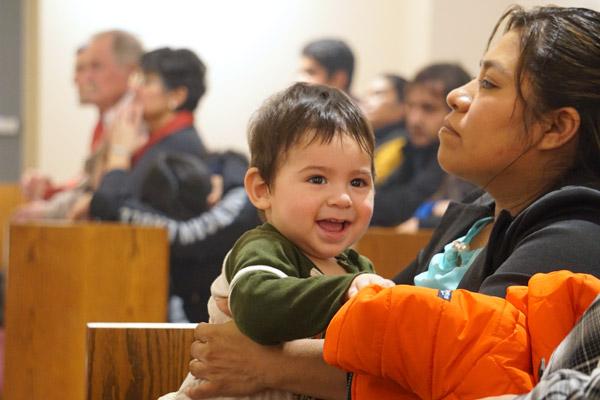 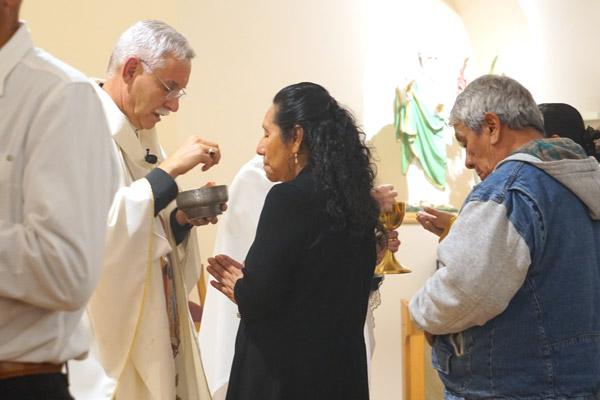 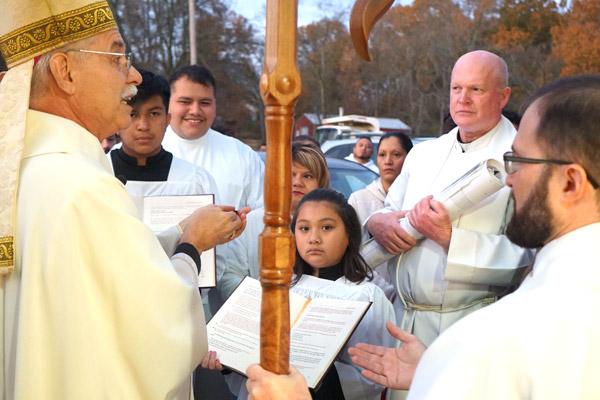 WARREN — The dedication of St. Luke Church in Warren Nov. 23 was a culmination of years of work from people around the diocese.

For the small community made up of Hispanic families in Bradley County, the boost in money and donated items made it possible for them to move into a larger facility with amenities they never had, such as classrooms and a parking lot.

While the parish has been raising money for 20 years to build or renovate a building to replace their 100-year-old sanctuary, the new diocesan mission initiative One Church and a $140,000 donation from Catholic Extension made it possible to move into their new building faster.

On Nov. 23 Bishop Anthony B. Taylor was joined by the pastor Father Eddie D’Almeida, former pastors, parishioners and donors to dedicate a former farmers’ co-op store, warehouse and mechanic’s shop into a church, along with seven classrooms and an office. Donations fell short of the parish being able to finish the back portion of the building for a parish hall.

The new church design harkens back to the old church, which was too small for the growing community and was deteriorating beyond repair. The Stations of the Cross, ambo, crucifix and tabernacle from the old church are now prominent in the new building. Niches in the shape of the Gothic arches of the old church house statues of Our Lady of Guadalupe and St. Luke. A shelf was added next to the St. Luke statue to showcase an ox statue, often associated with St. Luke as a symbol of sacrifice.

The altar was donated by St. Scholastica Monastery in Fort Smith and the pews, originally from St. Joseph Cathedral in Jefferson City, Mo., were cut down to fit the space. Little Rock parishes have chipped in too, including speakers from Our Lady of the Holy Souls Church and classroom desks and chairs from Christ the King School. The only amenity that is new inside the church are the pendant lights.

Three stained-glass windows from the old church — the Alpha and Omega, the Chi Rho and one with the papal keys — were removed from behind the altar of the former church. In the windowless new sanctuary, the windows will be framed and backlit. The Greek symbol windows will be placed in December behind the new altar. The papal keys window will find a new home in the confessional.

“There is a carryover architecturally with the niches,” the pastor said. “It tries to emulate the Gothic architecture of the old church. It will be nice to have the windows because it will echo the same architecture.”

To bridge the old and new, parishioners gathered at the old church before the dedication Mass for a prayer inside the empty church and processed together to the new church with their pastor and visiting priests.

Because the former church seated only 180, the Sunday night Mass always had people who were forced to stand outside the front doors or in the sacristy. The new church is nearly double the size, with seating for 350.

Father D’Almeida said the parishioners have not had much time to survey the new building and enjoy all its features.

“Construction has been behind schedule,” he said before the dedication. “We just moved a lot of items. We just got the lighting working this week. It has been a rush to get it ready. We have been running so much that it didn’t really hit us until the end of Mass (Nov. 17) that we are going to the new place this week.”

Once word spreads that the new church is open, Father D’Almeida is hopeful that Catholics who haven’t attended in a while or those who are lacking some of their sacraments might return.

“Hopefully, with more seating, a lot more people will be attending Mass and more opportunity for more people to contribute to the capital campaign,” he said.

“I talked to a friend of mine in Monticello,” she said. “She said she liked going to Mass in Warren but there wasn’t enough space. If we get there at 5 p.m. (for Mass) we likely can’t find a seat. When we have a holy day or Easter Sunday, you just have to stand outside.”

Rodriguez and her family moved to Warren from California in 1996 when there was only one Mass in English each week.

“It was very few people,” she said of when they moved to Warren. “There were very few Catholics here …  It’s been growing. It isn’t like a dream come true; it is a blessing from God.”

The dedication of a new church includes several special rituals, including anointing 12 points on the walls with sacred chrism and incensing and anointing the altar, lighting the candles and blessing the building and people with holy water. Before Mass, the architect Darrel Odom of Little Rock gave the architectural plans to the bishop and the bishop gave the keys to the building to the pastor.

“I have entrusted you, not just this building, to his care,” the bishop said in his homily.

The capital campaign for the $1.3 million renovation was first supported by the Spanish-speaking community that makes up St. Luke Church. The Diocese of Little Rock chose St. Luke Church to be the first One Church partner in 2018, donating nearly $150,000 from donors across the state. Catholic Extension donated another $140,000 to pay down the mortgage. The former church and separate rectory/parish hall will be sold by the diocese.

Father D’Almeida said parishioners and other donors have hopes that one day the parish hall can be finished and maybe even the large grassy area on the property could be developed into a soccer field.

“We are coming from a very, very small church and grounds,” the pastor said. “We are moving to a huge place. It is good (that)people have grand ideas. Right now we are worried about getting our feet on the ground and getting settled in.”