Benedictine women honored for serving Church, their order for 25 to 70 years in 2019 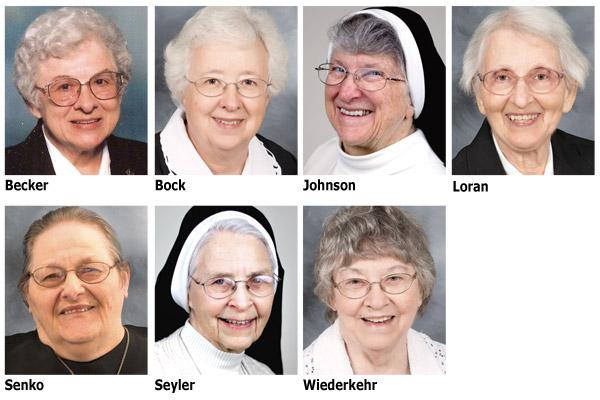 The 2018 collection for the Retirement Fund for Religious enabled the National Religious Retirement Office to distribute direct care assistance to 360 religious institutes, including two based in Arkansas.

In Little Rock, the Discalced Carmelite nuns received a grant for $23,390.58. At Subiaco Abbey, the monks were given a grant for $47,843.91 to care for their retired members.

Sister Audrey Becker made profession at St. Scholastica Monastery in Fort Smith on June 24, 1949. She was born in Barling and attended elementary school there with sisters from St. Scholastica as her teachers. She earned a bachelor’s degree in education from Quincy College in Illinois in 1964 and a master’s degree in religious education from Loyola University in Chicago in 1973. After 40 years of teaching in Arkansas, Texas and Missouri, she assisted the director of St. Scholastica Retreat Center until 2001 when she was appointed secretary of the monastery.

After serious injuries from a car accident, she retired from active ministry in 2016.

Sister Andrea Loran followed her sister, Sister Martha, to St. Scholastica Monastery, making profession on June 24, 1949. She was born in Rhineland, Texas, and attended elementary school taught by Benedictine sisters from Jonesboro. Three years after graduating from Rhineland High School, she entered St. Scholastica. Sister Andrea used her culinary skills in several missions and monastery-sponsored institutions. After working in the kitchen at the monastery 1968-1988, she worked for nine years at St. Joseph Home in North Little Rock. When the sisters left there in 1997, she was assigned to be a core member of Hesychia House of Prayer in New Blaine. Ill health led to her retirement from active ministry in 2017.

Sister Mary John Seyler, OSB, was raised in the Catholic community of Muenster, Texas. Having been taught by Benedictine sisters, she was inspired to answer the call to religious life in in 1947. She made first profession in 1949 and perpetual profession in 1953 at Holy Angels Convent in Jonesboro.

Sister Mary John taught at Blessed Sacrament School in Jonesboro, Our Lady of the Holy Souls in Little Rock and St. Maria Goretti School in Lake Arthur, La. She was both teacher and principal in Sacred Heart School in Muenster, Texas, and St. Paul School in Pocahontas. She also taught religious education at Our Lady of Lourdes Church in Erath, La. In 1981, she was elected prioress and served two terms in office. She then went back to teach at Sacred Heart School in Muenster for nine years before returning to the motherhouse to serve as the formation director for three years. She then began a new ministry in the Pastoral Care Department at St. Bernards, in which she visited patients and served as the director until 2017.

Sister currently serves as the community’s oblates director, a position she has held for 17 years.

Sister Macrina Wiederkehr is well known as an author and retreat director. She just published her tenth book, “The Flowing Grace of Now.” She was born in Altus and attended elementary school there, being taught by sisters from St. Scholastica. While she was attending St. Scholastica Academy, she entered the monastery and made profession on June 24, 1959. She received a bachelor’s degree in education from the University of Portland, Ore., and a master’s degree in religious education from St. Thomas University in Houston, Texas. For nine years, she taught in elementary schools in Arkansas, Oklahoma and Missouri, then served in religious education in parishes in Missouri. In 1976 she was appointed vocation director for the monastery and in 1980 became campus minister at the University of Arkansas in Fayetteville. Sister Macrina worked until 2018 in retreat ministry at St. Scholastica Retreat Center and elsewhere. She presently continues writing, directing retreats and serving as a spiritual guide.

Sister Barbara was born in Pilot Grove, Mo., and attended elementary school there with sisters from St. Scholastica as her teachers. While attending St. Scholastica Academy, she entered the monastery. Before becoming a charter member of the new foundation in Columbia, Sister Barbara was an elementary teacher and a music teacher in Arkansas and Texas for six years. Since transferring back to St. Scholastica’s, she has been a health care coordinator for sisters who need nursing care and accompanist for the community’s liturgical services.

Sister Jo Ann Senko was born in Slovak, Ark., and boarded during the week at Holy Rosary School in nearby Stuttgart so that she could attend a Catholic elementary school. After graduating from St. Scholastica Academy, she worked for four years for the newspaper in Stuttgart. In 1956 she entered St. Scholastica Monastery and made profession on June 24, 1959. Her first ministries included teaching, caring for the boys at St. Joseph Orphanage in North Little Rock and cooking at Subiaco Abbey. In 1972 Sister Jo Ann completed a degree in dietetics at the University of Arkansas in Fayetteville and worked as a registered dietician at hospitals in St. Louis. After her ministry in hospitals, she supervised the kitchen at St. Scholastica Retreat Center until she retired in 2001.

Sister M. Thérèse Johnson, OSB, originally from Valley Center, Calif., was once married and had two children, Becky and Michael. As an oblate of Prince of Peace Abbey in Oceanside, Calif., she felt inspired by the Benedictine monks as well as her parish priests. Encouraged by her grown children to respond to the call that she had felt as a little girl, she entered Holy Angels Convent in Jonesboro in 1992, making first profession in 1994 and perpetual profession in 1998.

Her first assignment was in the business office at the motherhouse, where she served for more than seven years. Her years in education before entering religious life gave her a great love for teaching, which she has shared with students for 26 years in religious education classes at St. Mary Church in Paragould, St. Paul Church in Pocahontas, St. Anthony Church in Weiner, Blessed Sacrament Church in Jonesboro and St. Michael Church in West Memphis. Sister Thérèse has also served the community as librarian, vocation director, assistant to the liturgist and organist and subprioress. Currently, Sister Thérèse teaches religious education at St. Anthony Church in Weiner and is the community sacristan.

The 2018 collection for the Retirement Fund for Religious enabled the National Religious Retirement Office to distribute direct care assistance to 360 religious institutes, including two based in Arkansas.

In Little Rock, the Discalced Carmelite nuns received a grant for $23,390.58. At Subiaco Abbey, the monks were given a grant for $47,843.91 to care for their retired members.