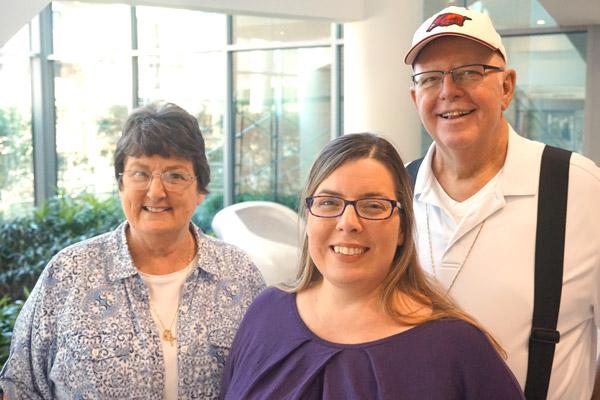 Aprille Hanson
Deacon Butch King and his wife Debbie (left) stand with their daughter Paula Draeger (center) in front of the Seed of Hope garden at UAMS Winthrop P. Rockefeller Cancer Institute in Little Rock Dec. 4. Last month, King was able to place a seed of hope token into the garden, signifying he is cancer-free, thanks to a stem cell donation from his daughter.

Aprille Hanson
Deacon Butch King and his wife Debbie (left) stand with their daughter Paula Draeger (center) in front of the Seed of Hope garden at UAMS Winthrop P. Rockefeller Cancer Institute in Little Rock Dec. 4. Last month, King was able to place a seed of hope token into the garden, signifying he is cancer-free, thanks to a stem cell donation from his daughter.

Read more inspiring stories about Catholics in Arkansas that have kept the faith through suffering:

Deacon Butch King was given a gift in 2017. He was diagnosed with a rare disease — MDS/MPN, myelodysplastic/myeloproliferative neoplasm-unclassifiable to be exact.

The hybrid disease results when bone marrow overproduces unhealthy blood cells, according to University of Arkansas for Medical Sciences in Little Rock.

The diagnosis sent the family on a harrowing journey for the next two and a half years: four changes of insurance coverage and medical facilities, 19 rounds of chemotherapy, 430 lab results, 14 bone marrow biopsies, 11.25 gallons of donated blood and the disease progressing to Acute Myeloid Leukemia.

Looking at a deadly disease as a gift takes a radical faith in God, one that King and his wife Debbie have carried with grace to his cancer-free diagnosis Nov. 4.

“It was given to us as a gift. And how do we manage gifts? We care for them, we nurture them, we polish them, show them off with pride and we give thanks to God. Those are his words, our words together. We had a gift and we had to manage it, we didn’t get a choice,” his wife said.

King was ordained a deacon in 2012, serving at Immaculate Conception Church in North Little Rock. The couple has four children, 12 grandchildren and six great-grandchildren, with another on the way in March. After 23 years of serving in the U.S. Air Force working in secure communications, he spent 22 years with the U.S. Postal Service.

In October 2016, he had a metal stent placed in his heart and could not have any surgeries for the following six months. In November of that year, he twisted his knee at work. When he was finally ready to have knee surgery in May, his lab work was irregular. In June they learned he had developed a rare blood disorder, MDS, which later in the year progressed to MPN. It required a stem cell transplant, with only a 30 percent chance of surviving a transplant.

“I was kind of stunned at first,” King said. As a deacon, he had been used to visiting the sick in nursing homes and hospitals.

“This is one of the stories you can say, ‘I know how you feel because I’ve been there’ or ‘we’re praying for you’ and really mean it,” he said.

With every roadblock of insurance not covering the procedure or a hospital turning the transplant down because he was high risk, faith prevailed.

In December 2017, their youngest daughter Paula Draeger, 38, was a perfect match for a stem cell transplant, an extremely rare result.

“OK, we can do this; we’re going to heal him. We’ve got the perfect match. If this doesn’t work, nothing will. So that was just kind of the reaction, let’s do it,” the married mother of two said.

Debbie King said, “She’s a Spina bifida baby. We were told that she would be a vegetable when she had her spinal surgery. So she’s a miracle to be here; long before this ever came God had a plan.”

Once Medicare kicked in, insurance would cover a transplant if a clinical trial was available. It led the family to 13 visits to University of Oklahoma Stephenson Cancer Center in Oklahoma City, though they refused the transplant.

Debbie King said they specifically chose Oklahoma City because the family had been, and still are, praying daily for Blessed Stanley Rother’s intercession.

The martyr, who grew up on a farm in Okarche, Okla., was declared blessed on Sept. 23, 2017, in Oklahoma City. He was killed in 1981 while serving his people in Guatemala.

“He needed a miracle. And we said God provides miracles,” Debbie King said.

“Before we started any treatment we would place the entire illness and what would be happening at Blessed Stanley Rother’s” gravesite in Oklahoma City, visiting 11 times, she said.

“What’s the miracle? The miracle is the faith. And that’s what Butch has said,” she said.

On March 13, the Kings were told they wouldn’t be continuing the trial in Oklahoma.

“We were ready to just be on maintenance and enjoy the days we had,” she said. “… On March 14, our 44th wedding anniversary we were celebrating what we thought could be our last one.”

But Dr. Appalanaidu Sasapu, hematologist oncologist with the UAMS Stem Cell Transplantation and Cellular Therapy Program, never gave up on them. Because King’s disease had progressed to leukemia in April, the stem cell procedure could now be done at UAMS and covered by insurance.

Draeger said the stem cell donations, done over a weekend via a port, were simple, with no side effects aside from building her energy up in the following week.

“For what you’re able to give somebody, what you have to endure pales in comparison to what he’s been through and what you can give him,” she said.

King no longer has the blood disease and is cancer free, though he will continue at least a year’s worth of chemotherapy treatments.

Since his diagnosis, they attend the smaller St. Patrick Church in North Little Rock for Mass, but he cannot yet return to ministry.

“We do our prayer time in the mornings and evenings, we count our blessings every night before we go to bed and we just know, what was our blessing today? Did we see somebody that we haven’t seen before that God put in our path? Is it a new doctor who is going to take this on?” King said.

“But through this whole process we’ve been truly blessed, had no regrets. If I had to do it over, if that’s the path of my life that God wants me to take, then I’ll do it.”

Read more inspiring stories about Catholics in Arkansas that have kept the faith through suffering: