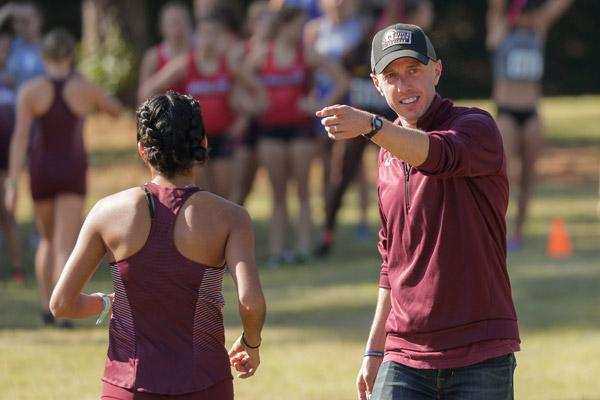 Running the race, keeping the faith

Read more about inspiring Catholic runners who cling to their faith:

Alan Webb has visualized many a finish line in his stellar running career. An Olympian and American-record holder in the mile and high school mile, he’s well-versed in the mechanics of setting a goal and then working to attain it.

This summer, Webb brought that experience to Little Rock, joining the staff of the UA Little Rock Trojans as distance coach. There, he guides young athletes to their own personal bests on the track and off.

Webb’s coaching mentality is standard stuff, until you discover that he’s not just talking about racing. The father of three and parishioner of Christ the King Church in Little Rock keeps the larger race of faith at the forefront of everything he does.

“I believe good leaders know where they are going, and great leaders go towards God.” Alan Webb

“I’m a follower of Christ, and I’m going towards him. I believe that in order to be a good leader for others, you have to know where you’re going. And that’s where I’m going.”

He spent two years running for the University of Michigan during which time he won a Big Ten cross country title and in the outdoor 1,500 meters. A two-time All-American, he turned pro after the 2002 collegiate season, signing with Nike.

UA Little Rock is Webb’s biggest coaching job to date with previous positions coming at the high school level and last season as an assistant with Portland State. There, he helped lead the Vikings to their best cross-country season in program history.

“I believe in positive coaching. I’m an encourager,” he said of his coaching style. “I try to make sure that with everything that they’re doing, they know they’re accomplishing something, even if it’s very small. Just the fact that they show up and do the work is something in and of itself and I want that to be rewarded and want them to know what that’s doing to help them.”

Webb and his wife Julia spend their free time keeping up with their three daughters, Paula, age 4; Gabriella, who will soon turn 1 and Joanie, age 7 who’s a second-grader at Christ the King School. Webb praised Christ the King Parish for providing a positive, faith-filled environment for his family, something he carries over to his athletes.

“My goal is to have everything I do reflect my journey toward Christ and hopefully, in some tiny way, that can affect someone else and steer them in that direction,” he said. “I work at a public institution so I understand that role, but at the same time I will not abandon my direction. I believe good leaders know where they are going, and great leaders go towards God.”

Running the race, keeping the faith

Read more about inspiring Catholic runners who cling to their faith: