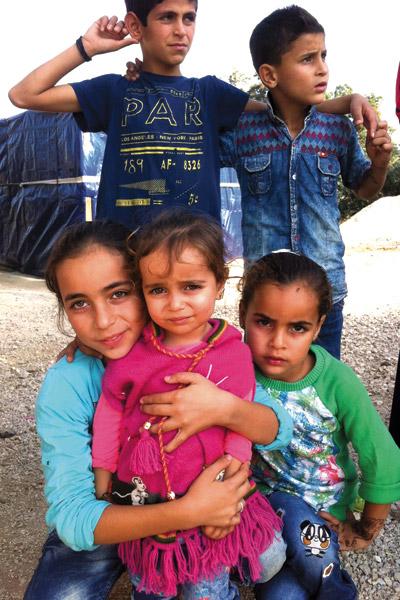 File photo, courtesy Daniah Al-Nadawi
Refugee children ages 2 to 7 are seen in a Syrian refugee camp south of Istanbul, Turkey. Daniah Al-Nadawi, former refugee and now a U.S. citizen who spoke to Arkansas Catholic for a 2017 story, volunteered with the children in 2015 and 2016.

File photo, courtesy Daniah Al-Nadawi
Refugee children ages 2 to 7 are seen in a Syrian refugee camp south of Istanbul, Turkey. Daniah Al-Nadawi, former refugee and now a U.S. citizen who spoke to Arkansas Catholic for a 2017 story, volunteered with the children in 2015 and 2016.

Trickle of refugees into Catholic Charities of Ark. dries up (May 5, 2018)

Canopy group will make sure refugees are covered (April 4, 2016)

Signed in September, Trump gave states until Jan. 21 to decide.

In Arkansas there are two refugee resettlement programs. The oldest is run by Catholic Charities in Springdale. Canopy NWA was founded in 2016. While Catholic Charities serves new refugees within a 100-mile radius of Little Rock, Canopy NWA focuses on northwest Arkansas, per state guidelines.

“It was critical because with him giving consent that now allows all the municipalities and counties to give consent as well; it gives everybody a chance to continue the tradition of welcoming refugees and resettling them in our communities,” said Jennifer Verkamp-Ruthven, interim director of Catholic Charities Refugee Resettlement Office in Springdale. “Arkansas doesn’t resettle as many as other states, but I know the ones that have been resettled here it’s been successful. They’ve contributed to our communities and continue to do so, and I think it goes in line with our values allowing people who have suffered extreme trauma to have a new beginning and fresh start.”

According to a Dec. 31 Associated Press article, more than 30 governors opted to allow refugees to settle in their states, with no one yet prohibiting resettlement. Approvals must be written and if a state governor prohibits it, no local governments can settle refugees.

According to the executive order, cities, towns and counties also must consent or refuse refugee resettlement. Emily Crane Linn, Canopy NWA director of resettlement, said governments in Washington County, along with Fayetteville and Springdale, have agreed to resettle refugees. Admitting it’s “a little murky,” she explained that it’s her understanding that if a county declines to receive refugees, a city within that county cannot resettle refugees. However, states vary in terms of what control is given to county and city governments.

In November, three resettlement agencies, including Lutheran Immigration and Refugee Services, sued the Trump administration over the executive order, with a court case pending.

“It aligns very closely with what we’ve been talking about together with his (Hutchinson’s) office. A lot of his things he says in there about the values that refugees and immigrants bring to our community is something we know and experience at Canopy,” he said.

Verkamp-Ruthven said the Catholic Charities resettlement office works with the United States Conference of Catholic Bishops Migration and Refugee Services to receive refugees. In 2016, there were three people assured for resettlement, but four years later travel has yet to be secured.

Catholic Charities did not receive any new refugees in 2015-2019.

Canopy NWA, a nonprofit in Springdale that works with Lutheran Immigration and Refugee Services, and partners when needed with Catholic Charities, settled 45 people in 2019. Since 2016, 172 refugees have been resettled in Arkansas through Canopy NWA.

“For some people, it’s literally between life and death,” Linn said, pointing to a 12-year-old girl born in a Tanzanian refugee camp who came to Arkansas in 2018. She immediately received a blood transfusion for sickle cell anemia.

“The doctor who performed the blood transfusion said she would not have survived if she had not been here,” she said.

The Trump administration has dropped refugee acceptance to an historic low, accepting a maximum of 18,000 refugees in the 2020 fiscal year.

The previous cap was 30,000, which ended Sept. 30, 2019, according to an Oct. 7 article from Pew Research Center. It is the lowest projection since the 1980 refugee resettlement program was created by Congress. The U.S. is also no longer the top country for accepting refugees. According to a Dec. 26, Houston Chronicle article, the cuts closed at least 51 resettlement programs and caused 41 offices to suspend refugee services in the U.S.

While Verkamp-Ruthven said she’s “very, very appreciate to Gov. Hutchinson for making this decision, it’s huge,” the U.S. cap on refugees limits their ability to make even a dent in the overall refugee crisis.

“It’s a drop in the bucket … We’re not the saviors in this one; people like to think that we are,” she said.

In his Christmas address Dec. 25, Pope Francis prayed for protection of people forced to emigrate, saying “It is injustice that makes them cross deserts and seas that become cemeteries. It is injustice that forces them to ensure unspeakable forms of abuse, enslavement of every kind and torture in inhumane detention camps.”

“It is injustice that turns them away from places where they might have hope for a dignified life, but instead find themselves before walls of indifference,” he continued.

From Jan. 20, 2017, to Sept. 30, 2019, the United States has admitted 76,200 refugees under the Trump administration. In contrast, in the 2016 fiscal year, 85,000 refugees were admitted under President Barack Obama’s final fiscal year. Schnekloth said getting back to welcoming around 75,000 annually, the historical norm, needs to happen.

“What it seems to be designed to do is to dismantle the refugee resettlement program in the United States,” Schnekloth said. “It means we’re not currently meeting our moral commitment to welcome refugees at all … We’re at risk of really no longer being a nation that resettles refuges and definitely no longer a leader in refugee resettlements.”

Trickle of refugees into Catholic Charities of Ark. dries up (May 5, 2018)

Canopy group will make sure refugees are covered (April 4, 2016)