A Catholic you want to know: Mary Alyce Shenker 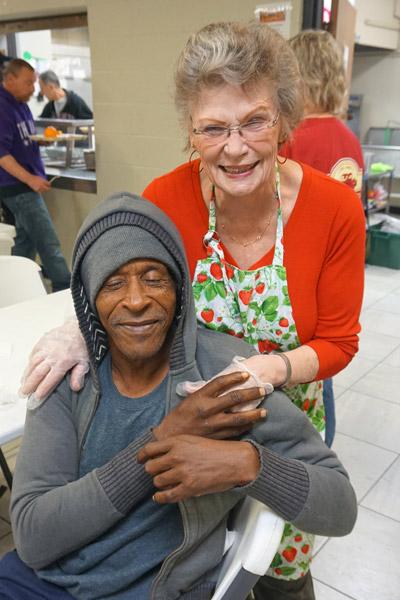 Aprille Hanson
Mary Shenker, a parishioner of Christ the King Church in Little Rock, takes a break from serving breakfast at the Salvation Army shelter in downtown Little Rock Jan. 13 to hug her friend Tree.

Aprille Hanson
Mary Shenker, a parishioner of Christ the King Church in Little Rock, takes a break from serving breakfast at the Salvation Army shelter in downtown Little Rock Jan. 13 to hug her friend Tree.

Why you want to know Mary Alyce Shenker: After working as a nurse, including two years in the U.S. Air Force Nurse Corps and then 35 years as a nurse anesthetist, Mary Shenker fully retired around 2011, fulfilling her promise to God: “I promised the Lord when I retired, I would start working for him.” For the past 10 years, she has led a team of about 20 people, about half Catholic, serving a hot breakfast on Mondays at the Salvation Army shelter on West Markham Street in downtown Little Rock. Shenker and her team purchase the food, cook most of it before arriving around 6 a.m. and stay until around 8 a.m., serving approximately 90 to 120 people, both abused women and families from the shelter and then later men who come in from the street, referred to as “friends.” Shenker accepts private donations for the breakfast — which is not funded by Salvation Army — and receives a grant from her parish.

What feeds you spiritually?
It goes back to my childhood. My mother she used to — back then they were called “hobos” — they used to come around, we lived in the country, and she used to feed them. So that’s where I got it as a child, I saw that happening. Then as I got older it kind of went away. Then … I went to Honduras. I went to Honduras for 10 years in a row to serve (with the former Christ the King mission). ... That’s where the Lord really grabbed me is in Honduras … I saw such peace in their faces, and they had absolutely nothing. When I came back, the Lord said to me, “Now you can do something here.”

The breakfast ministry started years ago, thanks to people like the late Robert Johnston and Mary Wildgen, who also attends Christ the King. What does it mean to carry on this tradition?
We tell them we’re going to give them human respect, love and food … Our main goal is for our friends to get a little bit of peace in here and certainly respect. It’s about humanity. It’s about injustice. I can see the injustice. These friends are people that nobody wants to talk to, you see them on the sides of the street begging, a lot of them don’t, some do … All of them are very respectful to the Lord. I pray before we start, then I go out and pray with our friends and I never have a problem getting someone to say a prayer … They always pray for each other and they always thank God they got up in the morning.

What has touched your heart in working with the homeless?
It makes my heart happy when someone comes up to me and says, “Mary, I got a job.” They call me Mother Mary or Mama … I give them a hug and I try to give them bus tokens until they get their first check. And then they’ll come up and say, “I’ve got a home.” Jericho Way is wonderful; they help them get a home or apartment.

What is the biggest misconception people have about the homeless?
That they’re non-important. I remember when I (lived) in Philadelphia, I would walk by the street, see the people lying in the doorways, you know and just zip by as fast as I could, not acknowledging anything … I was in Hot Springs one time with my friends and we were walking somewhere to eat, we had a nice day, a lady came up to us and asked for $1 and we said no, we’re not going to give you anything. Well, I still remember that. We could have given her $1 … Those are the things that stay in your mind spiritually, so the Lord tells you to keep on doing this. I’ll do it until I can’t do it anymore.