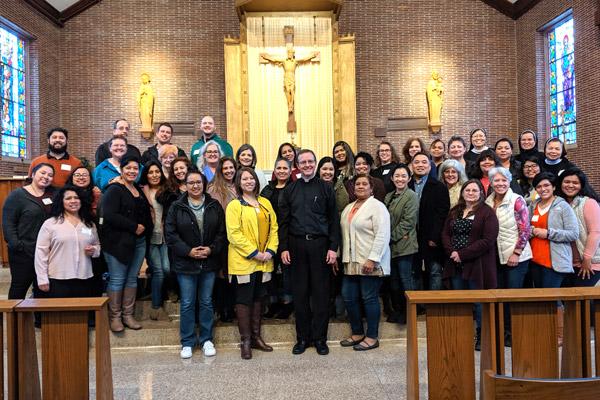 The Diocese of Little Rock hosted a one-day retreat Jan. 11 at St. John Center in Little Rock for 57 ministers and catechists from around the state ... (Photo)

What to say in confession after 10 years away?

Q. I have not been to confession in at least 10 years. I want to go, but I have no idea what to say. How am I to remember all of my sins and the number of times that I have committed them? (Question Corner, Seeds of Faith)

I hate New Year’s resolutions. I feel like I am just setting myself up for failure. Every year I come up with some grand ideas to improve my life, and every year inevitably, I eventually give it up. (Columns)

What is the debate on celibacy about?

In one of those embarrassing public dust-ups that occasionally afflict our Church, a soon-to-be published book on priestly celibacy was publicized as being co-authored by retired Pope Benedict XVI until he let it be known that he was not the co-author and wanted his name removed as such. (Columns)

On Jan. 2, more than 200 members of Congress called on the Supreme Court to reconsider and, “if appropriate,” to overrule Roe v. Wade when the justices decide this spring the fate of a Louisiana law that requires abortion providers to have admitting privileges at nearby hospitals. (Guest commentary)

Public school prayer back in spotlight

Do you remember the story of William McLeod, a student at a public school in Utah, who was ordered to remove his ashes on Ash Wednesday last year? (Editorial)

What you need to know is in Arkansas Catholic

What are you waiting for? Subscribe to Arkansas Catholic